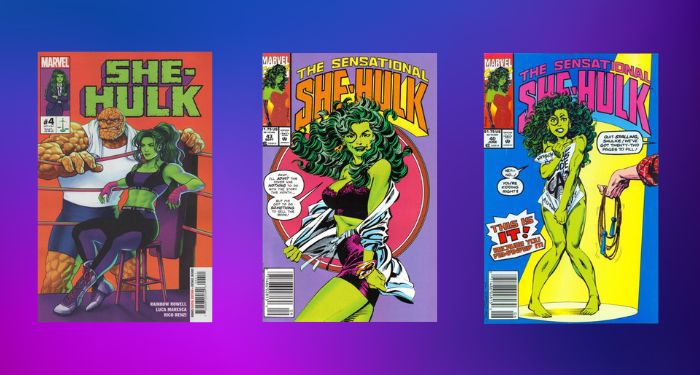 Superhero comics are not traditionally known as a particularly welcome space for women. Though people of all genders have always read comics, the medium in general and superhero comics in particular have a reputation as an old boys’ club. This isn’t helped by the seeming reluctance of major publishers to hire women, the rampant sexual harassment in the industry…or the art.

Oh, the art. As far back as the ’40s, comic book artists have been getting their jollies with highly sexualized depictions of women. The Comics Code explicitly (ha) reined this in for a time, but as the Code grew weaker, the cheesecake grew stronger, and by the ’90s, artists were shamelessly indulging their prurient sides, with little concern for any adverse effects on storytelling, character, or even physics. The situation has improved drastically over the past decade, but we’re by no means in the clear. The blog Escher Girls has been faithfully documenting some of the most egregious examples for many years.

And then there’s She-Hulk.

You’d think She-Hulk comics would be considered one of the worst casualties of this trend. In the already sexualized landscape of comics art, she’s a cheesecake icon. She’s as famous for it as her cousin is for purple pants and irascibility.

But it works. So how come? When so much gratuitous cheesecake art is offensive, annoying, or just depressing, why are She-Hulk’s cheesecake tendencies so damn charming?

Most of it comes down to John Byrne, and the Sensational She-Hulk comic he wrote and drew starting in 1989. These comics introduced a new gimmick to Shulkie’s existence, from basically out of nowhere: she can break the fourth wall. Yes, Deadpool fans, Jen Walters did it first. Over the course of the Byrne run, She-Hulk complains about her comic’s plot lines and sales, tears through pages, steps across panel borders to get to new locations more quickly, and berates Byrne himself, basically constantly.

This means that Jen is positioned as, essentially, a fully cognizant participant in her own cheesecake, albeit sometimes an irritated one. Now, obviously She-Hulk is a fictional character and can’t do anything she isn’t written and drawn to do; she can’t have real agency because she’s a pretend lady. But there’s something really refreshing about seeing her comment on absurd outfits and contrived salaciousness in these She-Hulk comics, instead of, I don’t know, pretending that most women really lounge around the house in a thong and a midriff-baring tube top and fight crime vagina-first.

On the cover of Sensational She-Hulk #39, She-Hulk sprawls upside-down in the arms of a shirtless, hirsute villain (whose name is Mahkizmo, in case the joke was too subtle for you), clad only in a narratively illogical bikini. “Don’t get the wrong idea,” she says, “I’m only doing this because it makes a good cover!!” On the cover of #43, she poses in a lacy purple bralette and miniskirt, white blouse ripped open, saying: “I’ve got to do something to sell this book!” By having She-Hulk engage with and comment on the cheesecake, Byrne never lets the reader forget that this woman has a personality and a brain in her head. It helps that Byrne was at his artistic heights with this book — his Jen is beautiful, and #43 in particular is one of the most stunning covers of the run.

The most infamous She-Hulk comics cover is probably #40, which depicts Jen apparently totally naked and frantically covering herself with an oversized Comics Code Authority seal. (Hilariously, the real CCA seal is present on the cover, right to the left of her head.) “THIS IS IT! BECAUSE YOU DEMANDED IT!” a burst declares, while a hand, presumably Byrnes’s, holds out a jump rope.

The first four interior pages of the comic are splash pages, each one depicting She-Hulk jumping rope, apparently in the buff, while the motion lines of the rope obscure enough to keep the art PG. All the while, she gripes about how low Marvel will sink to get sales — until her editor, Renée Witterstaetter, walks onto the page and yanks the rope away, revealing that she was wearing a bikini the whole time. “Anybody who was dopey enough to think you could really be skipping rope in the nude deserves to have wasted his money anyway!” Renée proclaims, pushing Jen onto the next page and into the story.

All this nonsense takes up seven pages — more than a quarter of the book! And it’s hilarious, and absolutely delightful. It works because it’s so playful; because it’s self-aware enough to acknowledge exactly what it’s doing; and because it manages to hit a balance between turning the joke around on the readers without ever feeling mean about it, or shaming Jen. She’s often annoyed by the risque shenanigans she’s put into, but she’s never humiliated by them, and that’s a key distinction. (The female editor on the book probably didn’t hurt. God bless you, Renée Witterstaetter.)

Byrne eventually left the book, the book was eventually canceled, and though She-Hulk has flirted with breaking the fourth wall in subsequent comics, she’s never embraced it as wholeheartedly as she did in that run. But she’s retained her cheeky, attention-grabbing personality, at least outside of super-glum crossover events that require her to mope. And she’s continued to show a lot of green skin, especially on covers.

Now look, I’m not going to say no She-Hulk comics art has ever made me raise an unimpressed eyebrow. Greg Horn’s stiff poses and vacuum-sealed spandex on her covers in the mid-2000s will never be my favorite. And cheesecake, like all other forms of art, is entirely subjective. While I find Byrnes’s work on the character to be charming and funny, other readers might still find it exploitative — and that’s totally fair!

But I think The Sensational She-Hulk really highlights the difference between using female characters as a masturbatory prop and using them as characters, even if they’re living in a world that’s a little bit of a sex farce. It makes me feel like I’m in on the joke, rather than the butt of it. And hell, there’s something joyful about seeing a seven-foot-tall, incredibly muscular, bright green woman radiating confidence that is just very fun to read.

I don’t know if the upcoming Disney+ show is going to embrace this element of She-Hulk’s character. I’d be fine if they didn’t, honestly — it’s a lot trickier to do with a real live woman playing the part, and there are a lot of things that can’t make a drawing uncomfortable but could make a person feel less than great. But I do hope they give us Jen’s boundless confidence and joy in her powers, and if they decide to break the fourth wall here and there, I wouldn’t mind.

And when it comes to future She-Hulk covers…have fun, artists. But remember to let Jen have fun, too.

New to She-Hulk fandom? Check out our She-Hulk primer here.