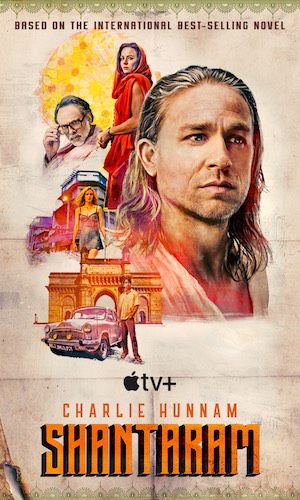 In Collaboration with Apple TV+

Based on the international best-selling novel and starring Charlie Hunnam (Sons of Anarchy), Shantaram follows a fugitive named Lin Ford looking to get lost in vibrant and chaotic 1980s Bombay. Alone in an unfamiliar city, Lin struggles to avoid the trouble he’s running from in this new place. After falling for an enigmatic and intriguing woman named Karla, Lin must choose between freedom or love and the complications that come with it. Shantaram is a hopeful cinematic love story coupled with a thrilling epic adventure that follows one man’s journey to redemption through a country that changes his life.

After talks of production since 2004, an adaptation of the bestselling book Shantaram by Gregory David Roberts is coming to Apple TV+ on October 14. The adaptation stars Charlie Hunnam as Lin, an Australian bank robber who escapes from prison and flees to India.

Shantaram is a story of duality — of crime and altruism, murder and healing, and maybe even a little redemption. Before he makes his way to India, Lin commits an armed robbery to nurse a heroin addiction. Equipped with a fake passport and desperate to disappear, he eventually flees to Bombay, India (now Mumbai), where he hopes to disappear into a sort of anonymity. Instead, he struggles to find himself while running a clinic in one of the city’s most disadvantaged areas, managing to get pulled deeper and deeper into Bombay’s dark underworld. He simultaneously fights to heal the sick as he becomes more involved with murderers, gangsters, and the mafia. Readers follow Lin as he falls in love with India while trying to overcome a past that has rooted itself in the present.

The novel Shantaram was based on was published in 2003 to great acclaim and was loosely based on the author’s life. He, like the novel’s narrator Lin, also committed armed robbery to supply a heroin addiction and was known as “the building society bandit” in Melbourne, Australia. And, after being sent to prison, also escaped in broad daylight. He, however, spent 10 years running before he was finally arrested in Germany where he spent the better part of two years in prison. Later, he was extradited back to Australia, where he served another seven years. Two of those years were spent in solitary confinement, where he was able to write Shantaram.

Despite its popularity shortly after being published — and interest from some of Hollywood’s leading actors — the book’s adaptation has had a long road to being actualized. Soon after being published in 2003, Russell Crowe made his interests in the adaptation known. Then, in 2004, Warner Bros. paid millions for the rights to a movie that would star Johnny Depp. Once the director, Peter Weir, left the project in 2006, it would take another seven years for there to be any talk of the movie again. Joel Edgerton was positioned as the movie’s new lead in 2013, but no adaptation was made.

Eventually, Warner Bros.’s rights to the movie expired in 2015, after which production company Anonymous Content and Paramount Television Studios were able to acquire the rights, with the final product going to Apple. What was planned as a movie adaptation of 900+ pages turned into a more manageable show series stretched out over several episodes.

What to expect from the first three episodes of Shantaram

The new show has 12 hour-long episodes and boasts Steve Lightfoot as its showrunner (The Punisher and Hannibal). It starts with Lin’s aforementioned escape from a Melbourne prison and a backstory that reveals him to have studied to become a paramedic, a career path that was sacrificed by his addiction. Once he flees to 1980s Bombay with a fake passport and new identity, he eventually finds himself in the poverty stricken Sagar Wada. His guide turned friend Prabhu, played by Shubham Saraf, helps him adapt to his new home and shows him the merits of opening up a clinic for people in the area.

The show seems set to subvert the usual expectations that come with shows where an outsider exhibits some form of saviorism. It does this by questioning whether the community Lin is in would be better without him, and even if his brand of altruism isn’t purely self-serving. This constant questioning is an example of balance throughout the show. A balance that is exemplified by his friend Prabhu’s inherent goodness against other characters, many of them expats with questionable morals, like Afghan mafia leader Abdul Khader Khan (played by Alexander Siddig) and the alluringly mysterious Swiss American immigrant Karla (Antonia Desplat).

Shantaram‘s cinematography and number of characters and subplots make for a rich viewing experience that really captures the complexity of Lin’s struggle set against the backdrop of a beautiful country.