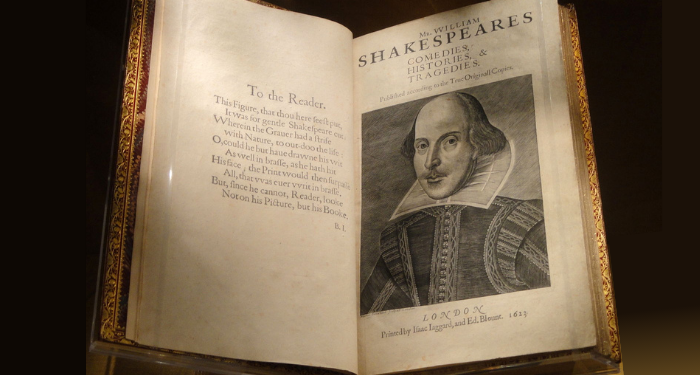 On October 29, 2021, a fragment — 13 pages, comprising the whole of Henry IV Part One — of Shakespeare’s First Folio will be up for auction. Its value is estimated at $50,000–100,000, and bidding will begin at $26,000. Fred Holabird, the president of auction house Holabird Western Americana Collections, says it is “of inestimable value.” So, what is this fragment, and why is it so valuable?

Shakespeare’s First Folio was the first printed collection of his work. It was compiled and published in 1623, seven years after his death, by John Heminges and Henry Condell, actors and friends of the Bard. Its proper name is Mr. William Shakespeare’s Comedies, Histories, & Tragedies and it contained 36 plays, only half of which had previously been published in quartos (basically pamphlets). At that time, it was common for plays to be unavailable in printed form. Experts estimate that 750 copies of the First Folio were made, and about 235 are known to remain in existence (56 of them complete). These are owned by libraries, universities, museums, and private collectors. The Folger Shakespeare Library has the world’s largest collection, at 82 copies.

Shakespeare’s Second Folio (and Third Folio and Fourth Folio) are essentially reprintings of the First Folio. Each edition has slight changes to the text that make them identifiable.

Last year, a rare complete copy became the most expensive book ever sold, when Mills College sold it at auction for a little under $10 million. The buyer, rare book collector Stephan Loewentheil, said: “The first folio is the most important collection of plays ever published and revered throughout the world. It is an honor to purchase one of only a handful of complete copies of this epochal volume.” Complete copies come up for sale very rarely — the previous one sold in 2001 for over $6 million.

The fragment in question has been rebound, most likely by Sangorski & Sutcliffe in London for previous owner Dr. Otto Orrin Fisher, whose name is inscribed in the binding. Dr. Fisher, who died in 1961, had a collection of rare books and manuscripts numbering over 80,000 individual works. In 1949, he gave four complete copies of the First Folio to his alma mater, the University of Miami. It is believed that many fragments were in his collection at the time of his death.

The fragment was authenticated last month by Dr. Eric Rasmussen, University of Nevada, Reno, Professor and Department Chair of English and Philosophy, world-renowned Shakespearean scholar and one of the leading experts on Shakespeare’s First Folios. Among other accomplishments and publications, Dr. Rasmussen edited Shakespeare First Folios: A Descriptive Catalogue.

According to Holabird’s auction listing, Henry IV was one of Shakespeare’s most popular plays, and printed copies would have been cared for and treasured — a fact which may have contributed to the longevity of the fragment’s survival in the 17th century; now, of course, all known fragments are cared for, but at the time they likely would not have been considered as valuable.

The condition of the fragment is described as “very fine,” with some expected wear and tear including small chips and tears, and one double-sided page missing. According to Dr. Rasmussen, missing pages are normal and expected, and even complete copies of the First Folio may be missing up to 40% of the original 900 pages.

The auction will be held on Friday. You can view scanned pages of Shakespeare’s First Folio online.