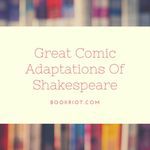 On November 13th, The Hollywood Reporter posted a piece announcing  Spike Lee will be directing a film vision of Ronald Wimberly’s Prince of Cats, a “1980s-set hip-hop take on Shakespeare’s Romeo and Juliet.” This isn’t the first time the story has been adapted to modern sensibilities: Baz Luhrmann’s 1996 film was wildly popular, and I don’t know about y’all but we watched the 1968 version, boobs and all, in 7th grade English.

Why do these particular stories translate so well from page to screen? Because while we sit and read Shakespeare now, the original intent was for the story to unfold live before an audience. For people to watch the action unfurl in real time and even maybe even participate. The interaction between characters and audience doesn’t, and can’t, happen amidst the pages of a massive tome.

A medium that integrates text and visuals though? Well, that would be just perfect for those accustomed to reading the bard (bards?) but longing for the missing piece.

Good thing we have graphic novels… 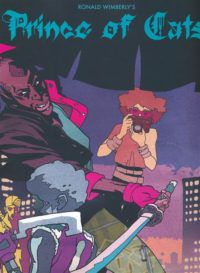 This book is gorgeous and textural and incredible. Set in the ’80s with a neon color palette to match, Wimberly’s work, according to Professor John Jennings who wrote the introduction to the collected edition, “…isn’t just a mishmash of things he digs. Yes, it’s Romeo and Juliet meets Kurosawa meets The Warriors meets Planet Rock. However, what makes Prince of Cats so innovative is the fact that it acts as a reified index of that Hip Hop culture would manifest itself as visually…deals with notions of class, race, and gender through this unlikely courtship of comics, Hop Hop, and the works of Shakespeare…a black speculative space that explores the construction of black masculinity, notions of good and evil, and the nuanced storytelling methods that are totally part of the affordances of the comics medium.”

The characters are almost as kinetic as living actors, with almost impossibly nuanced facial expressions and movement. The language is pure Shakespeare and pure Brooklyn, the connection of past to present, of sonnets to hip-hop flawless.

In case you’ve ever wondered about the book’s title: Tybalt shares a name with the character Tybalt/Tibalt, Prince of Cats, from the medieval Reynard the Fox tales. In them, Tybalt is often outsmarted, and falls prey to, the clever fox. Mercutio uses the sobriquet as an insult when he hurls it at Tybalt in Romeo and Juliet, foretelling Tybalt’s rather inglorious end. 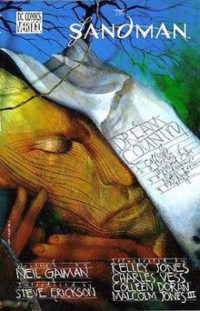 The Dream Country contains four Sandman arcs: Calliope, A Dream of A Thousand Cats, Façade, and A Midsummer Night’s Dream. In the last, Gaiman envisions a premiere of the titular play being performed for an audience of fae, including those named in the work: Titania, Puck, and Auberon, and Peasblossom. Of course, being Sandman, it isn’t all love potions and harmless tricks; Puck, for example, while enjoying the performance, injures the actor portraying him and takes his place, while Titania finds herself drawn to Shakespeare’s son, Hamnet. And we all know how her attentions end up…

This issue won a World Fantasy Award for short story in 1991. It is the only comic to have done so. 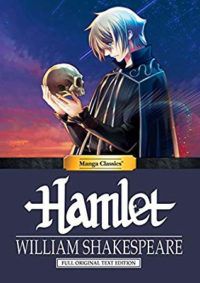 Is Shakespeare universal? Is any literature? Do we want it to be? Does the Prince of Denmark change when translated to manga? Are there aspects of his quest for revenge we, as Westerners, may not have considered? Unlike other manga versions of Shakespeare, this Hamlet isn’t a direct translation to a particular visual form: it’s adapted as well as illustrated, which can mean any one of a number of things. How does that manifest with a play so many of us know so well?

This one is definitely coming to live with me next time the fam heads to ye olde LCS. 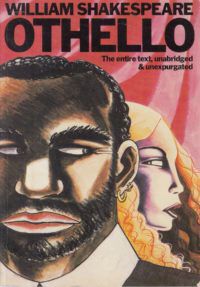 Othello (Graphic Shakespeare) by Oscar Zárate (Can of Worms Press, 2011)

Zárate’s art drew me to this version of Othello, which contains Shakespeare’s full text beside highly stylized, almost ’80s style blocky illustrations…in my head, this is a bit like what a comic book drawn by Warhol would look like, but with the emphasis on the artists’ control of his form rather than the Pop art vision of “anything can be art.” Does that even make sense? My brain thinks so. Like Prince of Cats, this is a very affecting, very compelling fusion of classic and modern that, in description shouldn’t work but on the page combines into something new and special.

I’ve never minded reading Shakespeare, but I’ve always preferred watching his (their?) stories as active creatures rather than words in hibernation. Graphic novels give us the best of both worlds: a wonderful chimera of words and living characters, all in the comfort of your favorite chair. Where you won’t get hit with rotten vegetables if others don’t enjoy the performance.