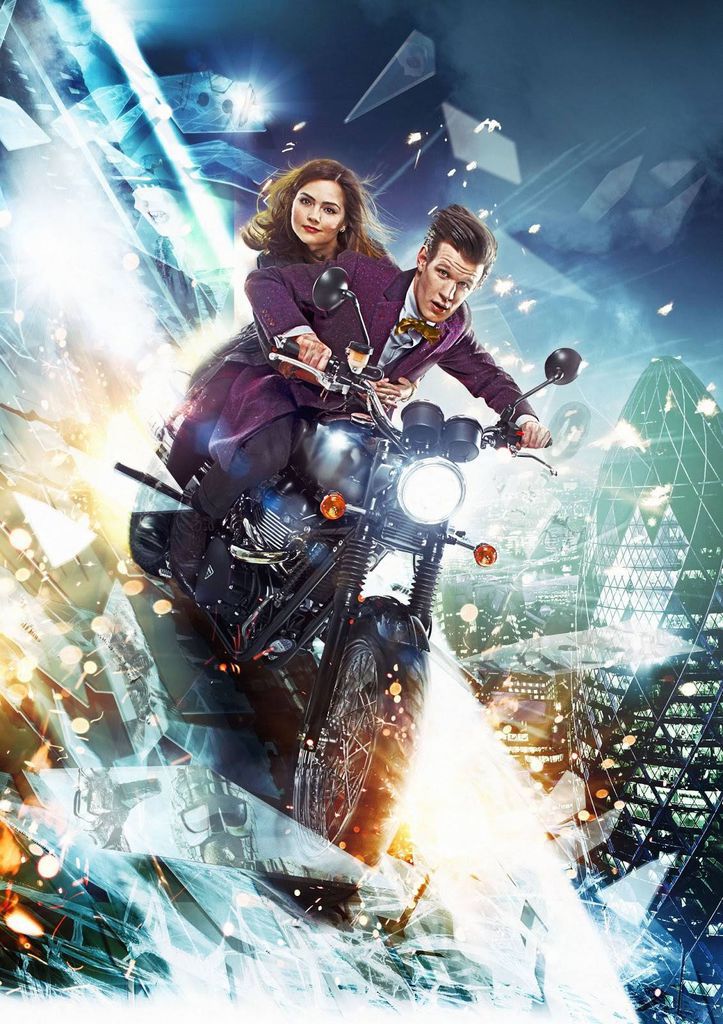 Doctor Who is essentially a literary character. It is just a happy galactic coincidence that he got lost on the way to a book and ended up on our tellies. He is more than welcome.

No wonder he is such a pin-up for readers.

And that lies at the heart of this great show: ideas. Take, for example, the Weeping Angels. They are the most unnerving beasties the Doctor has encountered since he returned in 2005. And yet on screen they are static. They only move when we turn away or blink. Their monstrosity lies in the unseen recesses of our heads.

To mark The Doctor’s return to our screens this weekend here, in no particular order, are seven reasons why the Doctor is as much a literary hero as a televisual one.

All the best people are. And in the 2008 episode, Silence in the Library, set inside the biggest collection of books in the universe, we discover it’s the smell of books that keeps them alive for millennia to come.  New technology be damned. To quote The Doctor: “Books. People never really stop loving books. Fifty-first century. By now you’ve got holovids, direct-to-brain downloads, fiction mist. But you need the smell. The smell of books.”

We’ve all been there. Trapped in an isolated Scottish house with a werewolf, kung-fu monks and Queen Victoria, The Doctor finds time to wax lyrical on the power of books:  “You want weapons? We’re in a library. Books are the best weapon in the world. This room’s the greatest arsenal we could have. Arm yourself!”

When confronted with Charles Dickens the 900 year-old Time Lord, who has seen the rise and fall of galaxies, rebooted the universe, and been to the end of time itself, acts just like we would. Basically, turning into a big ball of gush:

4 – He is responsible for Miss Marple and Murder on the Orient Express.

Well, not The Doctor specifically, but his companion Donna Noble in the 2008 episode The Unicorn and The Wasp. Whilst battling a (frankly silly) intergalactic wasp, Donna lets slip a few spoilers of Christie’s future career:

The character of the Doctor is so compulsive, great contemporary authors want to put words in his Gallifreyan mouth. The Hitchhiker’s Guide To The Galaxy writer Douglas Adams was a script editor in the 1970s, penning a season long story arc called The Key of Time for the Fourth Doctor, and Neil Gaiman has long been a fan. He said: “Doctor Who has never pretended to be hard science-fiction. At best, Doctor Who is a fairytale, with fairytale logic, about this wonderful man in this big blue box, who at the beginning of every story lands somewhere there’s a problem.” And he went on to write one of the best episodes in recent years, The Doctor’s Wife, where The Doctor meets the TARDIS in human form. Apparently it is us, humans, that are bigger on the inside:

6 – He gets wrapped up in myths

In 1963 the BBC commissioned Doctor Who as an educational series. The grand idea was he would travel around time and space, visit great historical moments, inform the youth as you go. That lasted only five episodes until the universe’s most homicidal pepper pots, the Daleks, were introduced. But that public service reflex lingers on. The Doctor has encountered countless literary figures from history, including half the cast of The Iliad in 1965’s The Myth Makers and a gallery of fairy tale characters in 1968’s The Mind Robber:

The Shakespeare Code from 2007 had great fun playing with Shakespearian mythology. It featured the famously lost play, Love Labours Won, had The Doctor planting a seed for the world’s most famous six word musing on existence, and provided a subtle nod to Sonnet 57, aka the one in which Shakespeare might profess his love for another man. All this in family, prime time entertainment. Glorious bookish stuff: