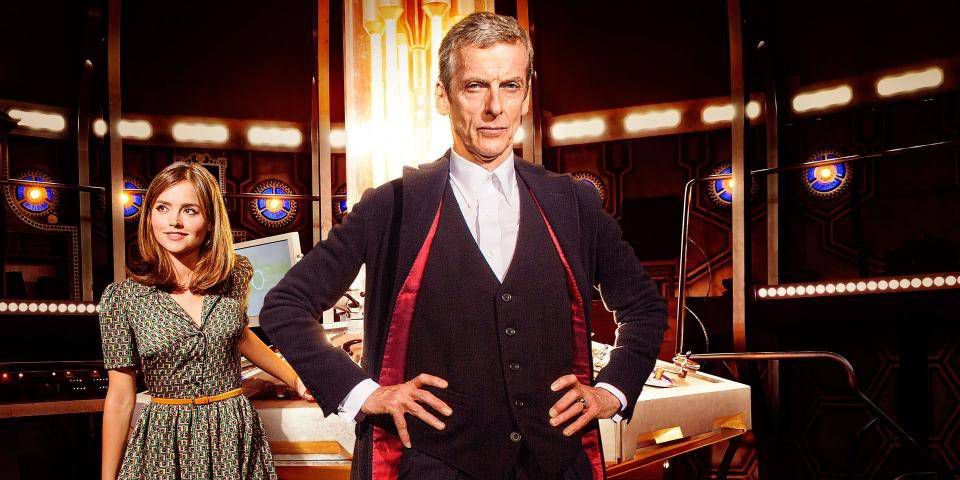 Doctor Who entered my life at just the right time in 2006. I love a good time travel story, and the format of bouncing around time to land in new locations each week was very appealing. I took to the show almost immediately and took the deep dive into the whole history of the show soon after. And it’s only grown from there – books, comics and audio dramas are all ways for me to get my Who fix when there isn’t a series on TV.

With Series 9 upon us, the cantankerous old man and his charming and determined assistant will be careening through time and space to save… all of time and space. As we get ready to see what surprises, twists and turns The Doctor will face this season, here are some comics that can fill the TARDIS-shaped hole in your life between new episodes.

Titan Comics has been doing some really great work with their extensive Doctor Who line. The Four Doctors is a weekly event comic that brings together the Twelfth, Eleventh and Tenth Doctors as well as the War Doctor. Written by veteran Who-scribe Paul Cornell, the three latest incarnations of the Doctor are brought together to foment a temporal cataclysm. Clara Oswald realizes the dangerous game someone is playing with the Doctors’ lives and tries to keep the three versions from meeting, but she’s no match for the three egos at play. Neil Edwards deftly captures the body language and facial contortions of all three incarnations, which instills this miniseries with a true-to-life feeling. It feels like an episode, you can see and hear the actors as the pages turn. As well, this comic serves as a great introduction for readers to meet Titan Comics’ original companions, Alice Obiefune and Gabby Gonzalez, who get some great highlight moments throughout the series. It’s a quick and fun read, which will give something to fans of the new series and old series alike, especially with the return of one of my favorite one-off villains, The Voord.

The Stack Newsletter
Sign up to The Stack to receive Book Riot Comic's best posts, picked for you.
Thank you for signing up! Keep an eye on your inbox.
By signing up you agree to our terms of use
Ivar, Timewalker vol. 2: Breaking History by Fred Van Lente, Francis Portela & Andrew Dalhouse

With the success and popularity of Doctor Who, there have been a lot of series utilizing the formula and conventions of the series. Ivar, Timewalker manages to take the basic concept of an immortal time traveler and his mortal companion and flip it on its ear. Dr. Neela Sethi is on the cusp on inventing time travel when she’s interrupted by a time traveler. At first she doesn’t believe this stranger, but when two others come to kill him – and her! – she takes his hand and makes a run for it through history, from the Battle of Trafalgar to the end of time. While each volume tells a story, the series is best read as a continuing narrative. Inasmuch as this is Ivar’s book, Neela has an equal share, and her character arc is great to watch as it evolves over 8 issues as she meets multiple iterations of herself hellbent on going back in time to save her father, which the rules of time won’t allow. Fred Van Lente has a great grasp on time travel in both a theoretical and fictional regard. There’s some amazing play with the concept of time travel and how it should – and shouldn’t – function. The book evokes feelings of Doctor Who, but it never feels like pastiche. Ivar himself is a fascinating character, as much a good guy as a bit of an ambivalent side player. Volume 2 sees Ivar encounter his immortal brothers Armstrong and Gilad – from Valiant’s Archer & Armstrong  and The Eternal Warrior, respectively – on the path to preserving time. In many ways it resembles the best quibbling from a multi-Doctor story. At it’s heart, it’s a fun sci-fi romp that picks up on themes of loss, love and loneliness all punctuated with a good sense of humor. Check it out, especially if you’ve ever wanted to see Amelia Earhart fly an experimental timeship built by a sentient engineering listserv.

Shan Fong is a doctor of the occult, who uses her ability to talk to the dead and contact the spirit world to help solve crimes and to console the recently bereaved. There’s just one catch, the one person who has passed beyond the vale that she most wishes to contact – her husband, Li Hwen – cannot be reached. Shan gets pulled into an ever deepening mystery surrounding classified military actions and the occult. But , it’s in this dubious quest, which she at first refuses, that she realizes there’s a chance – a small one – to talk to Li Hwen again. In many ways a retelling of Orpheus and Eurydice, we follow Dr. Mirage as she traverses the layers of the underworld, combating demons, all the while her physical form is left in danger in the mundane world. Jen Van Meter spins a story of undying love and a noir-esque mystery that’s hauntingly realized by Roberto de la Torre’s sketchy pencils. The art and colors evoke both the murkiness of the real world and the unreality of the underworld. It’s in these realms that Dr. Mirage reminds me the most of Doctor Who, one person dead set on defying the odds to save a single life.

Teddy’s job is to capture and suppress temporal anomalies. Items that have fallen through time, anachronisms that can poison a timeline and forgeries sent back in time to change the record all fall under her purview. Mostly they’re inanimate objects, a helmet here, a phonograph there. And Teddy’s good at her job. She’s a good recovery artist and she crosses the timestreams to do it — until someone lobs a T. Rex at her! Narrowly escaping and suppressing the out-of-time terrible lizard, Teddy begins to wonder how an organic anomaly developed. Soon after, Teddy comes face to face with another temporal anomaly – this time in the guise of a beautiful woman with orange skin and red hair — a woman ripped right from Teddy’s dreams. Instead of suppressing this anomaly, Teddy runs away with her to a slice of time all her own. However, Teddy’s handler is not so keen on this new relationship and sends a rival team of suppressors to capture Teddy and her new love. A story of relationships, time and acceptance accompanied by fantastic dreamscapes, flow chart sequences and an electric color palette.

Universe!: The Periodical of Cosmic Wonder by Albert Monteys

An anthology series, Universe! tells a different story each issue, but set in ostensibly the same universe. Readers will from time to time catch a subtle reference to a previous event from issues to issue, but each story tells a self-contained tale of science fiction. From time travel to contacting alien life to relationships with artificial intelligence, in just three issues Universe! has covered a lot of ground. Monteys’ art is the cartooniest on the list, but in many ways that actually helps the stories along. From lumbering companion robots to humanoid-shaped space ships, Monteys captures the imagination, borrowing from both traditional sci-fi, Jack Kirby and a style all his own. Each story is punctuated with humor and silliness, but each also has a moral heart. We cover a lot of ground, like the failure to communicate or the concept of a corporation traveling back in time solely to copyright every atom in existence. It’s a smart series that fits with the best aspects of Doctor Who.

Part time travel story, part superhero story, Rocket Girl introduces readers to Dayoung Johansson a teen cop from the year 2013. Only, her 2013 doesn’t resemble our 2013. There are jetpacks, flying cars, holographic dataslates, and most differently a teen police force. See, the world was changed by one single corporation in 1986. They own everything, even the police. And people couldn’t trust adults to be police anymore so teenagers took over the role. Seven years on the force, retirement and then a cushy job with the corporation. Only, Dayoung feels like there’s something wrong about this. An informant tips her off that things could be different and she discovers the corporation has been planning to send something back in time to ensure history completes itself. Dayoung gets the jump on them and travels back to 1986, to make sure her future never comes to pass. In the “present” of 1986, Dayoung buddies up with aspiring scientists who just built a time machine only for a teen cop to show up in the middle of it. Combining aspects of a police drama, rocket powered chases and the chance to do it all over again, Rocket Girl gives us a determined 15-year-old cop who just wants to do good. Wonderfully illustrated by Amy Reeder, we get a great window into 1980s New York City contrasted with the could-have-been “future” 2013 New York. Each issue ends with a single page split down the middle showing the action in both eras.

Planetary vol. 1: All Over the World and Other Stories by Warren Ellis, John Cassaday & Laura (DePuy) Martin

Billed as Archaeologists of the Impossible, Planetary are a trio of adventurers who are trying to piece together the secret history of the 20th century. The things no one knows about or talks about, the secret battles to save mankind from invading mutliversal heroes or the millions of years old spaceship that languished under an office building. This first volume introduces readers to Jakita Wagner, the tough as nails, super strong leader of the Planetary team; The Drummer, a technological and information savant who may or may not be sane; and Elijah Snow, a mysterious figure who is 100 years old and can subtract heat from any environment. Together, they travel the world solving age-old mysteries, from a Monster Island north of Japan, to a ghost cop out for vengeance in China. Readers will especially pick up on more than a few similarities between the world weary and snarky Elijah Snow and Peter Capaldi’s punk academic Twelfth Doctor. Billed as a deconstruction or flipping-on-its-head of the superhero genre, fans will notice homages to various popular characters throughout the book, as Ellis plays with the concepts and aligns them into a coherent secret history. Cassaday’s nearly photo-realistic pencils and Laura Martin’s smart color choices make for a true-to-life experience. The characters stand out as real, and you feel like you’re experiencing the fantastic leaking into our world. Fans of Doctor Who may also note a feeling throughout the book of the UNIT days of the Third Doctor, when the Doctor worked as a scientific advisor holding back some of his knowledge to ensure it wasn’t misused.

The punk academic himself.