Joining a book club can be a fantastic way to socialize with other book lovers while also discovering some amazing new books. But what do you do when you can’t make an in-person book club work, either because no one near you wants to read what you want to read or your pals are spread out around the world? You set up an online book club, of course!

My own online book club

My adventures with online book clubs started a couple of months ago when I was sitting in Reagan National Airport in Washington, DC, waiting for my delayed flight. Bored, I started texting a fellow non-binary friend about how I wished we had our own space to talk about things. One of us then came up with the idea of a book club, and within minutes, we had a name (Enby Comics Club), a twitter account (@enbycomics), and a few fellow non-binary folks who wanted in on ground floor.

But setting up an online book club is easier said than done. There are a lot of choices to be made, and people often have their own ideas. Figuring out how things are going to work upfront will save you some potential trouble down the line.

Who Is the Decider?

The first big question, even before you get to issues like hosting, is figuring out how decisions are going to be made. Is this book club going to be your baby, will there be a core group that makes the decisions, will it be fully democratic, or will you try to work on consensus? Each has its benefits and detriments, and can make for a very different experience.

Voting on everything might make sense up front, but be prepared for democracy in your online book club to be just as messy as in real life. Voting on what books to read, for instance, can leave some members feeling perpetually left out (as their proposals are always voted down) or your reading list too uniform. If you want to make sure your book club reads diversely, democracy might not be the way to go. (That said, you could set strict rules to ensure that every third book with be an author of color, 25% of titles will be nonfiction, etc.)

Consensus also has its limits. There will pretty much always be at least one person who wants to do something else, and insisting on consensus can either create conflict or put them in a place where they have to constantly compromise. Just because someone doesn’t speak up doesn’t mean that they don’t have a problem, especially if it’s something they don’t feel 100% comfortable raising, like the lack of diversity in authors or the fact that the group keeps picking expensive books.

Let’s be real, though: this is the internet we’re talking about, and unless you know practically everyone in your online book club pretty well, consensus probably won’t work, and everything will go down in a flame war of epic proportions. But, if you have a tight-knit group with similar interests that already knows each other (your old college pals, for instance), then consensus can work great.

The Enby Comics Club never formally established any rules, but we effectively work on a hybrid anarchy/oligarchy model. If someone wants to do something, like set up a new channel on our Slack (which I’ll get to in a minute), they can. But, for major stuff, like picking our next book, we have a key group of people—basically the original 3-4 members—who survey the group and then make a final decision. That way we can be sure to mix up what we’re reading, bring in a variety of formats and publishers, etc.

Ultimately, you just have to know your members and know what works for them. Just keep in mind that the old standby of in-person book clubs—letting each member pick a book in turn—might not work well for larger online book clubs.

Where (and When) Do We Meet?

Next, you need to figure out how your online book club is actually going to “meet,” since you can’t just crash in your local Starbucks. Fortunately, there are lots of great options, which can create very different experiences.

Do you want to replicate the in-person book club experience as closely as possible? Then maybe consider setting up a Google Hangout. You can see video of everyone, and there are options for muting so not everyone is talking over each other. The downside? You’ll have to settle on a time that’s good for everyone, and you’ll need to save your brilliant insights for those official discussion times.

You could instead create a forum-type discussion by setting up a Facebook or goodreads group. Members can pop in with their thoughts as they have them, multiple threads talking about different themes or characters can go on at once, and everyone can participate regardless of where they are. The downside? The discussion can feel a bit less focused, so you might still want to go ahead and schedule a chat at the end of the month to flesh out final thoughts and get some closure before moving on to the next book. 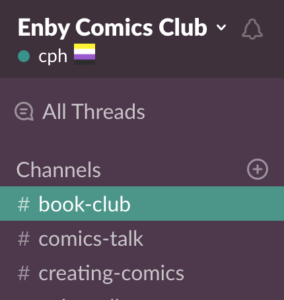 Another option: set up a Slack forum for your online book club. This is what we did for the Enby Comics Club, and it’s been spectacular. We have about ten discussions channels, only two of which are actually for the book club. The rest are just for our members to discuss whatever they want in a safe space. We now have a vibrant (if small) community of members who are actively engaged in a way I never expected. But, while Slack is pretty easy to use and to learn, you might find some members don’t want to deal with yet another social media platform. If you and your book club pals are already using Slack for work (or because you’re Epic-level Book Riot Insiders), then it’s a great option; if your book club includes your elderly grandmother who is barely aware of The Facebook, it might not be so great.

How Big Should Your Book Club Be?

You might be tempted to go all-out and try to get everyone ever into your online book club. This is probably not a fantastic idea. First off, the logistical nightmare alone make it just not worth it unless your name rhymes with Bophrah and you have staff who can handle everything for you. Also, a huge book club means huge potential for conflict. Larger book clubs can work, but they require a lot more work.

But wanting to keep things small-ish doesn’t mean you have to be private, per se. For the Enby Comics Club, we did a bit of promotion on twitter, getting a few people with large follower counts to retweet our initial announcement, so that we could get members outside of our immediate circle. And while we did get a lot of new members, because our focus is so small—we’re an online book club for non-binary folks to talk about comics—it was still manageable. That same approach might not work for other book clubs.

That should hopefully be enough to get your online book club started. After that, you’re kinda on your own, though Book Riot is always here with some great recommendations if you’re ever looking for the next book for your club to read.