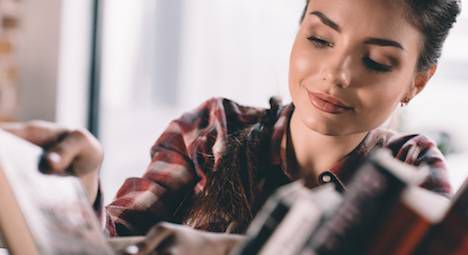 Public libraries are often considered open, accessible, and free. Places where you can go to borrow books, access the internet, attend storytimes and author events. You can research, relax, study, or just hang out for a few hours. Libraries can be places of social activism and where diversity and new ideas are promoted. We write about all of these aspects of libraries on Book Riot fairly frequently, and if you are a regular (or even irregular) library user, none of what I have just written will be new to you.

In this post, I want to try something a little different, and look at the library through a different lens: that of a geographer. Although the digital resources of libraries are increasingly important, and there are even libraries that have no physical books on shelves and are all about the digital, physicality matters. Space matters. Libraries are physical buildings that are situated in cities and neighbourhoods, places to walk in, sit in, be in. There are a few different ways that we can think about libraries as space.

The public library as an ordered space.

Libraries are open and free, and they are great examples of public spaces. But they are regulated public spaces. You are not free to do whatever you want, whenever you want. There are opening and closing times, codes of conduct, and surveillance in various forms once you enter. People are ordered; behaviour is regulated.

Space is ordered in the library. Most public libraries are divided up into different areas, ‘libraries within a library’. There are children’s libraries, teen/youth areas, reference sections, study spaces, magazine/newspaper areas. Typically, there is a pattern to how these different areas are arranged, with the higher traffic or higher sound level areas kept far away from the more silent and studious spaces (you generally don’t see a children’s library adjacent to a formal reading room, for example).

Perhaps most obviously, books are ordered. In fiction, they can be separated out by genre, or just by author’s last name. In non-fiction, subjects can be pulled out (such as gardening, cooking, and DIY), or they can be shelved entirely by the library’s classification system of choice (usually Dewey or LOC). Each of these ways of shelving and ordering have consequences for the way people browse and discover. Some librarians think that alphabetical shelving encourages more serendipitous discovery than genre shelving, and allows people to spot books they may never have otherwise picked up.

One of the more interesting components of the definition of a library that I found when I first started researching libraries was that a library is not just a collection of books: it is a collection of books ordered in such a way that the items can be found. The way books are arranged speak to issues of power, knowledge, and access—important topics to consider when we think about what the public library is and for whom it serves.

The public library as a community space.

There is often talk about libraries as community spaces and social hubs, places where social capital can be generated and people can go to feel ‘part of the community’. I’m not denying any of this, and it is true that the community aspect is more important now than ever. But I would suggest that there is another way to think of the library as a community space, and that is to think of the library as a visible arm of the municipal authority.

In Australia, where I did my research, public libraries are funded by the state (there is some federal and state funding, but they are largely funded by local governments). They are part of the local council, the library staff members are council employees, and higher-up management-level decisions in the library need to go through the council.

Most, if not all, councils have strategic plans that involve encouraging the residents of their constituency to be active and engaged citizens, and to build strong social relationships. Councils also often aim to connect with their constituency, with open communication channels and dialogue.

The library is an excellent way for councils to connect with their residents, and a place where people can attend events, get information from the community noticeboards, and interact with a visible part of the council. As one librarian put it, the library is a feel-good story for the council—an author event at the library is a much happier story that generates goodwill than a story about rates increasing, again.

The library as a reading space.

Despite the talk about libraries as being more than just about books, books are still a fairly large component of what a public library is, and one of the main resources they have. The part of this that I find interesting is this question of taste: who reads what, to whom does the library cater, and what role do librarians play in shaping our tastes and reading lists? What role should they play?

When Fifty Shades of Grey came out, it was a massive bestseller (and even that is probably understating it). Libraries could not keep up with the demand and number of holds the book was generating, and were buying the book by the dozens. Fifty Shades of Grey may be a page-turner, and no doubt a commercial success, but it is not exactly an example of high literature.

Is the role of the library to stock the bestsellers because that is what people want to read, and the purpose of the library is to serve its community? Or should it be stocking ‘proper’ literature and encouraging its users to expand their reading horizons and reading books that exercise the mind? These are questions that have been around since the earliest public libraries, and the ‘great fiction debate’ has been around since the nineteenth century. These are also the questions that are considered when it comes to shaping a collection, and what librarians might be thinking when they decide which books to buy for their libraries.

Public libraries are complex institutions, situated at the intersection of civic and commercial forces. Despite what some of their detractors may think, they are far more than free bookshops. They are wonderful places of knowledge and ideas, with a tremendously long history, and a lot of thought that goes into their creation. Long live libraries!