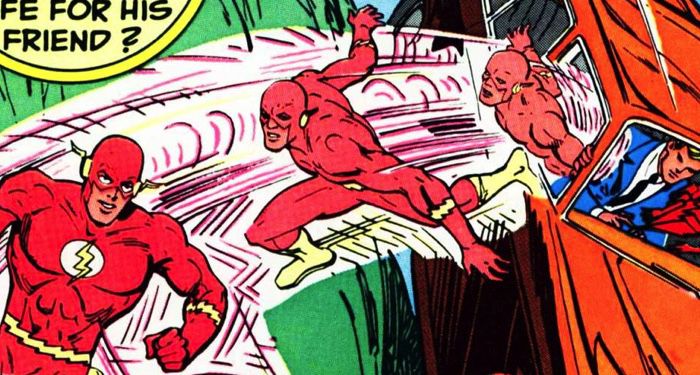 In a world of angsty Bats and convoluted Hawks and galaxy-spanning Lanterns, the Flashes can seem like one of the more straightforward franchises the DCU has. After all, they’re just a passel of nice midwestern boys who run fast, right? How complicated could their family tree really be? How many secrets could it hide?

The answer? Several, all of them quite juicy, and most of them oddly forgotten by continuity. But today I’m here to expose some of the weirder oddities in the West-Allen lineage. Sorry, fellas.

As fans of the CW show are well aware, Barry Allen’s mother was murdered when he was a child, and his father was wrongly convicted of the crime. According to the continuity established by the 2011 New 52 reboot, Barry was taken in by family friend Darryl Frye, a police officer who eventually rose to the rank of captain. Barry grew up to be a forensics investigator for the Central City PD, making his Darryl his boss as well as his foster father and beloved mentor. Their relationship is solid and quite lovely.

However, Darryl has a secret: the reason he took Barry in as a child was because he was in love with Barry’s mother, Nora. In fact, Darryl and Nora had had a brief affair, leading Barry’s then-girlfriend Patty — and the reader — to suspect for a while that Darryl might be Barry’s biological father. Darryl eventually clarifies that he is not — the wrongly incarcerated Henry Allen is definitely Barry’s bio dad — but I so wish that weren’t the case, because I remember Bronze Age Darryl.

See, Darryl wasn’t created for the New 52. Darryl first debuted way back in The Flash #285 (May 1980) as Barry’s new boss, a cranky micromanager…and incongruously, as he eventually confides to Barry, the would-be superhero Captain Invincible!

Captain Invincible (sometimes called Captain Incredible) served as the book’s comic relief, or would have if he was actually funny. He’s a buffoon in an ill-fitting costume who insists on helping the Flash fight crime despite the fact that he has a heart condition and no superpowers (except for how sometimes he does, which is never satisfactorily explained). Barry spends a lot of time trying to convince his boss that actually he’s pretty sure the Flash doesn’t need his help, when actually he should probably be having a quiet but concerned conversation with HR. That’s the early ’80s for you, I guess!

Now, this version of Darryl far predates the retcon of Barry’s mother being murdered — there are several reboots between Captain Invincible and Darryl as Barry’s foster father. So even if Darryl had turned out to be Barry’s real dad, it would have been the, you know, sane version of him. But let me have my fun, okay?

2. Barry has a long-lost evil twin.

Barry’s greatest enemy has long been Professor Zoom, AKA the Reverse Flash, AKA Eobard Thawne, a time traveller from the 25th century. What Barry doesn’t know, though, is that they’re related.

According to Flash #144 (January 1999), Barry was actually a twin. The night he and his brother were delivered by the local doctor, another couple showed up with the woman in labor — the Thawnes. The Thawne baby didn’t make it, and the doctor, exercising extremely poor (read: he was drunk) judgment, offered them one of the Allen twins on the DL. They accepted, and the Allens went away believing one of their twins had been stillborn, and naming the other Barry.

The other baby, who was named Malcolm Thawne, definitely got the short end of the stick — the Thawnes were petty criminals, con artists, and abusive. Eventually he learned the truth about his parentage and was furious that his twin had gotten what he believed was an idyllic life, complete with superpowers (this was long before the “Barry’s mom was murdered when he was a kid” retcon, so Barry really did have a charmed life at this point). Malcolm decided to use the Thawne family’s hereditary power over a mystical blue flame (…sure) to become the supervillain Cobalt Blue and attacked the Flash and Kid Flash…once, before being swallowed up in his own flame. Whoops.

Barry never knew that Cobalt Blue was his brother, but Wally learned when Malcolm returned years later. Not only that, but Malcolm was apparently the spark (zing!) for a thousand years of enmity between the West-Allens and the Thawnes, with generation after generation of Flashes battling various Cobalt Blues. Actually, the weird thing is that the Reverse Flash isn’t a Cobalt Blue, and doesn’t seem to know anything about any of this, given what an Annie Bates–level Barry Allen fan he is.

The Allen/Thawne rivalry finally ended in the late 30th/early 31st century when Barry’s son Don, who had been born in the future, fell in love with and married Meloni Thawne, the umpteenth descendent of Malcolm. Which, yes, does mean that their son Bart Allen (AKA Impulse, AKA Kid Flash, AKA Flash IV) is technically the product of incest, though so many generations removed on Meloni’s side that it’s basically fine. Still, it’s a little Flashes in the Attic-y.

And that’s not Meloni’s only secret…

3. Bart Allen also has a secret brother. Well, had.

In the infamous 2004 whodunnit Identity Crisis, Flash villain and perpetual loser Captain Boomerang, AKA Digger Harkness, is revealed to have a son, Owen Mercer. Despite Digger’s abandonment, twentysomething Owen is happy to meet him when Digger reaches out, and the two of them briefly bond, until Digger is killed on a job.

The Flash Rogues take Owen under their wing, and he agrees to become the new Captain Boomerang and do super-crime because I guess he didn’t have a hobby or anything. They are shocked to discover that Owen has super speed…but only when he’s throwing boomerangs. This, of course, makes complete and total sense, and I can’t believe you would suggest otherwise. Rude.

So who is Owen’s real mom? It’s eventually revealed (to the reader, but not to Owen) that at some point Digger was lost in the 30th century and had a tryst with…Meloni Thawne! This, of course, raises a number of questions, such as: How did Digger get back? How did Owen end up in the present? Which brother is older, Bart or Owen? How did Owen inherit super speed, when Bart got it from his dad’s side and Eobard Thawne’s super speed has never been depicted as hereditary? Why is it limited to boomerang throwing? And most bafflingly, why would Meloni slum it with a greasy weasel like Digger Harkness when she could have hunky Don Allen?

Good news! None of those questions are ever answered! Instead, Owen spent a few short years as a sexy, brooding antihero, bouncing between the Rogues and the Outsiders as his moral compass flip-flopped. His career ended ignominiously when Digger came back as a zombie during the Blackest Night event. Owen captured his father and kept him in a pit, feeding him living people in the hopes of eventually finding a cure, which was deeply out of character for a reasonably decent guy who’d known his father for like, three days. When Captain Cold discovered how far Owen had fallen, he pushed Owen into the pit, where…well…Digger ate him.

Digger, of course, was properly resurrected at the end of Blackest Night. Because why would you want a hot antihero with superpowers who’s related to one of your heroes when you could have a jerk with a poorly rendered Australian accent? It’s unclear if he has any idea what happened to Owen, because he literally never thought about him ever again. Bart and Owen never met or learned that they were related. It’s a real sad kazoo of an ending for old Owen, friends.

We’ve only scratched the surface of the Flash Family’s weirdness (they have a pair of first cousins both named Wallace Rudolph West! Barry’s real name is Barrence!) but stressing out speedsters too much tends to cause a Crisis event, so I’ll leave it at that. Stay tuned for more tea-spilling on the ridiculous family trees of superheroes — trust me, there’s plenty more where that came from.

Oh hey, remember when the Flash first discovered the multiverse?