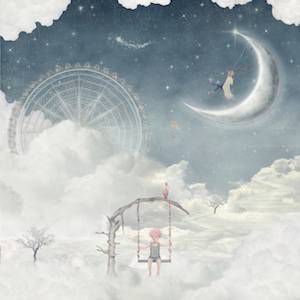 My grandfather was an expert story teller. He was good at reading aloud and made arrangements with his voice for each character, but I’m not taking about reading aloud, I’m talking about an even older art.  The art and magic of conjuring a story on the fly, Scheherazade-like.

The tale would unspool thorough swashbuckling adventures — the robbers were pirates, I had just finished reading Treasure Island and my grandfather knew his audience — and he would pick the thread up night after night, without missing a beat, though there were side plots and a cast of thousands. He even stitched in an unlikely heroine, a little girl, about my age, who piloted her own vessel, a teacup called Seapup.

My father, too, can tell a story. Right out of thin air when I was little he spun Samantha Eve and The Nudnicks, a morality tale of a family, incidentally much like my own, but who were knuckleheads, forever bumbling, taking wrong turns, and making bad choices.

He also told The Amazonian Glowfish. It was about a neon tetra that escaped the gulag-ish confines of my aquarium and into the toilet, and from the plumbing underneath the Pittsburgh of my youth to the Amazon River, where it grew to unusual size and befriended an Amazonian River dolphin.

I, however, lost the ball. I can’t tell a tale worth a darn. My kids ask me all the time for a Good Night Story and I stammer and start, lose my place, forget critical main character names that I had named only seconds before.

I briefly had a grip on Princess Cat Island, a misty place, perhaps Portland, where my seven-year-old daughter’s favorite orange cat named Marmalade held court, and, before it fell apart under its own weight, I told Planet of the Bichons to my son, 9, about an intergalactic explorer who was also a house pet. I realized things had reached an unseemly end when I overheard my son telling his friend that I told a bedtime story about butt-sniffing astronauts. It wasn’t only about that, I assure you.

I can only go up from here as a storyteller, no? I want to tell a tale around the fall bonfire and begin, “Once upon a time” and spool it out, not go, dang it, what was I saying about the bichon? I want to get better. So point me in the right direction. How have you gotten better as a storyteller? Who do you aspire to be? Who’s who in modern American tale-spinning? Recommend anyone on YouTube?