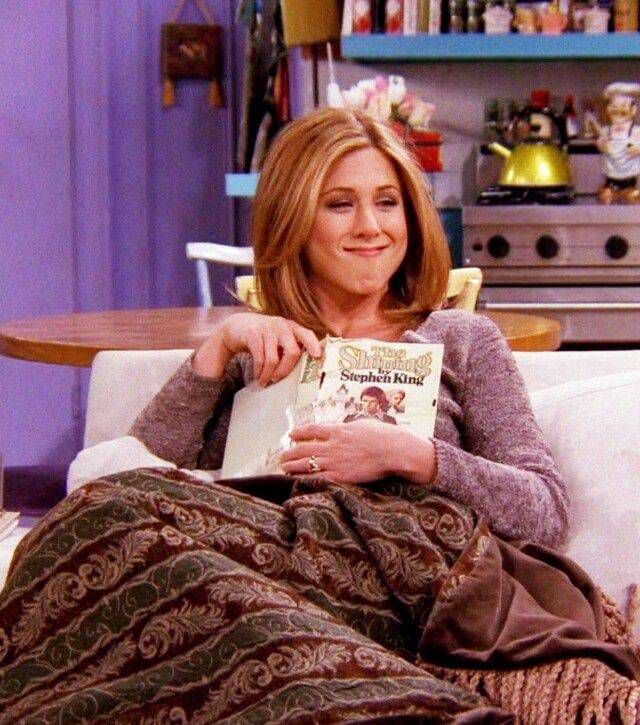 Having never been a cool girl myself, that lie did not affect me personally: I took “bookworm” as a compliment, and I was fine seeing my elementary school crush play basketball during lunch break from the window of the library. But now I wonder: were there gaggles of cool girls around me who secretly shared my love of books, but felt they had to hide it?

In the name of people of all stripes embracing their reader sides, I’d like to expose one secret reader–a familiar, albeit fictional, “Friend“. We probably think of her, first, as the girl who ran out on her wedding, who won Ross Geller’s heart, and who knows that “on a break” is not a free pass, but, can I say, y’all?: Rachel Green is also a serious secret reader.

– “The One At the Beach”. Between the impish steps of her let’s-render-her-bald scheming, Rachel spends some time at the beach house reading. This is not atypical beach behavior, even for a cool girl–until you see what she’s reading. The title? Joan Didion’s The Last Thing He Wanted. This is not reading-lite: Didion’s prose is sparsely gorgeous, but it’s a challenge, and her subject matter tends to be pretty tough. My respect for Rachel went up exponentially after this episode; even I, unapologetic reader that I am, beach-cheat with old favorites and cheesy paperbacks. here Monica and Richard Are Just Friends”. While I think Joey is the reader-star of this episode–putting a scary book in the freezer just to escape it is so ridiculously adorable–Rachel reveals, in the course of a book exchange, that she re-reads Little Women. 23% of Americans read zero books last year–major buzzkill–so re-reading a classic is, in and of itself, an activity that deserves props.

– “The One With Rachel’s Book”. Kinda gives it away up front. Here we find that there are levels to Rachel’s secret-reading, when Joey finds a little smut under her pillow. (Wholly hypothetically, where else would you keep your Anais Nin?) Chimney sweeps and vicars, oh my. And, God love her, she’s unwilling to apologize for her erotica, despite the loads of teasing heaped on her as a result.

– “The One After Vegas”–or, the one where we learn that Rachel’s also hiding secret literary aspirations. Midway through her rehearsed “we definitely need an annulment” speech to Ross, she edits to add, “I’m saving that thought for my children’s book.” A children’s book on bullying from Rachel Green? I’m intrigued.

Rachel’s depth sneaks out at unexpected moments during the show’s 10 seasons, though she’s mostly still relegated to the cool girl role. Maybe she’s the ultimate personification of “you can’t judge a book by its cover”.

You can’t expect people–even television people!–to be just one thing. We may care about fashion and still be readers. We may work as baristas, be sometimes shallow, act impulsively, have inappropriate crushes: no such decisions tar us in the reading world. Ross is super wrong when he dubs Rachel “just a waitress”–she, like all readers, secret or brazen, is so much more.