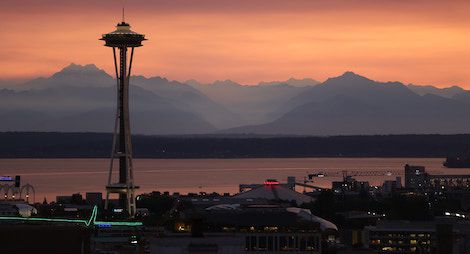 When you think of Seattle, you probably think of Pike Place Market and Starbucks, maybe Amazon and Microsoft if you’re into tech (or billionaires). But you may not know that after getting caffeinated and while avoiding Pike Place, Seattlites are rabid sports fans in a bookish city. I know, I know reading and sports aren’t unusual pass times but Seattle goes full-bore for these two hobbies.

Basically Seattle is a great place for readers and sports fans. And what happens when they get combined? Seattle sports romances. I mean, that’s one thing that can happen.

I stumbled into this corner of Romancelandia and was intrigued to find Seattle so well-represented in sports romance. Sadly, I didn’t find a lot of authors of color writing Seattle sports romances. If you’ve got any, send ’em my way!

Published in 1998, this sports romance centers around an imaginary Seattle hockey team, named from a Salish-speaking Native American community who traditionally lived along the Columbia River. (. . .)  The earlier books in the series may not have aged well (see above choice for Native American-inspired mascot), but the series spans 12 years of publishing. 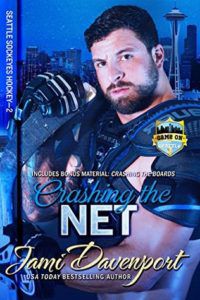 Apparently fake Seattle hockey teams get salmon-related mascots.  (Chinook and sockeye are both local kinds of salmon.)  This eight book series includes a few novellas all focused around the players of the imaginary Seattle Sockeyes hockey team. The series starts with Skating on Thin Ice, about the establishment of an NHL team in Seattle. If you want to cut straight to hockey playing, go with Crashing the Net. Heck yeah that’s the Space Needle behind him!

Davenport is a self-professed life-long sports fan, and proud Puget Sound resident. This first of her Seattle football romance series. In the first book, Fourth and Goal, Seattle Lumberjacks professional player, Derek is struggling on the field until he finds some engaging activities off the field with old flame, Rachel.

Play With Me in Seattle by Kristen Proby

This one is actually a lone sports romance in a series of Seattle-set romances.  He is a professional football player for an unnamed Seattle team, she’s his sister rocker friend and isn’t into jocks. Usually that is. 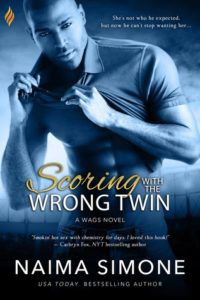 WAGS, or “wives and girlfriends” refers to the partners of professional athletes, by way of the British media. Scoring with the Wrong Twin starts the series with a Puerto Rican computer programmer impersonates her supermodel twin sister as a favor, where she meets the Washington Warriors tight end. (Ahem.) Romancing ensues.

Did you know that fish are a big deal in Seattle? Yes, this is the third fake Seattle team with a fish mascot. This is also Davenport’s second Seattle football sports romance. The first book, Snap Decision, has a bad boy, the girl next door, and a remote PNW island. However, Game Changer, where the Steelheads tight end (. . .) gets entangled with a horse breeder finally gives us a sportswoman! Also of note, the cover model for Blindsided, book two, has chest hair! 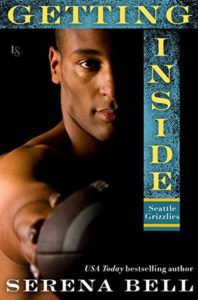 This is a standalone, so far, about the Seattle Grizzlies team getting a new coach, a woman! She’s caught balancing her professionalism with her attraction to one of the linebackers.

Men of Tyee by Jami Davenport

Shifting towards the new adult arena, this third Davenport football series follows college football players at the imaginary Tyee University. The first book is the second chance romance with Riley and Tiff, who had been an item in high school. Sacked in Seattle might be my favorite title today.

First things first, “skookum” comes from Chinook jargon, meaning “strong” or “monstrous.” See, it all comes full circle. Zeke Wolfe, brother to leads from the Steelheads and Sockeyes series, suddenly finds himself with a fake fiancé and three children. Hijinks and romance commence.

When I stumbled on the little pocket of Seattle-based sports romance, it was a fun rabbit hole to explore. However, at the end I’m left with a laundry list of wants from future Seattle-set sports romance. If you’ve come across any books that fit these criteria, please share!

If you’re looking for more spo-ro (not a thing) books try:

50 Must Read Gay Romance Novels, 100 Must-Read Sports Romances, 5 Figure Skating Romances for Your 2018 Olympics, and 8 Baseball Romances to Check Out.