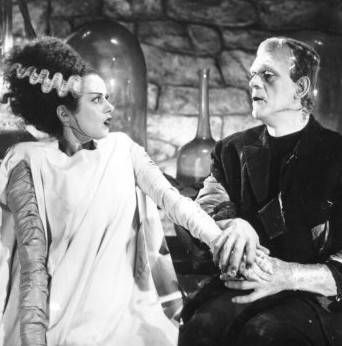 The trailer for Victor Frankenstein starring James McAvoy and Daniel Radcliffe dropped early last week to distinctly mixed reactions, especially in book-loving circles. Some bemoaned yet another film that trades on the name of Mary Shelley’s famous novel but has little more in common with its source material than that. Others – like me – cheered at the prospect of a gleefully silly, irreverent-looking film with leads straight out of tumblr general casting. If the trailer is anything to go by, I’ll probably love Victor Frankenstein, a monster mash-up of buddy comedy, dumb action, and creature feature, all wrapped in a Victorian cravat.

I think even if you wanted to insist on textual fidelity as a general principle, in this particular case we’re already too far gone. For every pedantic correction you offer – “Actually, it’s Frankenstein’s monster. Frankenstein was the scientist!” – there are a hundred lurid green “Frankenstein” Halloween candy buckets, masks, or tchotchkes lining the shelves at the Dollar Store come mid-September. That ship, in other words, has sailed, with Boris Karloff as its captain and Peter Boyle its first mate. Victor Frankenstein and the legions of films like it, cannot and will not be stopped.

But that doesn’t mean there isn’t also room for a truly faithful cinematic adaptation of Shelley’s novel as well. The closest we’ve come is Kenneth Branagh’s Mary Shelley’s Frankenstein (1994) and that is still a bit of a mess, as if Branagh wanted to keep both the plot of the novel and the horror sensibility of some its looser film iterations. We’re more than due for a truly faithful adaptation, especially now that our collective cultural obsession with innovation and “playing god” via the creation of artificial intelligence, has seemingly reached a fever pitch.

At one hundred and ninety-eight years old, Shelley’s novel is still one of the more sophisticated examinations of artificial intelligence to ever capture and keep the popular imagination. But more importantly, at its best Frankenstein is a rumination on the way we create our own monsters by denying that they are men.

Cinematic fascination with artificial intelligence is hardly new: Metropolis, 2001: A Space Odyssey, Blade Runner and Terminator, among others, have been mining A.I. anxieties for decades. But a more far-reaching and intense obsession seems to have building over the last couple of years with the release of Prometheus, Her, Chappie, The Machine, and, within weeks of each other this spring, Ex Machina and The Avengers: Age of Ultron. Looking beyond the big screen, even real science superstars are getting worried: just a few weeks ago, Bill Gates, Elon Musk and Stephen Hawking warned of the potential dangers of artificial intelligence.

Of all these recent cinematic A.I. musings, Age of Ultron comes closest to replicating (however briefly, in its first act) the plot of Frankenstein: mad scientist(s) create intelligent being that learns about the cruelties and hypocrisies of humanity, and vows bloody revenge.

By virtue of the type of film it is, Age of Ultron chooses to focus more on the rage of the machine, rather than what he’s raging against. It’s befitting a blockbuster superhero story but it does make for a slightly less satisfying villain and a toothless storyline. For all his passionate monologuing, we don’t get a sense of Ultron’s interiority at the moment it is most interesting: when he is learning about us. He pivots from the moment of creation to genocidal anger so quickly and so violently that the viewer – and indeed, his creators – never really have the opportunity to feel complicit in that anger.

What makes Shelley’s novel so challenging and so relevant still, is that, without flinching from her creature’s horrifying actions, Shelley insists that her readers identify with him, or at least understand him. We see his anger burn not in a flash but by degrees, as he is abandoned by his father figure, cast out by the family he adopts, rejected even by a child and denied the possibility of companionship with one of his own kind. Through the creature’s reported first-person narrative, we are forced to bear witness to the isolation, yearning, betrayal, and rejection he experiences. Shelley draws parallels between the creature and fully-human Victor but we watch as the creature is denied his subjectivity – his humanity. This we see too often and too painfully in real life. The easiest way to elide responsibility for what you’ve done to someone is to deny that they are even human.

Shelley’s novel makes the parameters of “artificial” hard to define and enforce. The common dismissal of A.I. by characters on screen is that these are not people, they’re machines (think Battlestar Galactica’s “toaster” pejorative); they’re not flesh and blood, they’re wire and synapse. But what about when they’re not? Who needs a Turing test when what you’re testing isn’t any more machine than you are?

We’re ripe for an adaptation of Shelley’s novel that is willing to be short on the how and why of the monster’s creation – “because I can; because I have experienced loss” and “science!” aren’t what’s original about this story – and long on his character development and complicated relationship with his creator. A film that is faithful not only to the plot but to the philosophical, probing tone of the book; something more like the slow, stylish Ex Machina, but with the creature’s perspective as the meat of the film, not a well-executed twist. A truly faithful adaptation of Frankenstein would be a hard look he ways we create, define and deny humanity.

The question that so many cinematic representations of A.I. grapple with is essentially “What if we create life and then it turns around and hurts us?” What makes Frankenstein so important is that it asks “What if we create life and then we turn around and hurt it?” The former might be answered by firearms, explosives, or superheroes, but the latter demands something harder and more humane.