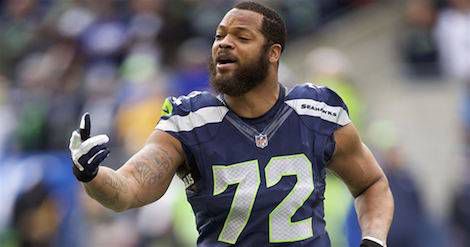 Haymarket Books will publish a book by Seattle Seahawks’ defensive end Michael Bennett next year, according to Publishers Weekly. The book, titled Things That Make White People Uncomfortable, is slated to come out in April of 2018. The news was confirmed on Twitter this week by Bennett’s co-author, Dave Zirin of The Nation. Per Zirin, the book will focus on Bennett’s thoughts on “the NFL, racism, sexism, intersectionality and athletes no longer being silenced.”

It’s no surprise that Bennett, who was part of the Seahawks’ Superbowl XLVIII Championship team, would highlight social issues in his memoir. Although it seems the title is meant to be at least partially comedic, he’s been actively engaged in social and political issues in a way that isn’t always common for professional athletes.

Bennett is an outspoken advocate of the Black Live Matter movement, he condemned some of the comments about women that surfaced from Donald Trump during the 2016 Presidential election, and he’s spoken out in support of former San Francisco quarterback Colin Kaepernick, who was criticized (and is still job-searching) after continually taking a knee during the national anthem throughout the 2016 NFL season.

One of Bennett’s most recent efforts goes beyond raising awareness: the two-time Pro-Bowler has committed to donating all of the money he raises from endorsements in 2017 to charities that focus on helping minority communities and empowering women of color. He’s also sponsoring a fundraiser this Saturday for Charleena Lyles, a black woman who was shot and killed by Seattle police in June.

The U.S. political and professional sports landscapes are both very different than they were in 1990 when Michael Jordan avoided speaking out against NC Senator Jesse Helms despite Helms’ record of racism. (Jordan’s hesitation has long been reported as being because, “Republicans buy sneakers too,” though there is some doubt as to whether he spoke those exact words.) That doesn’t mean Bennett won’t face any pushback, but his co-author is cautiously optimistic that even hesitant readers can be convinced to give the book a chance.

In HS, we read, Kipling, Othello, Huck Finn, Heart of Darkness… no teacher ever asked, "Is this making any Black students uncomfortable?"

The title – Michael's creation – is meant to be satirical and biting. But if it actually makes one uncomfortable, they should read the book!

As a Seahawks fan, a book fan, and a Bennett fan, I’m already watching for a pre-order link, and I’m guessing I’m not the only one.