I woke up this morning to the meme “This is the future that Liberals want,” thanks to this incredible tweet on my dash:

this is the future that liberals want pic.twitter.com/6671NeUw3y

The point of origin? A far-right (read: super bigoted) tweet complaining about the future liberals wanted. Naturally, people responded, pointing out that diversity and co-existence on public transit is awesome – plus, check out all these other hilarious and awesome things liberals want! Reminds me of the time someone tried to do some good ol’ fearmongering about lesbian farmers taking over red states. Like, how is that offputting at all?

I, as a typical liberal in want of a kickass future, know exactly where to look for cool future things — the world of science fiction. (The recent political shenanigans in America have reminded me more than once of Zaphod Beeblebrox from The Hitchhiker’s Guide to the Galaxy.) While sci-fi could stand to be way more inclusive, there’s definitely a decent chunk of fiction that imagines a lively, diverse future with bonus aliens. This set of books not only portrays the people of the future, but also grapples with questions of injustice and oppression.

So here you go: Ten sci-fi books on the future that liberals (or at least this liberal) wants.

Sci-fi of the YA flavor: 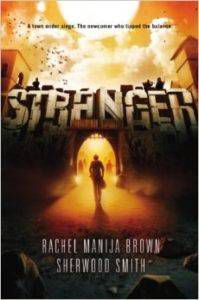 by Rachel Manija Brown and Sherwood Smith – This is a post-apocalyptic take on the classic Western, set in the walled town of Las Anclas. The changing casts of people are different ethnicities and sexualities, and they all have different powers. Some are Changed, while others are Norms, but all must fight to survive in the deadly desert.

Adaptation by Malinda Lo – Humanity meets the mysteries of outer space when the heroine Reese wakes up from her accident somehow different and magically healed. There will be aliens. And science. And foreboding birds.

The Abyss Surrounds Us by Emily Skrutskie – I can’t express how excited I was to just lay eyes on the heroine’s name – Cassandra Leung. (That’s my Asians in Media radar talking.) Cassandra is working to become a full-fledged Reckoner trainer. When her first mission goes awry and she ends up among pirates, well — you get sea monsters, pirates, and ladies in love on the ocean!

Not Your Sidekick by C.B. Lee – Jessica Tran is the daughter of her town’s two top superheroes, and that’s a high bar to meet. While trying to figure out what her superpowers are, or if she even has any, she lands an internship with the local supervillain – and she gets to work right alongside her crush, Abby. (I don’t know if a superpowered future counts as a sci-fi future, but hey, it’s the one I want.)

Binti by Nnedi Okorafor – First of all, look at that cover. Amazing. This novella centers on Binti, the first of her people to gain entry into Oomza University, the best university in the galaxy. She must journey forth for knowledge and for her people…

Dawn by Octavia Butler – This begins in an incredibly classic sci-fi way: Lilith Iyapo awakens in an alien spaceship, having been asleep for centuries. Now she must go back to her home world, Earth, alongside the alien people known as the Oankali. If you haven’t read any Octavia Butler, this is a good place to start.

Ninefox Gambit by Yoon Ha Lee – The disgraced Captain Kel Cheris is given one final chance to redeem herself – she must take control of the Fortress of Scattered Needles, with the help of the undead (!!) tactician Jedao. He’s brilliant, but she may not be able to trust him.

Ancillary Justice by Ann Leckie – I’ve been wanting to read this since forever, but haven’t gotten around to it (but I swear I will). So, here’s the book summary, courtesy of Goodreads: “On a remote, icy planet, the soldier known as Breq is drawing closer to completing her quest. Once, she was the Justice of Toren – a colossal starship with an artificial intelligence linking thousands of soldiers in the service of the Radch, the empire that conquered the galaxy. Now, an act of treachery has ripped it all away, leaving her with one fragile human body, unanswered questions, and a burning desire for vengeance.” 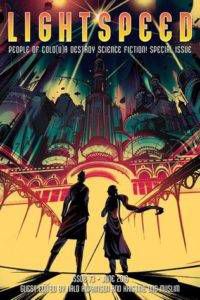 Octavia’s Brood: Science Fiction Stories from Social Justice Movements – I’ve started reading this, but its own summary says it best: “Whenever we envision a world without war, without prisons, without capitalism, we are producing visionary fiction. Organizers and activists envision, and try to create, such worlds all the time. This book brings twenty of them together in the first anthology of short stories to explore the connections between radical speculative fiction and movements for social change.”

In all seriousness, there is a future I want, and it’s one where no one is afraid to face, call out, and strike down systems of oppression. It’s one where queerness is embraced, and words like “immigrant” or “alien” are no longer insults.

Also, I want my own flying greenhouse spaceship. Just sayin’. What sci-fi books portray a future you want, or grapple with problems we face today?