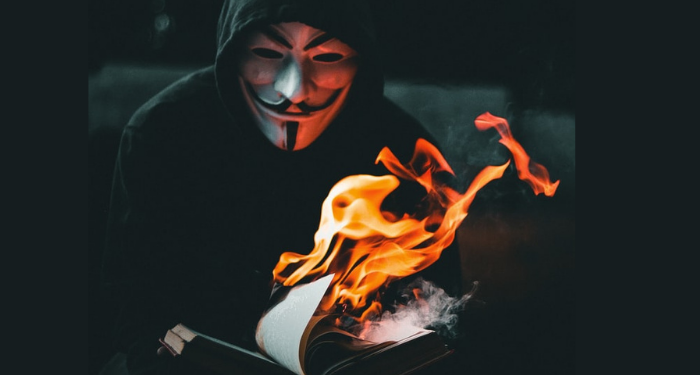 Katey O’Connor is an English Language Arts teacher at Muncie Central High School in Indiana. As part of her unit teaching V for Vendetta by Alan Moore, a graphic novel about standing up to governmental oppression and fascism, O’Connor had a project option for students make posters about current political issues that matter to them. The posters ranged from discussing body image, child labor, racial inequality, and more. Many chose to focus on the Black Lives Matter protests: a timely and relevant topic for today’s teenagers. The posters were displayed outside a O’Connor’s classroom, where a school resource offer (SRO) took issue with them.

At least one student took video of the incident, where three school resource officers and O’Connor appeared to be having a heated debate about the nature of systemic racism in the U.S., though most of the conversation could not be heard. O’Connor had stepped in after hearing officers speaking to the student who made the poster and trying to debunk it, after which the student left. The observing students were uncomfortable with the officer’s criticism of O’Connor, the project, and the students’ messages.

Later, O’Connor was instructed that because of a statement by the attorney general, should would have to bring the posters in from the hallway, which would mean that only her own students would be able to easily view them.

Students organized a protest over the weekend, demonstrating on Monday with signs and chanting “Black Lives Matter.” They asked why only the posters dealing with anti-Black violence had been targeted. Students protested peacefully and had discussions with school administrators as well as school resource officers. Andy Klotz, chief communications officer for the school, acknowledged that the students brought up valid concerns and the school want students to feel heard.

While the protests were peaceful, the school announced that the following day would be e-learning from home. In fact, students were not allowed back in school for three straight days as administrators decided how to continue. A letter sent out to parents and students from MCS Director of Public Education and CEO Lee Ann Kwiatkowski committed to:

The school also said that no further protests would be tolerated at the school, though a protest outside school grounds was arranged with the Muncie Human Rights Commission.

Students are now back in school, and while the SRO responsible for this is not, there are still school resource officers on the site.

It’s hard not see the irony in police attempting to restrict student speech because they’re being compared to a militaristic regime. Police shouldn’t be in schools at all, but they certainly shouldn’t be trying to dictate what students or taught or students’ free speech. V for Vendetta was published four decades ago, but if anything, this incident shows how current these ideas and discussions still are.

O’Connor couldn’t have planned a better way to demonstrate to her class how this dystopian story is relevant to their lives, and it’s a testament to both her teaching and students’ bravery that when they were tested, they wasted no time in protesting the censorship of their speech and their education.

You can read more about this incident from O’Connor directly on Facebook. Protests (outside the school) continue, with a march from the school to city hall taking place today.