School Libraries Matter. Of course they do. However, here in the UK they are in trouble.

In addition, in 2015 over 54% of school libraries surveyed felt that they were underfunded and in 2016 over 1/5 of schools surveyed saw their library budget cut by over 40%.

Even worse, in 2017 the Chartered Institute of Libraries and Information Professionals in the UK (CILIP) stated that England ranks 23 out of 23 OECD  [Organisation for Economic Co-operation and Development] nations for teenage literacy, and is the only OECD nation where the literacy of 16–24 year olds is below that of people aged 55 and over. 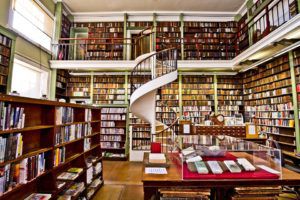 In Nov 2017 Dawn Finch, past president of CILIP wrote a letter to Justine Greening, the Secretary of State for Education here in the UK, demanding the halt of school library closures.

The letter was co-signed by 150 authors and generated a lot of support and debate via Twitter, sparking the hashtag #SchoolLibrariesMatter.

As a school librarian in London, I’m obviously passionate about this topic and jump to defend our profession whenever I can. I recently had a moment that reinforced to me why school libraries matter, even if it was a moment that might seem pretty small to many people.

I was recently speaking to a group of eleven year old students in the library. The majority of them were struggling readers, kids who like to tell me they hate reading. It might be true, but it’s probably because they just haven’t found the right book.

See my previous article on what to do when someone tells you they hate reading.

As the class was coming in, I was handed a box by the receptionist at the school. Inside were six copies of the book “Kick” by Mitch Johnson. I didn’t know anything about the book, really. 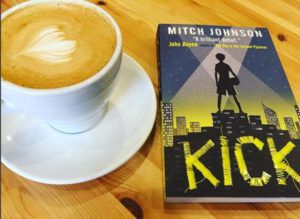 I quickly scanned the blurb on Goodreads as the class was getting settled. The words “football” and “sweatshop” jumped out at me and knew I had a hit. I gathered some more info on it and decided to book talk it to them.

The book, I told them, was about named Budi who works in a sweatshop, We then talked about sweatshops for a minute. I was surprised to find out that they hadn’t really heard of them before. We talked about how they treat people and that we were unfortunately most likely all wearing something made from a sweatshop.

I said Budi eats, sleeps and dreams football. One day Budi kicks the ball through the window of a guy named The Dragon, the most dangerous gangster in the city. Now, Budi owes The Dragon more than he can afford, putting him and his family in danger.

I asked the kids to imagine that for a minute. Every day you get up and instead of going to school you go and make shoes in a place that is only seen in nightmares, and then to make things worse you’ve got the most dangerous man in the city after you. All you want to do is become a football star, but that dream is going away because you’re in a lot of trouble.

I asked the class what they would do in that situation. I got nothing. No response. I was disappointed because I was sure they would connect with that story. I sighed and asked if anyone wanted to borrow it. 10 hands shot up into the air. I was pretty surprised. Then I realised I only had six copies. I tried to give them out to the students whose hands went up the fastest. It was complete guesswork.

Two students got into an argument over the book right away. One didn’t get one and was in tears, he wanted to read it so bad he was crying. The other had the book and wasn’t about to give it up.

I was going to photocopy some pages for him just to tide him over. Then another student who was given a copy put his hand up and said, “We can read it together.” And they did. By the end of their reading time the 7 boys were saying things like “Did you get to page 10 yet?” and “This is THE book!”

This might not seem like much but with that class and those boys it was a really great moment for me to see them engaged in that way. It also speaks to the amount of empathy students have. They have lots of it. Students that age are always getting a bad rap in my opinion and it’s not a fair assessment.

Of course I went out on the weekend and bought another copy for the boy so he didn’t have to wait long for it to come in from a bookseller.

This moment for me was another reason why school libraries matter. It doesn’t matter if it was myself or another librarian putting those books into those boys’ hands. It does matter that they have a properly stocked library with a qualified librarian who can push those books the way all good librarians do.

I hope to have many more moments like that, where we find THE book for that student who needs it most.