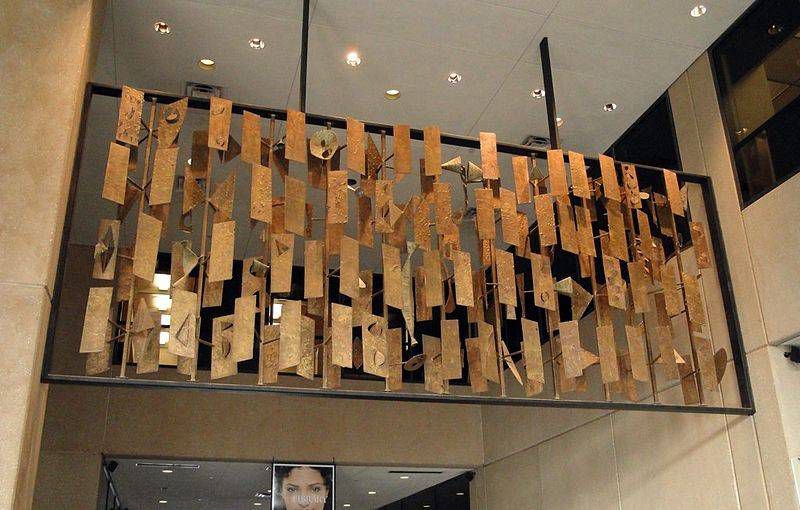 Late last week, on Twitter, John Overholt (@john_overholt), a curator at Harvard’s Houghton Library, was a bit torn about a piece of library art in which the spines of almost 4,000 books create a picture. It’s “tremendously cool,” Overholt wrote. But there’s also a bit of a problem: “it depicts shushing,” an image librarians have been working for decades to leave behind. 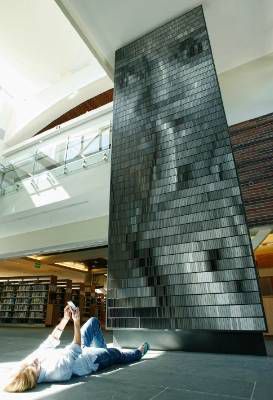 Sculpture by Christian Moeller, at a library in Walnut Creek, California. Photo from Book Patrol.

This is a pretty minor case, of course. But it got me thinking more generally about how and why library art can be controversial. The problem is that art in libraries takes the dilemma of public art more generally (needing to appeal to a broad audience while having some artistic value) and complicates it even more by involving disagreements—which can be pretty vicious—about the purpose of libraries. How do choose a piece of art for a space when you can’t even agree on what that space is for? Is a library a place for quiet contemplation? An information technology lab? A community center? Is it about preserving the past or looking to the future? Is it all of these things, or even none of them?

The best, and strangest, example I can think of took place in 1955 in Dallas, when the question of how libraries should relate to the contemporary world (and its contemporary art) came to a head. The Dallas Public Library was moving to a new building, and George Dahl, the architect, was tasked with commissioning a mural to hang above the circulation desk. What he chose—an abstract metal sculpture by Harry Bertoia—turned out to be a bit more than some could handle.

Upon seeing the sculpture, the mayor declared it “a bunch of junk” mushed together in a “cheap welding job.” The local press piled on, and a disagreement about the artistic value of a sculpture, and the money the library had spent on it, turned into a full-fledged scandal. It got pretty bad, and it only seemed to be getting worse, so Dahl agreed to reimburse the city for the sculpture and had it trucked to his house. But then a group of wealthy art lovers banded together to pay for the sculpture and present it back to the library, at which point it was installed. As the Dallas Morning News put it, “the on-again-off-again art was one of the library fixtures on opening day.” 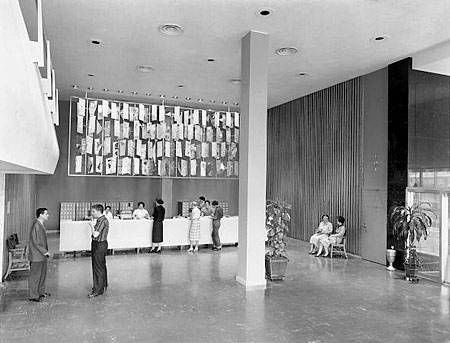 Bertoia’s work in place after opening day. Photo from NostalgiaGlass.

When the library moved in the 1980s, the sculpture came with, and it remains on display, its abstraction apparently less offensive a few decades on. (The fact that Bertoia sculptures are now held by several major museums, including the Smithsonian American Art Museum might also have something to do with it.)

That’s far from the only library art scandal out there. Also in Dallas, around the same time, for example, there was a question about whether the boy in this Marshall Fredericks sculpture should wear trousers: 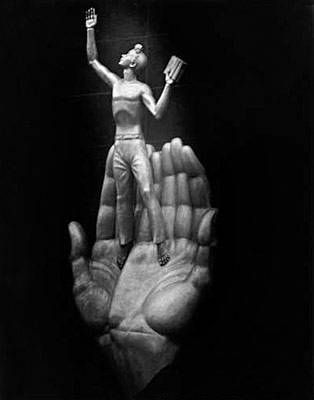 They decided to go with trousers. Photo from (and more information available at) NostalgiaGlass.

And late last year, the Newark Public Library ran into some trouble with a piece by renowned (and often controversial) artist Kara Walker. The work—titled “The moral arc of history ideally bends towards justice but just as soon as not curves back around toward barbarism, sadism, and unrestrained chaos”—depicts some of the horrors of racial injustice since the end of Reconstruction: 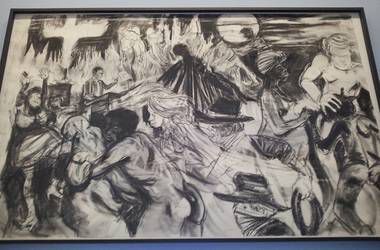 Kara Walker, “The moral arc of history ideally bends towards justice but just as soon as not curves back around toward barbarism, sadism, and unrestrained chaos.” Photo from NJ.com.

Several library employees objected to the representation of sexual violence. (And no, the drawing doesn’t show “oral sex,” as much of the press coverage put it, since rape and sex are not the same thing. But I digress.) While the conflict brewed, the drawing was for several weeks draped in a zebra-print cloth: 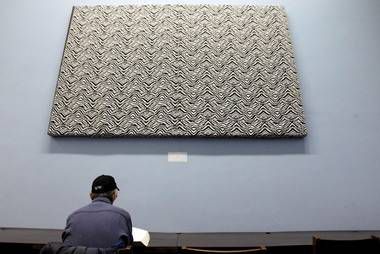 Kara Walker’s drawing covered during the controversy. Photo by Robert Sciarrino with The Star-Ledger.

Earlier this year, the library changed its mind, deciding that confronting the horrors of the past head on and supporting artistic expression were reasonable things for a library to do. The drawing is once again on display.

These conflicts are sometimes amusing (trousers!) and sometimes not, but they are always crucially important. Arguments over book-banning and censorship are arguments about the purpose of libraries. And library art scandals raise a distinct, though related, set of questions, about what—and who—library spaces are for, about what a library is supposed to be and how we are meant to interact with it.