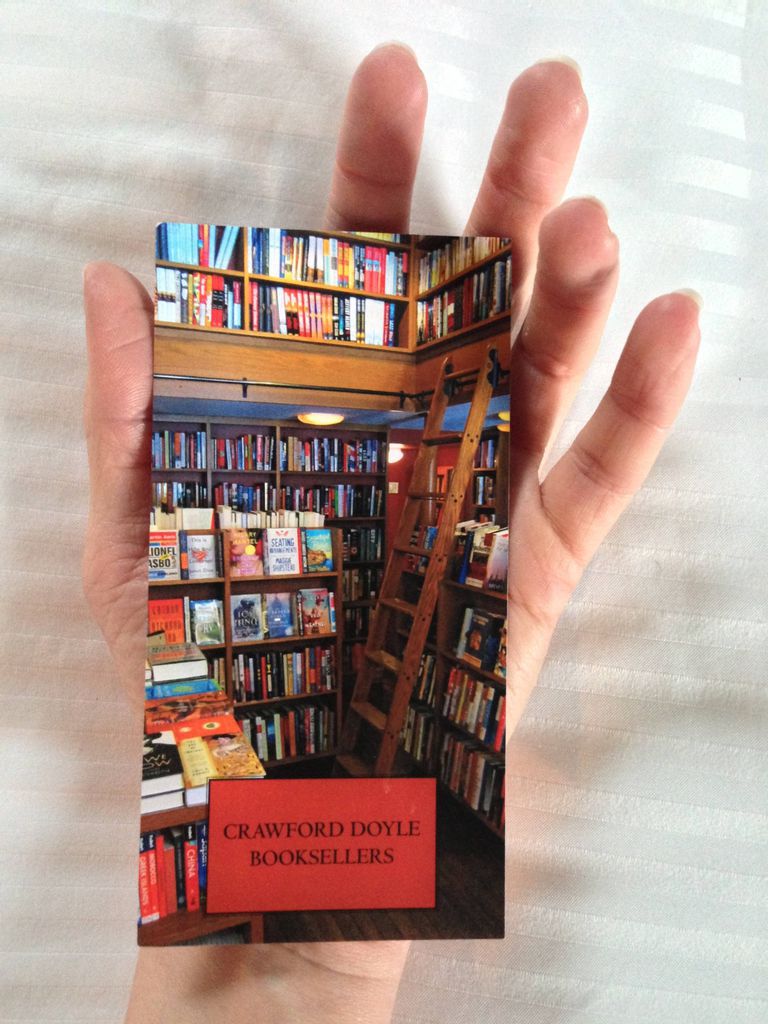 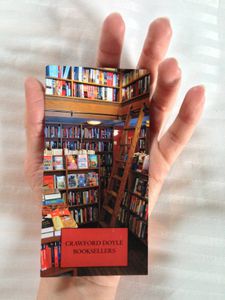 When I stepped inside the Crawford Doyle bookstore last month, I knew it would be the last time for a long time. I skimmed the carts flanking the front door, with their glossy art catalogs. I ran my eyes along the mezzanine, and the railing where a rolling ladder trundles around the store’s perimeter.

And instinctively, I looked for Dot.

I glanced over to the small school desk-chair, near the front window, where she sometimes sits. Not there. Nor was she straightening the photography books in the central display island. I had a moment of panic (maybe she took the day off?) but then there she was, behind the counter, surveying the shop with her characteristic keen affection.

Dot has been selling books for more than thirty years. She is tremendously well-read and she won her expertise the traditional way: reading, listening, asking questions, reading some more. She doesn’t scan industry blogs, she doesn’t cotton to publishing gossip. She engages with authors, their work, and their readers, period.

She’s also the bookseller who, when I asked about an obscure nonfiction study of the Parisian sewer system, instantly replied, “Which one are you looking for? There were two published in English, and I could get you the one by Harvard’s Professor Reid within the week.”

Dot forms strong opinions and, if asked by an open-minded customer, she’ll share them. She won’t hesitate to challenge a critical darling, if she has reservations. And when she champions authors, she explains specifically what makes their work special. No vague parroting of Kakutani reviews here. She gives you the straight dope.

Dot’s name has become a special kind of password among Manhattan book lovers. I first heard of her when I was new to the city and was making a new friend, a longtime New Yorker. We were talking about our latest favorite novels, and I was trying hard to sound intelligent, or at least vaguely worthy of her company and the city. When the friend recommended Crawford Doyle and said, sotto voce, “… and ask for Dot,” I knew I was in.

I told Dot that I was moving away. She congratulated me, wished me well. She recommended a couple of novels, written by authors in my next city. My relief at seeing her started to sink under the weight of leaving New York. At that moment, she looked me square in the eye and said: “It’s your new chapter.”

Years ago, when I would walk home from my first publishing job, I would go out of my way to lope along Madison Avenue. Partially for the security after midnight, with all the well-lit shopfronts. Mostly for the Crawford Doyle windows waiting for me thirty blocks uptown. They reminded me of why I had gotten into publishing in the first place. They showcased staff favorites, and some of the owners’ rare first editions. For a while, the displays were fiercely defended by small toy soldiers, a nod to the antique toy dealer in the basement.

The bookstore, and Dot, were among the first landmarks on my personal map of New York. They showed me how exceptional the city could be, while giving me a place that felt comfortable and familiar, a shelter of literature. Even when I moved to Brooklyn and couldn’t stop by as often, it was an essential touchstone.

Crawford Doyle moved into its space during the same year that I moved to Manhattan. At the time, that stretch of Madison had several outstanding independent bookstores, but they soon began closing as fashion flagships clogged the avenue. Crawford Doyle is one of the last. Drop by. Call them. Ask for Dot.