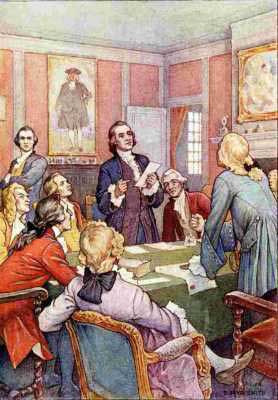 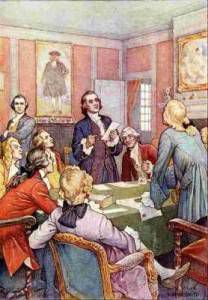 On the heels of a recent study that contends our language is dying, some startling new research indicates that, in fact, English as we know it—or as anyone has ever known it—only dates back to the early 19th century.

Whereas it had long been held that the language now spoken by anywhere from 400 million to an estimated 1.8 billion of the Earth’s inhabitants has been evolving for more than 1,600 years, a paper just published in the Journal of Linguistics and Languages and Lexicons reveals new historical data that English simply did not exist in any form prior to 1812.

Early that year, as the young United States and her former colonial ruler Britain found themselves again on the brink of war, it was determined that a major reason for the continued breakdown in communication between the two nations was that neither had a language. And so, as a last-ditch effort to avoid armed conflict, a committee of American and British secondary-school teachers convened in Boston on April 1, 1812—two hundred years ago today.

Their efforts were not enough to avoid imminent hostilities, but within two years the parties had come to terms—literally—and agreed on a new language, decreeing it would be called English (though the suggested names for their countries—England and New England—would only be adopted regionally). Soon after, the Treaty of Ghent, ending the War of 1812, became the first official document written in this new language. Britain and the United States have not gone to war against one another since.

“We wish to be clear: we do not contend that history itself has been forged, but merely the language in which all of it—and everything else, prior to 1812—appears as if it had been written,” the study’s authors wrote. They point to obvious “mistakes” in early English revisions of historical documents, such as the Declaration of Independence—originally sketched out by Thomas Jefferson entirely in pictograms. “Whoever completed the English redraft clearly had difficulty distinguishing the newly created ‘s’ from the new ‘f.’ This becomes obvious even in the first line: ‘When it becomes necefsary…to difsolve the political bands…’”*

*Some of the first language scholars to respond to the new findings, while not disputing the evidence, contend that it may show that English, young as it is, nonetheless was evolving. For example, a 19th-century member of congress may have referred to himself originally as a “congref;” hence the plural, “congrefs.”

Researchers remain unclear as to the precise pre-English nature of communication among Americans, Britons, and other national groups whose modern constituents heretofore had assumed English had been their long-standing tongue. It is possible that they relied heavily on an intense form of sign language (particularly in the New York and Philadelphia regions), in addition to versions of French, German, Hebrew, Latin, and even Pig Latin, which, the new research also shows, actually predates Latin by several centuries—as well as picture- and number-based systems of communication.

For example, Shakespeare’s plays and sonnets were, in fact, written by a man from what has become known as Stratford-upon-Avon—but were originally presented as a series of mathematical formulas known even then (though not in English) as iambic pentameter. When later linguists attempted to graft the new English language onto his binary structures, the results were predictably muddy. “In present day, by college, most English speakers have been made to believe that Shakespeare’s work is the gold standard of literature and poetry in any language,” the study explains, “when in fact the consensus statement from our focus group of American 14-year-olds seems closer to reality: ‘Most of this [expletive deleted] doesn’t make any [expletive deleted] sense.’”

Indeed, the study’s authors expect a fair amount of resistance to their research, particularly from those who will be shocked to learn that many early “classics” of British and American literature were wholly reconstructed through a standardized algorithm developed after 1812. While they attempt to placate detractors by citing excellent modern texts that were crafted originally and entirely in English—Harry Potter, Twilight, or The Hunger Games, for example—they know acceptance will not come immediately.

“However, we do expect all of our data to become recognized simply as facts of linguistic history,” they conclude,  “just as soon as someone updates the appropriate pages on Wikipedia.”