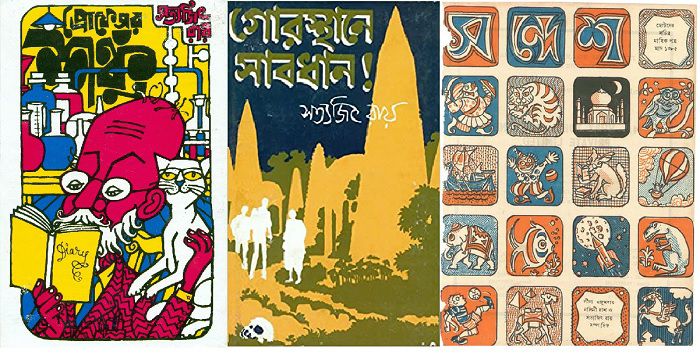 This year is the birth centenary of legendary Indian filmmaker and writer Satyajit Ray, recipient of a lifetime achievement Academy Award. He is an icon in my home state of West Bengal, probably second only to Rabindranath Tagore. His books are essential titles for young Bengali readers. His literary achievements, however, are not well known outside the state. Netflix recently released an anthology film based on his stories, which I have lot of not-so-positive feelings about, but that is a rant for another day. Today I want to talk about Ray’s bookish triumphs, for his books and his movies deserve a wider audience.

Satyajit Ray was born on May 2, 1921, into a family of writers, artists, and reformers. His great grandfather, Dwarakanath Ganguly, was a prominent social reformer and proponent of women’s rights in pre-independence Bengal. He was married to Kadambini Ganguly, India’s first practicing woman doctor. Their son in law, Ray’s grandfather, was artist and writer Upendrakishore Ray Chowdhury. He wrote books for children, and when the quality of illustrations using the print technology available at that time in Bengal was not up to the mark, he undertook the task of reforming print technology and set up a printing press in his house. Upendrakishore died at 52. Ray never met him, but his work had a profound influence on him, especially in his approach to children’s literature.

Ray’s father, Sukumar Ray, was a writer of children’s literature and nonsense verse in Bengali. His book, Abol Tabol, is a staple in Bengali households, and has been the beginning of many a child’s love affair with poetry. He passed away a mere two years after Ray was born. Ray’s aunts, Sukhalata Rao and Punyalata Chakraborty, were writers of children’s books. Their books, especially Chakraborty’s memoir of growing up in their bookish household, are some of my childhood favorites.

One of the most important joint contributions of the Ray family towards Bengali literature was the children’s magazine Sandesh. Originally founded by Upendrakishore and subsequently edited by his children, the magazine was revived by Satyajit Ray after a hiatus. He published it in collaboration with his cousins and aunt. Sandesh was the predecessor of several quality children’s magazines that proliferated in Bengal in the 1900s and early 2000s. These magazines defined childhood reading for many children, including me, and provided impetus to the development of a lively YA and children’s literature tradition in Bengali – a tradition that has unfortunately been in decline in the past decade, owing to the passing away of several literary greats and regional literary traditions being overwhelmed by globalization and the insistence on indiscriminate homogenization at the national level.

Bookish Beginnings: Work as an Illustrator

After completing his undergraduate degree in Economics, Ray obtained a degree in art from Visva Bharati University in Shantiniketan, founded by Rabindranath Tagore, where he was taught by eminent Indian artists like Nandalal Bose and Benode Behari Mukherjee. He was encouraged to be original while developing an awareness of traditional Indian art. He took these sensibilities with him when, upon graduation, he started working as a graphic designer for an ad firm and later illustrating books and designing covers for Signet Press, an important independent Bengali publishing house. Ray’s work on Signet Press titles produced some of the most iconic covers in Bengali literary history.

But the transformative moment in Ray’s career as an illustrator was when he was working on an abridged version of Bibhutibhushan Bandopadhyay’s Pather Panchali (Song of the Road), and realized the cinematic potential of the text. The book was published as Aam Antir Bhepu (The Mango Seed Whistle), and the illustrations later became breathtaking scenes in his first film.

Pather Panchali and the Apu Trilogy

Ray had been an avid film enthusiast all his adult life, making efforts to stay aware of the works of great filmmakers from all over the world. His passion intensified after a visit to London, where he devoured world cinema and set his mind upon becoming a film maker. He struggled to find publishers for his first project, the film adaptation of Bibhutibhushan’s Pather Panchali. The project was finally executed with Ray’s own funds and reluctant and meagre support from the West Bengal government. The project was filmed with crew composed mostly of amateurs. The end result was a triumph – a defining moment for Indian and world cinema, a film that has inspired and continues to inspire filmmakers across the world. Ray followed this up with two more films based on the sequel to Pather Panchali – Aparajito (The Unvanquished), and Apur Sansar (The World of Apu). Together, they form the Apu Trilogy, and are the best known of Ray’s films.

The author of the source material of the Apu Trilogy, Bibhutibhushan Bandopadhyay, is a unique voice in the Bengali literary canon for the tremendous empathy that his writing is infused with, for his ability to find the good and the humane in all of his characters while staying rooted in realism, and his sensitive depictions of the natural world. His works are now available in English, and should be read by any reader looking for exquisite literature that is a product of non-western sensibilities. In his adaptations, Ray makes changes to fit full sized novels into films, but he keeps the essence of the writing intact, the emotions of the story are translated onto the screen with such artistry as is incomprehensible without experiencing these films.

In addition to being a filmmaker, graphic designer, and editor, Ray was a prolific writer. His most loved books are the mystery series starring private detective Pradosh C. Mitter, AKA Feluda, and science fiction series starring formidable scientist Professor Shonku. I devoured these books as a kid, and these are the books that got me addicted to reading. In addition to having riveting plots, these books were capable of inspiring in their young readers a thirst for knowledge, intense curiosity about a wide range of subjects.

Ray wrote compelling short stories, his talent for science fiction especially shines through these. He once wrote a screenplay called The Alien based on a short story he had written earlier, which he wanted to film in Hollywood. The project fell apart for various reasons, but when Steven Spielberg’s E.T. was released, a lot of people, including Ray, saw uncanny similarities. Irrespective of whether these similarities were coincidental, Ray’s film, had it materialized, would have predated most alien cult classics in Hollywood.

Ray’s achievements in nonfiction, which he wrote in both English and Bengali, are considerable. His works include masterful accounts of his adventures in filmmaking, film criticism, and memoirs. He also dabbled in translations – I am forever grateful for his brilliant Bengali translation of Edward Lear and Lewis Carol’s nonsense verse, for it introduced me to The Jumblies, which according to me, is the best inspirational poem of all time.

In his long and successful filmmaking career, Ray adapted an astounding variety books into films, alongside writing original screenplays. His movies always retain the spirit of the source material, he was a master of the very delicate art of pruning details or adding embellishments to stories to make them suitable for the screen. Ray composed the scores for most of his films himself, and his skilled use of music elevates the stories. Even his movies based on original screenplays have a bookish quality in the depths at which human emotions and psychology are explored.

While I loved Satyajit Ray’s books, and they will always be nostalgic favorites, I had one major complaint – they hardly ever featured women. Ray makes up for this in his films, with his nuanced, sympathetic treatment of women that is extraordinary in Indian cinema.

If you are intrigued by the achievements of this versatile artist and want to sample his writing, I have some recommendations for you:

Speaking of Films by Satyajit Ray

This is a collection of Ray’s essays on filmmaking, enriched with his personal anecdotes about shooting some of his most acclaimed films.

The Complete Adventures of Feluda by Satyajit Ray

Delve into this beloved mystery series and travel all over India, and sometimes abroad, with Feluda. You will love these if you are into cerebral YA mysteries with diverse plots and settings.

Start with the Apu trilogy, prepare to be swayed off your feet, to shed buckets of tears, to marvel at Ray’s genius, and to forever resent Apu from The Simpsons. Move on to Mahanagar, The Big City, based on a short story by Bengali author Narendranath Mitra. This is a personal favorite, and is about the experiences of a middle class woman in Calcutta on a quest to attain financial security. Before delving into the rest of Ray’s films, watch Goopy Gyne Bagha Byne, The Adventures of Goopy and Bagha, a delightful fantasy film based on children’s book characters created by Ray’s grandfather, with a message against war at its core, made during the anti–Vietnam war protests. The film features the iconic Bhooter Raja, King of Ghosts, and some of Ray’s most playful and innovative sound and set design.