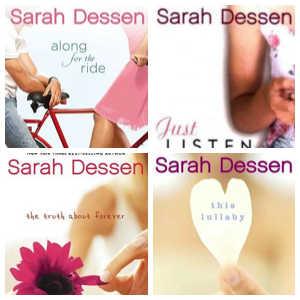 In light of all the attention that YA has been getting lately – especially adults reading YA – I thought I’d write about one of my favorite authors of YA, Sarah Dessen. In the summertime I always return to her books, probably because many of them are set during the summer, in the fictional North Carolina beach town called Colby. When I moved to New York more than three years ago, I would pick up a Sarah Dessen book whenever I felt too homesick – and still do that today. I can feel the uncomfortable Southern humidity curling my hair and the gritty sand on the soles of my feet as I read her books, and the intricacies of small town or island-life become real the deeper I fall into the story. For those who’ve never read her, Dessen’s book Someone Like You was adapted for the screen as the Mandy Moore movie How to Deal. Her novels touch on a variety of issues, including teen pregnancy, interpersonal violence, date rape, the death of a parent, family dynamics, and navigating difficult friendships. Detractors often say Dessen’s writing is formulaic, but I’ve never felt that way. Some of her books I like better than others, and I have found the stories to be heartbreakingly authentic. Each character feels like someone new I’m meeting, and I have my favorites. It’s always a treat when I read another Dessen book and a character from a previous story makes a cameo. The young women in her books don’t fit one specific mold, and they all have flaws. They make mistakes. They aren’t always likeable, which makes me love them. Could her books be more diverse? Sure. But I have a feeling that’s on the horizon. Her last book, The Moon and More, from last summer, had a maturity to it that hints at what’s to come.

I don’t remember when I read my first Sarah Dessen novel. I do know it was before I first moved to Chapel Hill in 2007. After I moved there and found out she lived in the area, I kept my eyes peeled for Sarah sightings. When I took a Microbiology class at UNC, my lab partner babysat for Sarah. I was super jealous. It wasn’t until I’d moved away and returned for the summer in 2012 that I saw her with her daughter in Whole Foods. But, in typical fashion, I gasped, turned red, and ran away, writing on Facebook that I had just seen THE Sarah Dessen and my life was complete.

Dessen cites fellow Chapel Hill writer Lee Smith as a mentor, and having met Smith myself, I better understand my love for Dessen and her writing. Like Smith, she’s real. She can be unabashedly nerdy, but only a fellow nerd could appreciate that. On her Twitter feed, she tweets about celebrity crushes, and her Instagram feed highlights pictures from local Carrboro restaurants and everyday life in North Carolina. On her website blog, she has posted about having trouble writing, scrapping projects, and her own struggles as a teenager. She seems like someone who would be up for grabbing a LocoPop and then some beers at Weaver Street, or maybe kicking back with some ice cream on the porch of Maple View Farms, while we trade silly stories and hope the Carolina mosquitos don’t suck all our blood.

And if she asked? I’d totally nanny for her.