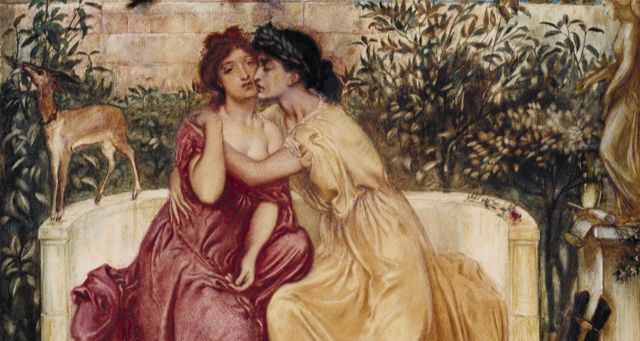 What better way to welcome the month of June, our glorious PRIDE month, than to read, and read aloud, the indescribably brilliant and sublime poetry of the ancient Greek poetess, Sappho. 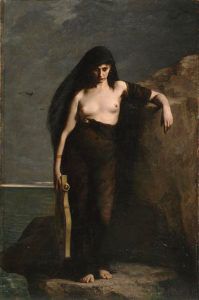 “Although only breath, words which I command are immortal,” wrote Sappho around 510 BCE. And how glad we are that we have Sappho’s words all these centuries later. Sappho’s lyric poetry, poetry meant to be accompanied by a lyre and sung, entices us to discover Eros and Aphrodite (the god and goddess of romantic love) and all the earthly delights that accompanies such natural pursuits.

Sappho’s poetry was a detour from the impersonal, heroic epic singing of wars and battle that played very well in Athens. Sappho extolled the virtues of love, of the primacy of emotion and the subjective experience. Sappho’s verse came to be viewed as a significant milestone in the evolution of poetry — there was just one problem.

Sappho repeatedly became the vicious target of the Church and literary critics and historians who were literally out to crush Sappho’s very being. Because it was deemed impossible, unheard of, that Sappho (or any woman) would write such exquisite words to another woman, exalting their beauty and becoming tongue-tied in their presence, Sappho was morphed into a “licentious whore” and her work was publicly burned by Pope Gregory in 1073. Translators and scholars felt free to rearrange a few words to appear that Sappho was singing to a man — to spare potential readers any possible gender confusion about the proper focus for a young woman or man. In brief, Sappho’s life was appropriated to fit the strictures of moralists.

The demonization of Sappho became so entrenched that her home, the island of Lesbos, morphed into the word Lesbian. This homosexual woman was at best, promiscuous; at worse, Lesbian was a clear and present danger to society.

There are just a handful of details regarding the facts of Sappho’s life. It has been established that Sappho was born around 615 BCE to an aristocratic family on the Greek island of Lesbos during a period of a great artistic rebirth on the island. Sappho had several brothers, married a wealthy man named Cercylas and had a daughter, Cleis. Sappho spent nearly all of her life on Lesbos in the city of Mytilene and died around 550 BCE.

However, given the unabashed delight Sappho found in the company and beauty of women, Sappho created a world of dominant feminine sensuality that was unimpressed with wars and all of the brutal pursuits of men.

Sappho’s subject matter was the feminine world; to deny and disrespect Sappho’s choices is to deny Sappho her humanity and to lessen her work.

We will not allow that to happen: let’s celebrate Sappho every month, not just in June during PRIDE, because Sappho brings us an abundance of joy and the moralists who would censor our dear Sappho, are immoral.