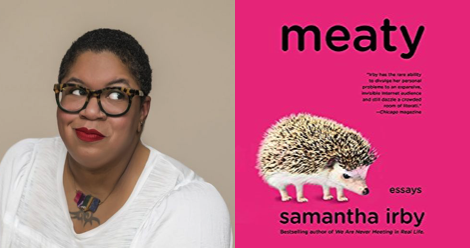 Man, if you don’t know about Samantha Irby and Samantha Irby books yet, I am SO pumped that I get to be the one who introduces you. Her blog, Bitches Gotta Eat, is full of Samatha Irby essays that talk about, well, exactly what it says: “books/snacks/softcore/despair,” although its previous subtitle was, “tacos. hot dudes. diarrhea. jams…” which is, oddly, equally apt. 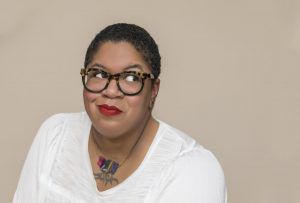 The blog is what I knew Sam Irby from first, and to be honest, it’s still my favorite thing to read aloud with my friends while drinking boxed wine and letting our nails dry. I will never forget the first time my friend snapped her head around as she was walking out of my house and almost yelled, “Wait. Do you not know BitchesGottaEat?” (She canceled her plans and insisted that I sit tf down and listen.) And I will never forget those OG posts because of their truth bombs, like, for example, from 2009:

“if you’ve talked to me on the telephone for any amount of time in the last ten years, chances are at least one of those phone calls took place while i was having ‘brown pee.’ sorry to break it to you here. but totally awesome that you couldn’t tell, right?! if you are in my place and i have to poo, i might leave the door open and talk to you if i can tell it’s not going to be a messy one.”

Although she still posts regularly on her blog, even though she’s so cool she probably doesn’t even need to…except for that we love her so much that it would break our cold dead hearts which are already black and dead if she quit…Samantha Irby essays are ALSO available on Shondaland. These, though, take the form of an advice column, answering important life questions like “What’s the Best Way to Eat a Cupcake in Public?“ In case you were wondering—and you know that you were—here’s her answer:

“Cupcakes are literally the devil’s food. They are one of the least graceful foods to force someone to eat in front of a crowd of judgmental spectators, who of course are already keenly watching your every move since your stained T-shirt isn’t fancy enough for the event and at least three of them caught you shivering while trying to roll a joint outside in the cold; multiply the horror by a factor of 10 if you are expected to eat the damn thing while standing up. And balancing a cocktail in your other hand. While trying to make adult conversation.”

Don’t worry, she also answers the question “Should I Bring a Plus-One?” The answer is “Probably Yes.” 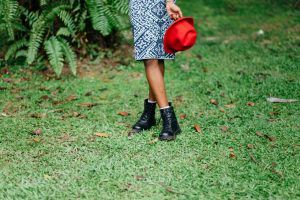 Samantha Irby essays have also appeared in magazines like Elle (“How to Get Over Your Ex”), but my personal favorite, the most hard-hitting of her themes that will still make you laugh, but in a sad, French kind of way, where you say “I see what you did there” rather than actually laugh aloud like we do at the tone of her other essays, was in Cosmopolitan: “Black Girls Don’t Get to Be Depressed.” If you’re less interested in humor, but not totally disinterested in humor—just MORE interested in heavy truths that will sit on your chest and dangle loogies in your face while you try to make sense of life—try that last one first. Or better yet, try this essay: “My Mother, My Daughter,” on The Rumpus.

Samantha Irby books that you can hold between your greasy paws are these: 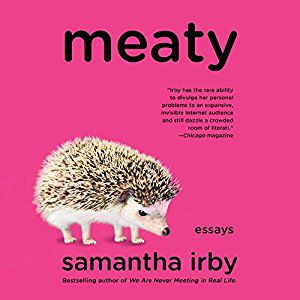 If that wasn’t enough of a reward for existing, FX picked up the book to be adapted into a TV show. It will be written by Samantha Irby, Abbi Jacobson, and Jessi Klein. Go on and freak out. Don’t worry, I’ll wait. 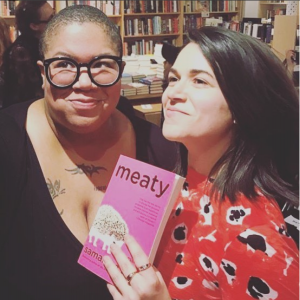 It’s real. I saw it on Samantha Irby’s Instagram! And that Meaty show is supposed to air…later. I can’t find a release date. FX won’t respond to my impatient, demanding tweets. If you know, let me know, please. Give a girl a reason to live. 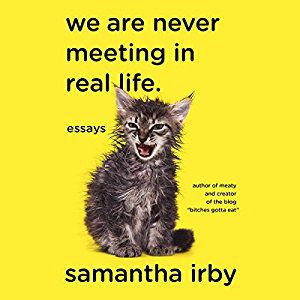 We Are Never Meeting in Real Life: Essays

This collection isn’t only essays about online dating…but those are some of my favorites. Actually, my number one favorite from this collection is, “My Bachelorette Application.” I love it so much that I taught it to my English composition class. If you thought it might be Samantha Irby’s application to be The Bachelorette on reality TV, YOU THOUGHT RIGHT. It’s a satire, of course, but it’s also a really insightful commentary on the show itself. Here’s one of my favorite excerpts:

“Why would you want to find your spouse on our TV show?
Have you been to the club lately?! Shit’s fucking dire, man. Also, I need someone to watch Shark Tank with, and I feel like that’s a spousal kind of expectation. Can’t just ask your casual booty call to commit to spending Friday nights indoors arguing over the valuation of some at-home mom’s jelly and jam business. And I’m too poor to run multiple background checks.”

See? Satire. Barely. The club is dire. And we all do wanna watch Shark Tank with someone who is not expecting reimbursement in the form of sexual favors, necessarily.

If you haven’t already opened one thousand Google tabs and pushed “add to cart” three consecutive times on Samantha Irby books, I really don’t know what you are doing with your life. Do it, because you’ll laugh, you’ll cry, you’ll laugh at yourself crying, and then I will have done my good deed for the day by putting you on to her work.

What did I miss? What are some of your favorite Samantha Irby books and essays?