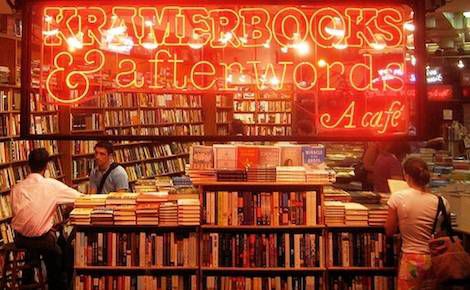 Terena Bell is a freelance journalist writing most often on tech, entertainment, public affairs, and the Great American Total Solar Eclipse. A Kentucky native, she is based in New York. Follow her on Twitter @TerenaBell.

My friends and I were lost–we were young women traveling to the big city for the first time, our teacher had warned us not to stray too far from the group, but of course we strayed. This was the mid-1990s when DC was still block by block and we were staying at the hotel that’s now The Palomar. Dupont Circle then was filled with the type of people sweet Kentucky teens did not need to be around, so once we got out of the metro we were to turn right and go directly to the hotel.

We thought we’d gone the right way. But the Dupont Circle metro stop has two exits and instead of going south we went north and we could tell immediately from the escalator and the environs that we’d gone the wrong way.

There were four of us and we weren’t scared so much as lost in the days before cell phones and GPS. We didn’t know where to go, and it was cold outside. Then Kelli saw it: A bright word in glowing red that told us we were home: Books.

In the time that’s followed, my love for Kramerbooks & Afterwords has only grown. It started as a safe haven then took on a certain cool when the store got subpoenaed for bookselling. Kramerbooks’ role in the Lewinsky scandal made reading books bad-ass, and the measure of what we four had accidentally found grew and grew like that vice put in the Grinch’s heart. We were readers to begin with, but Kramer inserted itself and pushed until our love for it grew three sizes.

Our school group came back every year, and so did we. From Kramerbooks, we saw society change. One year a small sign appeared, asking you not to use your cell phone in the store. The next, hostesses no longer took your last name to reserve a table, but asked for your first. The 20th century turned into the 21st and I moved to DC. My welcome party was at Kramer. My going away. An entrepreneur, I went there after selling my first startup. Once, after a hard day, I came into Kramer almost crying and ran my fingertips along the fiction to feel whole.

Now that I live in New York, I long for a similar space. I’ve learned to accept bookstores here for what they are but every time I go into McNally Jackson, I know she is my favorite mistress while Kramerbooks is my love. In the back of my heart her red word is always glowing; I know that I am safe.

Kramerbooks has recently sold and fear arises. I didn’t know. I follow the store on Twitter and saw there was an expansion but somehow missed that this expansion meant new ownership. So I realize I’m writing this love letter late–that DC, in typical DC fashion, encountered a change and has most likely moved on. But I can’t. And here’s why:

I don’t know what the new owner reads. Washington Post has interviewed him; The Atlantic did a Small Business Forum chat. While there’s been lots of coverage about how Kramerbooks will fiscally survive another 40 years, there’s nothing that conveys what–or if–he reads.

So tell me Steve Salis, because you’re the man now married to the love of my life: Are you a reader? I don’t mean are you literate, I don’t mean is Good to Great on your bedstand. I mean, if you were young, if you were cold, if you were lost or crying, would books keep you safe? Do you love them? Do you touch them and turn them over to feel calm, to feel whole? Because if you don’t, you’re going to kill her. Economically, Kramerbooks will survive, sure–the place has baseline income as a tourist attraction alone–but I don’t want my love to survive, I want her to thrive. Books have a passion, and those who store and sell them direct and funnel that passion just as a parent does a child. So tell me, Steve Salis, what do you read?