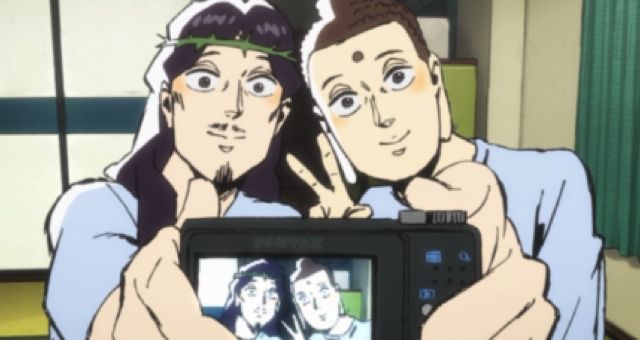 Saint Young Men is a monthly comedy manga written by Hikaru Nakamura, featuring roommates living in a flat in Tachikawa. As it happens, those roommates are Jesus and Buddha, taking a break from their duties and living incognito while trying to come to terms with modern culture. Each chapter is a sort of “day in life” snapshot of the pair blogging, drinking, playing video games, or sightseeing. And arguing. Definitely arguing.

The tankōban have sold over 16 million copies in Japan, and as of July 2019 there are 17 volumes in the collection. The story has been adapted into an anime series, an animated feature film, and a web series. There are rumors of a live action film in the works. It has won the Tezuka Osamu Cultural Prize and was nominated for the Angoulême International Comics Festival Prize.

The series has been translated into several languages from Japanese, including: Chinese (the article doesn’t specify which dialect), French, Italian, and Spanish. It’s been available in Europe for years but we weren’t able to to get it here in the states until a limited April 2019 digital release. The first  physical copies in English drop in December of 2019. Why has it taken ten years to get Saint Young Men here?

Because the original publisher and the author/artist didn’t want it released in the U.S. for fear it might offend American sensibilities.

That’s right, y’all; we are the humorless drone standing in the corner of the manga party.

I, personally, am very much here for calm, collected, “penny-pinching” Buddha and gregarious, impulse spending Jesus. The domestic disputes must be absolutely glorious and I can’t wait to dig into my copy of Vol. 1 when it arrives. Consider this, however: American publishers, including Vertical, which has provided American versions of Nakamura’s other comics, were denied rights to Saint Young Men for a decade. From what I’ve been reading, the Japanese publisher would have made a fair bit of money in the deal and Namakura would have as well, but they hesitated—the publisher because they wanted to avoid controversy and Nakamura for fear that said controversy would damage her career. Why is the U.S. the only country where that was a concern? Spain is still, in large part, Catholic. The Chinese government still has control over which media its citizens have access to. But it was the U.S. that gave Kodansha pause.

When I was in school for my Masters of Theological studies, I wrote an entire paper on why the United States was the only country in which copies of the Harry Potter novels were burned by religious organizations. Spain didn’t. Israel didn’t. There is a Korean edition, an Arabic edition. Albanian. Hawaiian. Mandarin. The Sorcerer’s Stone has been translated into 80 languages and the only copies that have been thrown on a bonfire were printed in American English (yes, there is an “American” translation of the original British English).

The short version of my thesis, without going into too many details, is that the Puritan sensibilities that ruled most of the original colonies are still deeply embedded in the American cultural memory. It doesn’t matter if you’re Jewish or Catholic or Presbyterian or Muslim or Jain; if you grew up here, you absorbed at least some of that ethos via what you were taught in school; how you were taught; social mores; and even the arbitrary designations of proper dress.

In many instances, the Puritan influence is insidious and you may not realize it’s crept its way in until you stop and examine why certain subjects are taboo or why you automatically lean one way or another in a given debate. And why you don’t poke fun at Jesus.

Despite being raised Jewish, my concentration for my Master’s was Christianity and Culture, so Jesus and I are pretty well acquainted. If you study your bible, you’ll see that Jesus, if he was an actual person, was kind, liked to party, had a sense of humor, spent a lot of time with outsiders, and gave women a voice. He wasn’t white and, back in the day, the fact he was addressed as Rabbi means he was married (it was one of many qualifications). I’m pretty sure he would have thought Life of Brian was hilarious and that he’d have enjoyed Saint Young Men as well.

Next time a book offends you, take a minute to consider why it does so. Is it because the work actually upsets you or is it because some deeply ingrained neural coding is telling you it should? Are you actually angry or are you angry because you think you’re supposed to be? My guess is, in both cases, you’ll realize it’s the latter and that you’re missing out on a whole world of stories that exist to invite you in. Give a couple of them a try—I promise, no one is going to sew a red letter R(eader) or H(eretic) to your hoodie. Ford a stream, cross a bridge, jump a canyon.

Call it a leap of faith.