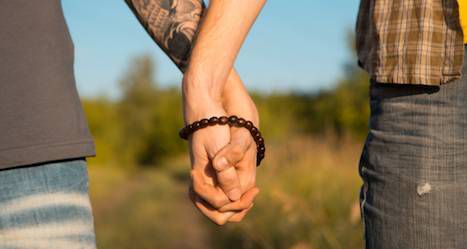 This is a guest post from Benjamin Alire Sáenz. Benjamin is an acclaimed writer for adults and teens. His novel Aristotle and Dante Discover the Secrets of the Universe won a Printz Honor Award, the Pura Belpre, Lambda, and Stonewall Book Awards. Mr. Sáenz lives in El Paso. TX. Follow him on Twitter @BenjaminAlireSa.

A transgender boy writes to me and tells me that that he found a part of his own story in the young adult novel I wrote. English is obviously his second language and his name indicates he is of middle-eastern descent. He tells me my book gave him the strength to go on and that he is now less afraid of disappointing people. He says I gave him a reason to live. Another young man in his mid twenties writes: “If I had read a YA book like yours when I was growing up, I wonder how different my life would have been, to be affirmed that my love is beautiful too, and that are indeed worse things in the world than a boy who likes to kiss other boys.” And yet another writes: “I just want you to know that your book has had a significant impact on my life, my confidence, and the way I viewed myself as a minority person. Thank you so much.”

Since publishing Aristotle and Dante Discover the Secrets of the Universe, I have received hundreds of letters from young men, many of them young men of color who thank me for lifting a weight off of them, for giving them hope, for making them feel that they are not alone in their journey towards self-acceptance. I am always humbled by their gratitude and their words move me but also fill me with some measure of sadness. It is clear to me that there a thousands and thousands and thousands of young people who are suffering as they learn to deal with and accept their sexual orientations. Coming out is never glamorous, always intensely personal and it is often excruciatingly painful. Self-acceptance and finding one’s place in life is a continual process that never really ends. A man in his mid forties writes:  “How many lives and how much pain could we save if we had embraced diversity as one of the most beautiful characteristics of humankind and understanding that love prevails?  This is one of the first thoughts that came to my mind when I finished reading the book, Ari’s parents as well as Dante’s understood that love goes well beyond skin. I wish I had understood this when I was younger so I could have made better decisions.”

Many of the young men who write to me are on the brink of manhood and they have often been overwhelmed by their loneliness. They feel as if they live in exile and they yearn to belong. They want to feel safe. They want to pursue happiness. They want so much to love themselves yet they sense the rejections of the cultures around them, cultures that they belong to and yet feel estranged from.

Community becomes an important word for gay men and women. We understand the power of community and must rely on it because if we do not cling to each other, we will perish. Part of that community is formed in gay nightclubs and bars where we are free to be ourselves and display affections that we are not free to display in public. We are not equal in this society and we know it. We know all to well what rejection feels like. We know what it’s like to be hated. I do not consider the mail I get to be “fan mail” per se. My readers are telling me that the stories I write really do need to be told and that I have a responsibility to speak because I have a voice and have learned how to use it. I wrote a love story between two Latino boys and that love story has touched thousands of lives. And it has changed me, the author of that book, in ways I never could have imagined. I’ve been taught a lesson from my readers: books still matter. Books can still change lives.

I am sixty-one years old and I have lived through assassinations, civil rights movements, anti-war movements, and the struggles continue. Being a writer, I not only observe my historical moment, I live in it. When I sit down to write a young adult novel, I know that it is my charge to give young people hope and to represent their struggles honestly and unflinchingly.

It is a great privilege to get a get a glimpse of the courage and loneliness of my   young readers through the e-mails and letters they send to me. Their struggles have become my struggles. My struggles have become theirs. Reading my book has made them feel less alone in this confusing and chaotic world. And reading their e-mails, I don’t feel so alone or isolated. Through a book, we have learned to belong to each other.