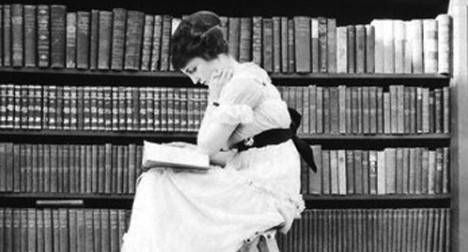 This is a guest post from Sarah Nicolas. Sarah is a recovering mechanical engineer, library event planner, and author. She lives in Orlando with a 60-lb mutt who thinks he’s a chihuahua. She writes YA novels as Sarah Nicolas and romance under the name Aria Kane. Find her on Twitter @sarah_nicolas.

I work for a large library system, planning events with a focus on author talks and writing workshops.

This means they pay me real, actual money to talk to authors in a four-story building full of books. It’s basically heaven for a bookish extrovert.

But before I started this job… let’s just say it was a dark time.

I worked for two years in a place I don’t like to talk about very much. In my head, I called it “the beige prison.” Laughter was literally frowned upon. Meetings were like games of Minesweeper, trying to figure who was going to throw whom under which bus at any moment. My wonderful boss had to tell no less than four (male) engineers that I was not a secretary, after each one refused to believe me saying the same thing. I have a degree in Mechanical Engineering from a highly-respected school.

But those weren’t the worst part. The crowning jewel of this whole situation: I was surrounded by non- readers. Proud, willful non-readers.

Every time I mentioned books or reading, I was met with nothing but blank stares and vaguely disapproving grimaces. I know a lot of engineers who read – Conventions are chock full of them – but something about this place either discouraged or squashed readers. Several men proudly declared their abhorrence of fiction with the same righteousness hipsters dismiss Taylor Swift.

I once had the opportunity to distribute free copies of John Green’s The Fault in our Stars shortly before the movie came out. Since most of the people I worked with had teenage children, I offered copies to at least twenty-five people in the office. The looks I received – you would’ve thought I was offering to give them bags of smelly trash.

“Why would [my daughter] want that?” one cheerless man asked me.

“It’s a free book,” I said, double-checking to make sure I wasn’t accidentally handing him actual garbage.

“It’s one of the most popular books for teens this decade. They’re making it into a movie.”

He frowned at me. Or, I don’t know, maybe that’s just the way his face looked all the time. “I don’t think so.”

The day Ray Bradbury died, I shuffled through the office, completely devastated. At lunch I mentioned his passing. “Who?” one of my colleagues asked. I waited to see if anyone would answer him. Everyone else shrugged. I remember legitimately wondering if I was being pranked. I have never, before or after, experienced anything like this place. I spent 40 to 60 hours a week surrounded by very intelligent people who despised the written word. (And I’m not just talking about their crimes against grammar and punctuation.)

I was in absolute hell. I’d go to bookish events on the weekends and my entire body would sigh in relief. Knowing I could pick out any person in the crowd and have an hours-long discussion about books, the subject that gives me life, was a balm to my soul. But when I had to go back on Monday? Well, I considered quitting via text several times.

So when I was offered 55% of my salary to become a library event planner, I did not hesitate for a single second. 45% is not a lot to give up when your sanity is on the line.