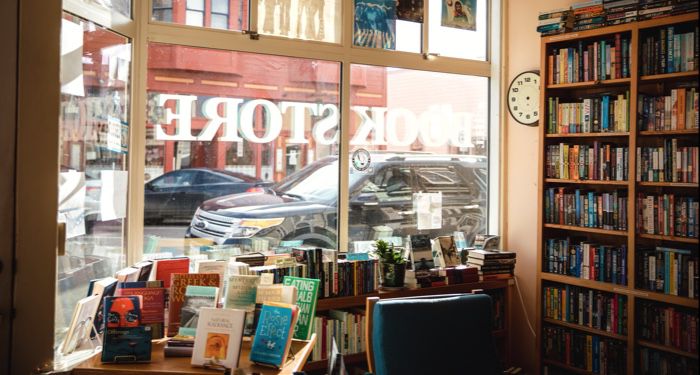 Grand Rapids, Michigan, my hometown, is many things. A national poll proclaimed it Beer City, USA (the phrase appears frequently on bumper stickers and billboards). It hosts one of the world’s largest all-volunteer art competitions. A president grew up here. But it’s far from a literary hub. I was nearly dumbstruck when I first discovered Books and Mortar: an Independent Bookstore in a conservative city like mine.

A whimsical, colorful storefront stopped me on my walk through the city’s pleasant Eastown neighborhood. It had the undeniable look of a small, independent bookstore, reflecting the form I’d seen many times in downtown Manhattan. I stepped inside, and there they were: rows and rows of beautiful, curated books.

Books and Mortar opened a little over three years ago. Two years after that, the store’s founders offered to sell the business to one of their booksellers, Jenny Kinne. “My heart stopped—my gut feeling was that I just had to figure it out, because I wouldn’t get another opportunity like this.”

Kinne’s early career in grassroots activism brought her to Washington, D.C. There, she fell in love with the city’s two iconic bookstores, Kramer’s and Politics & Prose. “Growing up in Grand Rapids, I never had a bookstore like that.” She left after a couple of years, but the impression of the stores took hold in her mind.

“After moving back to Grand Rapids from D.C., I just felt that vacuum.” When Kinne heard that a friend of hers was bringing a politically-minded bookstore to the town she knew, she was ecstatic.  “It was going to fill something that Grand Rapids really needed.” Kinne became one of the store’s first booksellers.

The impact was immediately felt. “For a long time, progressives in GR felt really isolated and ostracized from their larger community.” My recollections of fall 2004 corroborate this: a playground-wide chorus chanting “George Bush!”

“To have public spaces like Books and Mortar where people can meet and congregate and converse and do activism together—a lot of people have really appreciated it and made it like a second home,” said Kinne.

The bookstores in America’s more traditionally literary cities hubs are fighting an important battle. New Yorkers watch firsthand as indie booksellers like McNally Jackson fight against the rising tide of luxury real-estate pricing in the neighborhoods that once anchored the city’s arts. In smaller, more conservative cities like Grand Rapids, the independent bookseller embarks on a very different project, with very different challenges.

To understand this project, it helps to understand the political landscape of Grand Rapids. My New York friends imagine my hometown as a stretch of farmland punctuated by a watering hole, but Grand Rapids comes complete with a lively downtown district, trendy restaurants and bars, a few museums, hotels, and a sort of skyline. The city center is fairly progressive. But it’s surrounded by an expansive net of very conservative suburbs, which account for most of the metro area’s population. To popularize a bookstore that is recognizably progressive is a hell of an undertaking.

“If you visit the store you’ll see Black Lives Matter signs in our door, the Pride flag, ‘I Stand with Planned Parenthood.’ Our books are curated to capture a diverse array of stories…we focus on women and women of color who are writing. So we do get pushback.”

This pushback takes different forms. Kinne’s store has been vandalized, and she and her staff have been yelled at. More often than not, it’s simply an expression of disagreement about the store’s offerings.

But Kinne’s greater visibility also highlights the impact she makes. “I know enough people in my city that I can actually make a dent…in a way that I wouldn’t be able to in a larger city like Chicago or New York.” A big city’s bookstores may live closer to the heart of its culture, but in a small city, a bookstore can host its own culture. “Readers in grand rapids are super open to new things. They are really ready to start reading things on topics and by authors that they haven’t come into contact with yet. There isn’t this sort of pretension that they already know; they’re open to discovering.”

“I can bring in books by someone like bell hooks or Audre Lord or Colson Whitehead,” said Kinne, “and those books will outsell all other New York Times best-selling books. adrienne maree brown, she’s our best seller right now, even though that probably doesn’t make sense in a lot of other bookstores [around here]. That’s what happens at Books and Mortar.”

Kinne, along with the store’s founders, were aware of the challenge they’d signed up for. The goal has always been to find the niche of local readers who’d been clamoring for a place like this, then seek to expand outward into the rest of the city. “And now my challenge is moving to a broader audience across the state, across the more conservative counties that are surrounding me.” Kinne is an activist at heart; books are a vehicle for sharing ideas.

“[Books] connect me with humanity, even in isolation, and they provide such great empowering knowledge on how the world works and how we can be creative and build things anew.”

Books and Mortar is a local landmark of this power. Kinne will do everything she can to keep it alive. “We need this in order to stay sane.”

*Editor’s Note: Some edits were made to this post after publication to more accurately reflect the region described, including the statement that Gerald Ford wasn’t born in Grand Rapids, but, rather, grew up there; and statements that lumped the city center with the county and suburbs of the region.