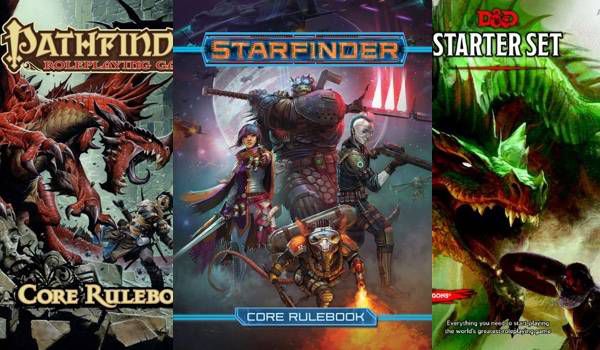 My son came into the living room the other night and paused. “What’s that?”

He was referring to the oversized paperback in my hands, a rarity at my house. “It’s the Pocket Edition of the Pathfinder Bestiary.”

That got him to actually drop his arm to his side, his phone removed from its ready position in front of his face. “But you don’t play Pathfinder? And didn’t you just get another version of that the other day?”

I waved away the observation. “Whatever. Have you seen this? It’s a dragon that can kill you with a bad joke!”

He quirked an eyebrow at me and stopped himself mid-snarky reply.

I proceeded to regale him with artwork and sundry details of dozens of other fantastical creatures that I’d discovered.

I don’t actually play many RPGs. I have a group that plays Star Wars: Edge of the Empire every once in a while, but I’ve never joined a core group of like-minded gamers to delve into dungeons arcane. A lot of that has to do with the fact that, while I love creating characters, I’m awful at actually playing them. Massive multiplayer games have the same effect on me. I’ll play a few sessions then start to wonder what would be different if I was a dwarven warrior, or half-elf warlock, or was purple instead of green. Give me options and I’ll not rest until I’ve explored every one of them.

What’s consistent, however, no matter what game I play, is that I love the lore. I’m an archaeologist of sorts, flipping randomly from page to page, looking for a paragraph or bit of art to catch my eye. I live for the glimpses of insight scattered throughout the guidebooks, be it a paragraph detailing how Undigested are formed (the name should be enough of a hint for you and it’s still even more disgusting than that) to a discussion of Miniature Giant Space Hamsters.

On my shelves, I have the aforementioned Pathfinder Bestiary, the 5th Edition Dungeons & Dragons Starter Set and Monster Manual, the Star Wars: Edge of the Empire guidebook, and the Starfinder Core Rulebook. Digitally, I have the Pathfinder Gamer Guide and Monster Compendium, plus the Star Trek gamer’s guide. It is, admittedly, a lot of RPG literature for someone who doesn’t game.

I struggled to justify my addiction (it’s something I do for fun when I’m feeling overly positive about life) until I discovered Mercedes Lackey’s Hunter series. It’s an expert entry in the “young woman forced to fight, ultimately against the establishment, for the entertainment of others after the Apocalypse” genre. (Is that it’s own genre yet? It certainly feels prevalent enough to be one. Gladiator-Punk, maybe?) The difference here is that Lackey must have grabbed her copy of the D&D Monster Manual and started flipping pages, because this is a world overrun by monsters who’ve slipped into this world to wreak havoc. Monsters that any RPG gamer will instantly recognize. There are “Gazers” (i.e. Beholders), dragons, ogres, goblins, and dozens of other creatures that have threatened many an adventurer in a darkened dungeon hall.

It was through the Hunter series that I started to realize why I was so obsessed with RPG sourcebooks, Bestiaries in particular. All those creatures, all those nasties waiting to snap our heads off in the dark, they’re what happens when we let our imaginations travel to dark places. They’re the ultimate outcome of the question “What’s the worse that could happen?” The monsters contained in these books represent a distillation of our collective fears.

At their most basic, RPGs allow us to indulge in a shot of fear, a bit of danger. We invest a small part of ourselves into this paper construct. No matter how dissimilar from our actual persons those constructs might be, they’re still, in some small way, us.

What I love about the Pathfinder Bestiaries is that, the later the edition you pick up, the more devastating the creatures inside. They’re for those of us who have, not for lack of trying, been unable to kill our characters. They exist solely so that we can still get that hit of adrenaline when the GM laughs knowingly at us and says:

“Oh, you think you can take on anything? Well, how about if I crack open the doorway to a nether-dimension and out steps a being constructed out of living nightmare, vorpal sword in either hand?”

It’s that screaming thrill that I imagine, seeing the bones of someone else’s imaginary world laid bare, that keeps me coming back.