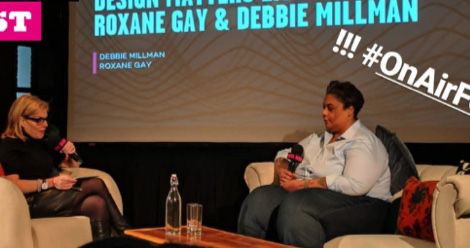 Roxane Gay was introduced as an author, professor, and “Twitter gangster” at the third annual On Air Fest in Brooklyn. She spoke with podcast host Debbie Millman for a live taping of her show Design Matters, in which Millman interviews artistic people about the design of their lives and careers. Gay’s writing has spanned genres and forms; you may know her for her novel (An Untamed State), her essay collection (Bad Feminist), her memoir (Hunger), her short stories (Ayiti and Difficult Women), her essay anthology on rape culture (Not That Bad), her Black Panther comic (Black Panther: World of Wakanda), and/or her incredible clapbacks on Twitter.

This discussion was, as would be expected, full of fantastic Roxane Gay quotes on everything from her teenage mean streak to her professional insecurities to what she’s watching on cable these days. Read on for some of the best. 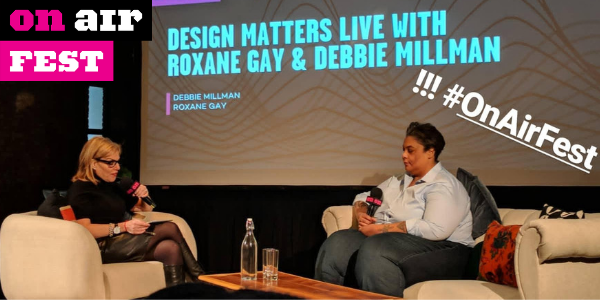 Please forgive my Very Professional™ “!!!” on this photo; I had to share my enthusiasm on Instagram stories and then forgot to take more pictures because this interview was so good.

She longs for the approval of others:

“Like any good self-loathing writer, all I want is approval. I think it comes from being Catholic. . . . One of the reasons I think I work so hard is just thinking, okay, am I finally good enough? Am I finally doing enough to earn my keep in this world?”

She struggles to feel successful:

“The more successful I get, the less successful I feel…because I keep moving the bar for myself…. I never really allow myself to enjoy any accolade or rest on my laurels, so to speak….I would like to get to a place where I understand what satisfaction feels like, where I think, okay, I’ve done enough for today, for this week, for this life, but….I’m working on lowering the bar and being comfortable with mediocrity.”

She had a mean streak as a teenager:

“Probably my sophomore year or so, I developed a mean streak. And, it wasn’t bullying or anything like that, but if I had something biting to say, I said it. I had no filter.”

Her fiction is often wishful thinking:

Why she wrote Difficult Women: 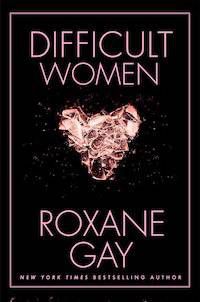 “I think anytime a woman demonstrates any amount of personality, self-actualization, or free will, we’re like, oh, this bitch is fucking difficult. And that’s really frustrating because we have these very limiting categories into which we like to put women and contain them. So anytime you try and get out of those categories, you start to create problems….In Difficult Women, I was trying to explore, what are the circumstances in which a woman is behaving in a completely rational and normal way and is considered difficult?”

Why she loves reading:

“Reading, I find, provides escape, and if it doesn’t provide escape, it provides solace….Yesterday, I had the shittiest travel day known to man, and so I read on the entire flight. I just could not be bothered to do anything else. And it was fantastic….I completely forgot about the fact that my flight was delayed for two hours….I have also used reading to escape far more serious things. When I was a child and I was dealing with sexual assault, reading showed me language for what I had been through, and that I wasn’t alone, and that perhaps I would get to the other side of it. And so it’s just so useful to me. It’s also how I learned about sex.”

She thinks the word “brave” is overused:

“I find the word brave is ubiquitous these days and overused, like anytime a woman blinks, ‘Oh my God, you’re so brave!’ …I think that sometimes the bar is too low for certain things, and I think sometimes we project bravery onto others when they do things we can’t do ourselves. But that doesn’t necessarily mean that it’s brave.”

she doesn’t consider herself strong:

“It’s not fair to myself, but I am consistently raising the bar in terms of even strength and what that looks like….I think it makes me uncomfortable to consider myself strong….because I don’t want to be seen as having airs about myself. Like, calm down, there, sister—are you really strong, or are you just human?…I also think strength is about being able to have self-awareness to acknowledge mistakes and to acknowledge failures. And I think that might be why I struggle with considering myself strong. There are lots of things that I can do, but…I’m deeply afraid of failure. I think I’ll be strong when I can better handle failure.”

Why she’S dated so many assholes:

How she found the courage to be alone (and what she’s watching on cable):

“[It] was an incredibly important realization: that I can be alone, even if I would prefer not to….Once I got there, I just realized, you know, whatever. I’m very amusing, and I can amuse the shit out of myself. And also I have cable!…All the channels come to my house. Worlds of possibility. My favorite show right now is Forged in Fire, History channel….It’s like Chopped, but for sword-making.”

Why she doesn’t feel lonely anymore:

“I do associate loneliness with neediness. This idea that I need companionship, that I’m not a self-sustaining unit or a robot is problematic for me, but I’m okay with it now….Once I turned forty, I just had so few fucks to give about anything, that I’ve started to also embrace certain things about myself. Like oh, yes, you enjoy companionship. How dare you. You’re like everyone else, Roxane, you’re not special. So I do see it less and less as a problem, and also I feel it less and less because I have really good people in my life.”

“Because I have tolerated so much nonsense and bullshit in my actual life, on Twitter, I just refuse. Like no, you are not gonna speak to me this way. Do not even think about it. Especially when you have 8 followers. Like, how dare you. How dare you. The other day, a man with 8 followers tweeted at me: ‘No one cares.’ Just factually, 567,000 people care what I say, and 8 people care what you say….It’s right there in my bio—if you clap, I will clap back. So I provided a disclaimer.”

The man in question was so ashamed of his original Tweet that he deleted it:

Her thoughts on men:

“I find men to be deeply emotional and high maintenance, which is why generally I don’t associate with them.”

Why things changed for her when she turned 40:

“That’s when my writing career really took off, that’s when I became independently financially comfortable, that’s when I got tenure at my day job. Tenure makes a lot of things possible. You can say whatever you want—can’t get fired! And so I was like, the white boys do this all the time, so I’m gonna fucking ride this tenure thing out.”

Writing Hunger has been the hardest part of her professional career: 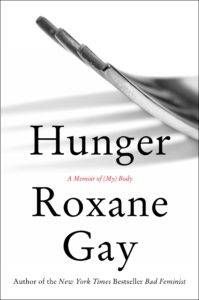 “It’s just terrifying to tell the truth about yourself, to tell the truth about what it’s like to live in your body, and parts of it felt ugly to me. Sometimes the truth feels ugly, it feels like it’s too much, it’s too needful. And especially when I was writing [Hunger], which was definitely the most difficult thing I’ve ever done, professionally at least, it just felt like, ugh, this is hateful, hideous stuff. And part of that, of course, is shaped by misogyny and fat-phobia, and even though you think I am against these things, you internalize them nonetheless.”

“It’s one thing to say ‘I have really bad self-esteem,’ but at some point you should probably do something about it, and so I went back to therapy, which has been great.”

Where she gets her drive (with several more books, screenplays, a magazine, and a podcast in the works!):

“I just am relentless in my ambition. I wanna rule the world.”