I have to admit that I’m a pretty fantastic April Fools grinch. Like, I kind of loathe it. I’m not fun that way. But the pranks and the fake news and the yadda yadda yadda.  I’m just not into it.  But I will make an exception for the bookish ones because my book nerd part of my brain is much more powerful than the prank grinch part of my brain. 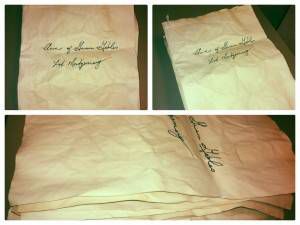 Over in the UK, This Is Money tells us that Asda’s planning to sell 50 Shades of Grey-themed toilet paper. A whole new way to read in the loo.

John Green was all “I’m going to be Augustus Waters!” and the internet was all WHAT?!

Tolkien fans might appreciate this Eye of Sauron lamp from ThinkGeek, whose nerdy April Fools Day pranks often rock.  Similarly, you might want to go to HotelScan to check prices on stays in Hobbiton.  Or Wonderland!

Harry Potter fans might have liked the news that Hogwarts is now accepting applications.

John Urban was the first to break the exciting news to us all that eReaders are now available for our cars — and for only $129!  What a bargain.  And as I’m already an expert drive-and-texter, this can only end well for everyone.

I bet I’m missed some!  Share other bookish pranks in the comments.