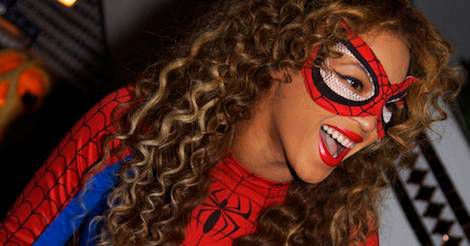 I’m always looking forward to October and Halloween. While I personally don’t need a holiday to gorge on candy and dress in a costume, it’s fun when everyone else joins in. Something I am not looking forward to this year however are the amount of politically inspired costumes I fear are on the horizon. I consoled myself by eating the supply of candy we had for trick-or-treaters and looking up past celebrity costumes inspired by comic book characters. It instantly made me feel better so I thought I’d share my favorite celebrities in comic book costumes.

Not only did Alyssa Milano and her superhero family have awesome costumes but she later tweeted a photo of herself as Wonder Woman breastfeeding to #normalizebreastfeeding.

Trick or treat from Batgirl, Wonder Woman, Batman, The Flash, and Green Lantern!

If anyone can pull off the Hulk costume without needing padding it’s Dwayne Johnson.

Zooey Deschanel as Batgirl is pretty perfect. (I like to imagine this as Zooey as Jess as Batgirl.)

Patton Oswalt very intelligently used his connections for this impressive costume–although I’m pretty sure doorways were his enemy.

This was posted on i.am.beyoncé without any information so I’m not sure what it’s from but I honestly don’t care because this one photo makes it official that Beyoncé is Spider-man–and the only one.

In 2014 Rihanna and friends brought the TMNTs to life and it was awesome! More pics here.

Poppy Delevingne as Harley Quinn at the 2015 UNICEF Halloween Ball–here’s hoping she didn’t go Beyoncé bat-swinging happy after the party.

Jesse Tyler Ferguson and husband Justin Mikita are adorable as Batman and Robin.