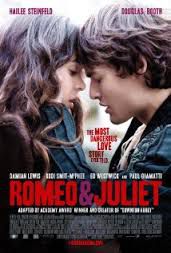 In the most recent film adaptation of Romeo and Juliet, IMDb lists writers as Julian Fellowes (of Downton Abbey fame) and William Shakespeare (of, you know, just regular fame). Which looks strange. It’s an even stranger experience watching the movie and seeing how Fellowes “co-wrote” with Shakespeare.

I didn’t realize just how much of this play I had committed to memory until I heard Fellowes’ language come out of the Capulets’ and Montagues’ mouths. The script is a half-hearted attempt to modernize the 400-year-old language. Sometimes “hath” becomes “have”, “thou” becomes”you.” Sometimes speeches are simplified, even de-iambic-pentameter-ified. I say half-hearted because the edits are sporadic and seem to be done without rhyme or reason. It would be one thing if ALL the language was modernized (I don’t think it would be a GOOD thing, but it would be ONE thing), but that’s not what’s happening here. Fellowes seems to have pinned the play’s pages to a wall and thrown darts, changing language wherever the points stuck. Seriously, the changes make about THAT much sense.

Also, in an adaptation that strives for historical accuracy in all other elements (the costumes are Renaissance, the film was shot on location in Italy), why modernize the language? You’ve committed to doing a Renaissance-era Romeo and Juliet, you’re not pulling a Baz Luhrman or a Joss Whedon and setting it modern-day, and even Luhrman and Whedon kept the language original. Edited? Sure. Outright changed? No.

Then, of course, there are lines uttered in this film that Shakespeare never wrote. Two examples: In the film, Romeo tells his beloved “Juliet, if your heart like mine is full, then tell the joy that awaits us this night,” and then later, when he kills Tybalt, he says “What have I done but murdered my tomorrow?” I can’t tell if this is an equal or worse offense than modernizing the language. These lines just feel so SAD to me. They fall so short of the sparkle and wit of the original text. It’s such watered-down, whatever Shakespeare. And unfortunately, watered-down, whatever Shakespeare is the name of this adaptation’s game. There was a lot left to be desired in the acting and directing, and unfortunately, I think this came from the neither-here-nor-there script.

Fellowes adamantly defends his co-authorship. Below, his explanation:

“When people say we should have filmed the original, I don’t attack them for that point of view, but to see the original in its absolutely unchanged form, you require a kind of Shakespearian scholarship and you need to understand the language and analyse it and so on…I can do that because I had a very expensive education, I went to Cambridge. Not everyone did that and there are plenty of perfectly intelligent people out there who have not been trained in Shakespeare’s language choices.”

“We wanted [a wider group] to enjoy a version of Romeo and Juliet much more than they would expect to. That was our goal, to allow them to enjoy the great beauty of the speeches, but at the same time to tell the story in a way they could follow and wouldn’t feel alienated or left out.”

I don’t buy this defense. Shakespeare is not Breaking Bad and The Avengers, but it is by no means indecipherable. You don’t need to have attended Cambridge to understand this story. Freshmen in high school read Romeo and Juliet. Prison inmates perform Shakespeare. The Bard wrote for kings and peasants in his day, and it is a testament to Shakespeare that his plays STILL WORK for the kings and peasants of today. That Fellowes assumes such a narrow slice of society can appreciate Shakespeare makes me suspect that the adaptor really didn’t do his homework. If this was the method behind this adaptation’s madness, then this adaptation was made under false pretenses. This was a film that seems to have been done for the wrong reasons.

It doesn’t make the film better to lose its haths and thous. It doesn’t make the characters more relatable, the story easier to follow, the tragedy at the end that more tragic. It saps the poetry out of the piece. And the poetry in this piece is EVERYTHING. Even if you don’t understand why biting your thumb at someone is such a terrible thing or why Queen Mab gets her own monologue, those momentary confusions are worth it if the exchange is the transcendent experience of hearing Shakespeare’s language as he intended you to hear it.

Is there a way to successfully co-write with Shakespeare? I’m not sure, I don’t think so, but I don’t know. However, what I do know is that the only way to accomplish this Herculean feat would be to adapt with a combination of intelligence, courage, and care that this film lacked in spades.