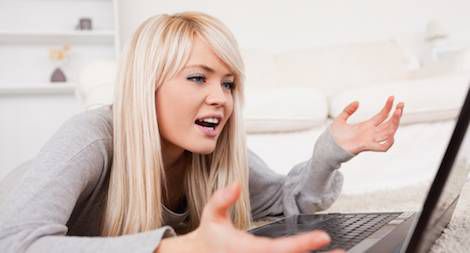 This is an old bone, but I’m going to chew on it some more because the public perception of romance novels is a perpetual source of irritation in my life. As a general rule, I try not to spend all my time defending the genre from the fifty-million polemics written about romance novels each year (which seem to spring up faster than dandelions in the spring). If we waste our energy shooting down shallow, unsubstantiated arguments, then we have no time left to devote to real consideration of the genre (its flaws, its value, its sociocritical commentary, etc.). Which, of course, is what they want.

Today, however, I’m going to make an exception.

Because back in June there was an article in the National Post that really hit the wrong note with me—so much so that, rather than fire off the rage-fueled response I wrote that same day, I have been sitting on this post for two months. I’ve been hesitating for two reasons: one, rage is not a good look for my writing style, and two, the issue I have with the article itself is a point of massive frustration for me both personally and professionally. I wanted to be sure that when I finally wrote this post, I was able to clearly articulate why.

But right off the bat, let’s get one thing clear:

Dear Romance Detractors of the World,

THE ROMANCE GENRE IS NOT YOUR JUNK FOOD.

Sincerely,
We’re all really tired of this argument.

Sadaf Ahsan’s article, “In Defense of the Trashy Summer Read,” ran in the National Post on June 27, 2018. After months of fairly decent media coverage for the genre—this year has been an amazing one for positive representation of the romance novel in the media—I was hopeful that, despite the use of “trashy” in the title, Ahsan’s piece would, in fact, be a defense of the romance.

But Ahsan quickly disabused me of that notion. She begins the article by asking us to “redefine how we think of trash”—not to redefine what we think of as trash, but what we think of trash. Not an auspicious start, since she is clearly still associating romance with “trash.” But, thankfully, the word trash, through annoying, has been used so often with regards to the romance genre that it’s really lost most of its power. So, though annoying, Ahasan’s ability to distinguish between trash and quality wasn’t enough to set me off. No, it was when she compared romance novels to junk food that I really lost my temper.

So I have decided that it’s time for a Romance Novels 101 refresher course.

Lesson 1: Romance novels Are Not Trash

To explain why Ahsan comparing romance novels to junk food set me off, I have to back up a few years.

In 2015 the Smithsonian ran an article by Emma Pearse on their magazine website, “Why Can’t the Romance Genre Get Any Love,” about the academic study of the romance genre. In the article, Pearse makes the argument that romance novels have as much literary merit, and are as worthy of academic study, as any other piece of fiction, from Tolkien to Tolstoy. She draws particular attention to the fact that most other forms of genre fiction, in particular fantasy and science fiction, have been studied in universities and taught in classes for years. But romance has not been afforded the same degree of attention, time, or effort.

But at the end of the day, the main reason that romance novels are dismissed as fluff and nonsense is because they’re (mostly) written by women, and when has something created by women for women (and about women or centered on women) not been automatically been dismissed out of hand?

But the more you try to explain to them that romance novels have value—literary value, cultural value, critical value—the discussion becomes a Magic Eight Ball of Ignorance (-5 to Intelligence). Every time you make a rational argument and shake the ball, the words “mindless brain candy” keep floating to the surface.

Lesson 2: Romance Novels Are Not Junk Food (or Fast Food)

If you want an example of a typical response from the Magic Eight Ball of Ignorance, check out this early comment on Pearse’s article:

This guy pissed me off in 2015 when he claimed that romance novels were of no more consideration to thinking people than fast food was to food critics. And when I saw Ahsan making the same argument in her article earlier this year, I had to resist the urge to set fire to my laptop. Because of all the arguments against the romance genre, this is the one that I hate the most.

Below is the third paragraph of Ahsan’s article, in which she introduces her “junk food” metaphor. Which she then carries through the entirety of her article, as though she’d discovered the most fucking clever rhetoric trick known to man. (Reader, she had not.)

“Because the thing is, trash – mostly as it pertains to pop culture – is a lovely thing. And the very best, the most vacuous and lighthearted, is deliciously digestible. Like devouring a brightly coloured cupcake or the jelly donut you know isn’t going to offer you anything more than needless calories and a sugar migraine, devouring a trashy novel is the utmost not-giving-a-damn-that-literature is able to offer.”

This paragraph exemplifies everything I hate about the faulty comparison of romance = fast food/junk food. There are dozens of things in Ahsan’s article that I could tear into that are wrong, ugly, idiotically stereotypical, and just plain ignorant—if only I had the time. But this right here is the worst of it. When she follows this paragraph up with remarks like:

“they go down easy, but fast, one after the other, like beers you’ve been tossing back all afternoon, or that bowl of guac you may or may not have finished all on your own. What’s one more drink; one more chip; one more prurient paragraph?”

Ahsan illustrates exactly why this sort of argument makes me so angry. For one thing, it is much too easy for someone to spin it in a way that sounds positive even while the undertone is derisive. Like I said, going into Ahsan’s piece I had hopes that it would be pro-romance, given the title. And on the surface it seems to be. Read romances, Ahsan says! Don’t let anyone shame you for reading romances! These are arguments real romance readers make everyday to encourage each other and to embolden new readers.

The difference is that when actual romance readers say these things we mean “read romances” and “don’t let people shame you for reading romances” because. The “because” being that romances are amazing, creative, ever diversifying, feminist, and (naysayers and literary gatekeepers be damned) possess amazing literary value. When Ahsan says “read romances,” etc., it’s not “because,” it’s “but.” Read romances, but never forget that they’re bad for you and to supplement your romance reading with real books.

Fun fact: the definition of prurient is “marked by or arousing an immoderate or unwholesome interest or desire; especially: marked by, arousing, or appealing to sexual desire.”

Excessive. As in, you should be ashamed of the degree of interest. This word has a explicitly negative connotation, and you will never convince me Ahsan didn’t know that.

And that’s the ugliness of the “junk food” metaphor. It encourages you to “indulge,” but it never wants you to forget that it considers what you’re consuming to be bad for you, and ultimately it looks down on you for your choices. This sort of thinking is tied into a long history of people dismissing the romance genre as useless, valueless, ineffectual literature, even as they oppose that same argument by claiming romance novels are harmful to women. (See above re: the vein in my forehead and the idiotic idea that romance novels blind women to reality.)

That’s right, women are so stupid and unaware that we can be tricked by a piece of fiction. Did you know that? I didn’t. Must be because I’ve been reading too many books to pay attention. We’re so incapable that we have to be told what we can’t read, what we can read, and how much of one thing we can read before it warps our simple little minds. Now smile, pretty girl, and say thank you! But, then, pretty might be the wrong word to use, because based on the awful romance reader stereotypes that Ahsan evokes in her article (apparently we’re all sloppy, lazy, lonely, cat-owning, sex-obsessed spinsters, btw), I doubt the average asshole romance hater would consider us all that attractive.

Apparently even two months later I haven’t gotten all the rage out.

So, before I go find something to bring my blood pressure back down out of the stratosphere, one last time for the people in the back:

ROMANCE NOVELS ARE NOT YOUR JUNK FOOD.