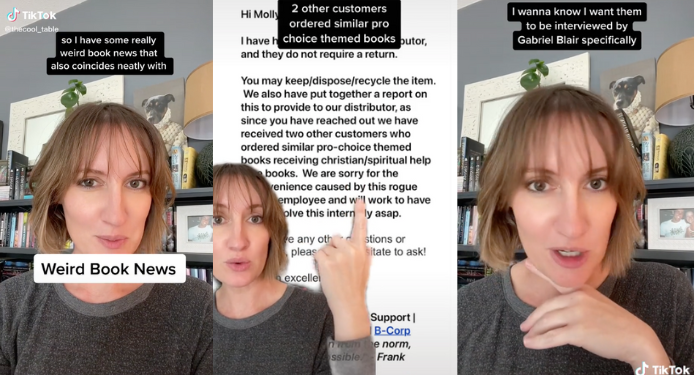 Gabrielle Blair is the author of Ejaculate Responsibly, a new book out this week described as “moving the abortion debate away from controlling and legislating women’s bodies and instead directs the focus on men’s lack of accountability in preventing unwanted pregnancies.”

On October 13th, she tweeted about some “book drama” happening around this title: several customers who had pre-ordered the book through Bookshop.org received something different in the mail: books from Focus on the Family, a Christian anti-choice organization.

Bookshop.org replied to the customers who received these books incorrectly that this had happened several times, and that the error traces back to the warehouse/distributor, Ingram. Ingram is one of the largest book distributors in the U.S., supplying over 40,000 retailers with titles, including Barnes and Noble and many independent bookstores.

According to the Bookshop.org email, a “rogue Ingram employee” was responsible for swapping orders for Blair’s book with religious tracts, and that they are currently working with Ingram to solve this issue.

…And that’s the Weird Book News of the day.