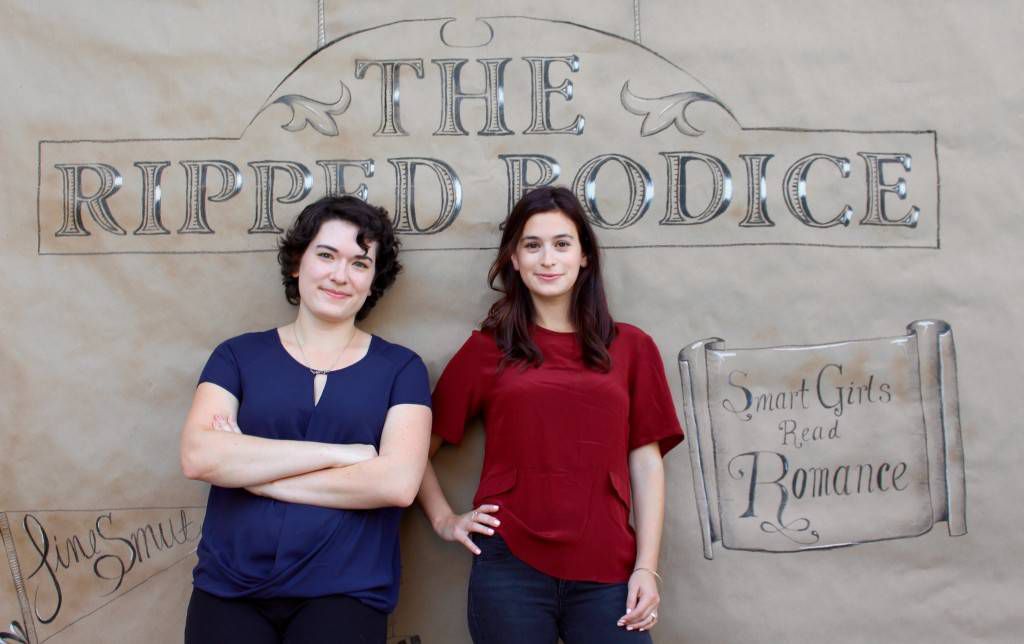 Romance publishing has a serious diversity problem and we now have the data to prove it. Readers of the genre know the challenge that finding traditionally published romances by authors of color can be. However, up to this point, there hasn’t been actual data on the issue. Enter the lovely ladies of The Ripped Bodice, the only romance specialty store in the country. Bea and Leah Koch crunched the numbers and published their first “The State of Racial Diversity in Romance Publishing” report, based on 2016 new releases. It’s pretty startling stuff. The report looks at racial disparities in mainstream romance publishing and is accompanied by some pretty rad infographics to show readers just how completely horrifying their results were.

The Koch sisters say that they became “increasingly aware” of the problem of racial disparity in romance publishing through their interactions with customers of The Ripped Bodice. People were coming into the store looking for books by authors of color that were traditionally published, but Bea and Leah were running low on suggestions.

“We have found it difficult to continue the conversation about diversity in romance without hard data,” says report co-author Leah Koch. “For many years the common refrain from publishers has been ‘we’re working on it.’ Every year we will track industry growth and see if that promise rings true.”

“Honestly we were shocked at how abysmal the numbers are,” says Bea Koch. “We thought they would be bad, [but] we didn’t think they would be this bad.”

Twenty publishers were invited to participate in the process. More than half of those invited actively engaged in the process and contributed statistics and information on racial diversity for the study. For the publishers who did not submit data, Bea and Leah gathered release information from publishing websites and catalogs and then researched the authors of those titles to determine what books were actually written by people of color. Publishers that participated were: Carina Press, Crimson Romance, Dreamspinner, Entangled, Harlequin Series, HQN, Kensington, Mira, Riptide, Sourcebooks, and St. Martin’s Press.

All graphics courtesy of The Ripped Bodice.

The Koch sisters acknowledge that their process wasn’t foolproof. Would it be helpful to have data on other underrepresented areas of the genre? Sure! This report gives the larger romance community something to build on, though.

“While many groups are still woefully underrepresented in the romance genre, including people with disabilities, marginalized religious groups, and members of the LGBTQ community, we had to start somewhere. This is a difficult subject to discuss, but racial discrimination is one of the largest barriers to equality in any professional industry. Publishing is not immune.”

As a romance reader, I’m glad to know we are all concerned about the lack of racial diversity within the genre. Although I wasn’t surprised by the results of this report, it was pretty staggering to see the data in graphic format. Let’s take a moment to soak in the full data:

Before the genre can work on removing barriers we all have to admit they exist. This report acknowledges the barriers that many in Romancelandia have always presumed were present. Today, the data on the lack of romance authors of color being published by traditional means has entered the conversation, and I, for one, am all ears. I plan to buy more books from authors of color in order to renew my commitment to the racial diversity of the genre and I plan to buy more Kensington romances because, hot dang, their numbers look amazing!

“It’s too important. We have to start with laying out the facts. This is the genre we love and have devoted our lives to. We all need to do better. The traditional romance publishing industry is going to collapse if it doesn’t start hiring authors that reflect the current U.S. population. We’re hopeful that by contributing this data to the discussion, we will start to see real change.”

Mad props to Bea and Leah on their unwavering quest for data. It’s pretty amazing that they not only took this project on but that they compiled the results with such aplomb while running a successful bookshop. I can barely find enough time to read, much less even think about tackling a big project like this.

What say you? Anything in the report about racial diversity in romance surprise you? Where do you think the romance community should go from here?