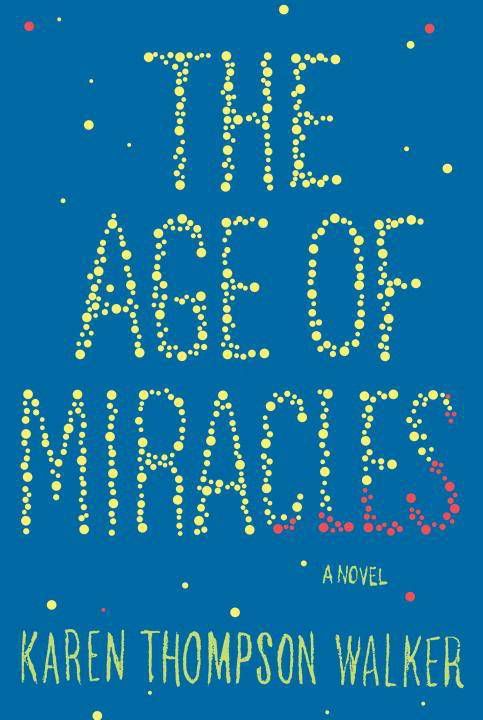 I don’t know where to begin with Karen Thompson Walker’s debut novel The Age of Miracles. First, it was fantastic — sweet and sad and super-fascinating. It takes place in California of the near-future, where the Earth’s rotation gets wonky and minutes are pouring into each day. They call it the slowing, and people lose their ever-loving minds. While the governments and scientists and grown-ups try to figure out what to do, eleven-going-on-twelve-year-old Julia just wants to sit next to hottie-skateboarder Seth on the bus and figure out why her BFF decided that forever was too long to be best friends. It’s coming of age meets the apocalypse and it’s absolutely wonderful.

Fifteen-year-old Morwenna Phelps’ twin sister is dead, her mother is possibly a witch, she has just met her father for the first time, and she’s being shipped off to a boarding school where she looks and feels like a total outsider. Lucky for Mori, she has books! Loads of science fiction and fantasy books, to be precise. Thanks to a kind librarian (Mori declares interlibrary loan to be “a wonder of the world and a glory of civilization”) and the sci-fi-loving friends she makes at a local bookshop, Mori discovers that the magic of literature extends into the real world when one is among others who share her passion. Sci-fi and fantasy fans will love the myriad allusions and inside jokes, but you need not get them all to enjoy the book (and my love for it is proof). Among Others is a gorgeous book, full of heart, and anyone who’s ever sought refuge in reading will see him or herself in Mori’s journey.

First I would like to give a nod to Jodi’s choice of The Age of Miracles. I love that book. And now – let’s talk war. The Iraq War, to be specific. Billy Lynn is enlisted in the army, and he and the rest of his squad are involved in a battle that happens to be captured by a Fox News cameraman and broadcast into homes across America. Suddenly, the squad is thrust into the limelight and whisked to the States to be paraded around by the government in an attempt to bolster people’s opinion of the war in the polls. But Billy Lynn isn’t sure he’s a hero. The whole book is told from his perspective as the squad attends a Dallas Cowboys game on Thanksgiving Day. This book is funny and smart, and wonderfully written. It’s very – I keep wanting to say contemporary, but that’s a stupid way to describe a book, but…yeah. Contemporary. I love this book. Two furry paws way up!

In the beautiful and sparse tradition of Louise Erdrich and Cormac McCarthy, Alyson Hagy delivers a novel that is short on punctuation and long on emotion. Will Testerman is as conflicted a character I’ve ever read, but his conflict is so quiet you almost miss the intricacies of his ambition, guilt and goodness. Hagy is truly a poet, and it is completely a book you want to savor. While I spent most of the book wondering how it would all end, I enjoyed immensely the journey to get there. As for the novel’s conclusion, I’m haunted by it, even several books later, and that to me is a mark of a successful author.

The Darlings by Cristina Alger

In trying to decide my favorite novel of the month, it was between The Darlings, and John Irving’s new book, In One Person. The Darlings won — and since I’m a huge Irving fan, that should tell you how good it is. It’s the story of a wealthy New York City family on the brink of crisis — both personal and financial. It examines the age-old questions of where loyalties should lie: to family, or to the truth. If you enjoy a good timely “financial thriller,” this is for you!

Dust to Dust by Benjamin Busch

If Dust to Dust by Benjamin Busch isn’t the oddest memoir I’ve ever read, it’s certainly in the Top 10. It also tops the heap of best books I’ve read so far this year (it’s a smallish heap, but it’s growing with every new book I pick up). Busch is the son of novelist Frederick Busch, was a cast member of the HBO series The Wire (Officer Anthony Colicchio), and served two combat tours in Iraq as a Marine. That’s enough for three books right there, but Dust to Dust melts everything down to something else entirely. Each page is packed tight with sentences that would be right at home in the stanzas of a poem. Busch doesn’t take a linear, chronological approach to his life; instead he loops through the helix of memory–stories of building a snow fort as a child are followed by a battle scene where the air is “sliced with bullets,” which gives way to a lyrical passage about the impermeability of rocks. You know how film trailers cut and splice and thoroughly mess with the timeline of the movie’s story? That’s how Busch approaches his autobiography. It’s taken me all month to finish Dust to Dust, but that’s okay–it’s a book that demands a slow read as I piece together a closely-examined life.

Full Body Burden is Kristen Iversen’s narrative nonfiction account of her life growing up in the shadow of a secret nuclear weapons plant outside Denver, Rocky Flats — a producer of plutonium bomb components that was at one time identified as the most contaminated site in the United States. As a skeptic turned investigator turned critic of Rocky Flats, Iversen is an almost ideal narrator for this tale of idealistic dreamers, inattentive government officials, and criminally negligent corporations. Full Body Burden was alternately fascinating, rage-inducing, funny, and melancholy within a single chapter. I think it will end up being one of the most important books I read this year. (This NPR interview with Iversen gives a much more thorough overview of the book, if you’re curious to read more before picking it up).

The Green Shore by Natalie Bakopoulous

I’m shamefully ignorant of Greek history (past D’Aulaire’s Book of Greek Myths), so this novel opened up many doors and avenues for me. It’s set during the 1967 military coup and follows the members of an extended family as they navigate political and emotional tumult. There’s the leftist student, the disillusioned mother, the young daughter trying to grasp what’s happening… The everyday details and concerns give an immediacy and poignancy to the confusion and sweeping events. (Where did she drop her purse when fleeing from soldiers?) As do the ways characters turn to ordinary habits for comfort (taking a bath, sitting around a kitchen table), when normal life starts to ominously erode.

Leviathan’s Wake and Caliban’s War (The Expanse) by James S. A. Corey

In the wake of some cerebral and ambitious science fiction from the likes of David Brin, Kim Stanley Robinson and even Ridley Scott, I’d like to recommend a smattering of space opera that isn’t quite so heady. “The Expanse” saga arrives with its feet planted firmly on the ground, albeit through the use of magnetic boots. And, okay, the ground isn’t terra firma so much as the grimy corridors of  multi-tiered slum colonies erected on gravity-equipped asteroids. But far-flung and thoughtful as it all is, there’s a meat and potatoes appeal to Leviathan Wakes and its hot-off-the-presses sequel Caliban’s War that make them perfect yarns for your next romp in the sand reading session. Writing under the pen name James S. A. Corey, fantasist Daniel Abraham and Ty Franck (assistant to George R. R. Martin) have developed a robust frontier world, rife with conflict, both cosmic and street level. Chapters alternate between third person perspectives, shifting from Jim Holden and his ragtag crew of space truckers to a Rick Deckard-esque detective named Miller as he attempts to track a missing woman. Check in for the thrilling and detailed space battles, but you’ll stick around for the grand world-building, deep political intrigue and smart prose.

Budo is one of the most interesting narrators that I have come across in a long time. Perhaps it is because he is not human. He is the imaginary friend of a boy named Max, a boy who is not like the other children in the third grade. Max lives “inside” himself, and he does not like other people.  Budo looks after him, making the hard stuff a little easier. He is wiser than the average imaginary friend, and he is braver, too. He is not the perfect narrator, but he is honest and sincere. It’s been a long time since I’ve read a story with this much heart. The book starts out a little on the odd side, but, believe me, it comes together at the end. The destination is well worth the journey.

Publisher Europa Editions is generally a safe bet when it comes to great translations, but this novel was exceptionally awesome. Everyone’s calling Gamboa an heir to Marquez, and while they may be totally different in style, that’s definitely the level that Gamboa is playing on.

The Odyssey by Homer

Is this cheating? I feel like I’m cheating by using one of the foundational pieces of literature. Oh, well! The Odyssey has everything you could ever want: beautiful language, an unreliable narrator/main character, EPIC ADVENTURES, family (and women who move the plot forward), SCARY BADDIES, fate v. free will, justice v. vengeance, grown men crying. Women turning men into pigs. You know. The usual. Everything you read after this will just be a re-telling of a part of this.

The Pillars of Hercules by Paul Theroux

Reading old travel books is fun. It is like getting a postcard from a ghost. Theroux’s grumpy 1995 travelogue around the circumference of the Mediterranean reads like a dispatch that has been lost in the post for a lot longer than 17 years. He is spookily prescient about why Greece’s membership of the EU is A Bad Idea, while his travels through the Balkans – all starving refugees, terrified children, shell-holes and blocked borders – is unrecognisable to the family-friendly set of nations that hug the Adriatic today. The Middle East, however, is still reassuringly screwed up when Theroux visits. Plus ca change, as they say on many of the overrated shores he visits.

I would feel embarrassed about picking this since it’s such a classic, but if I have only just read it then surely there are those of you out there who haven’t been formally introduced to Mattie Ross. Here, let me do the honors. She’s the sharpest Arkansan 14-year-old who’s ever run off to see justice done. Her father’s been killed by a hired hand, who turns out to be wanted in several states — and she’ll see the culprit hanged in person, thank you very much. It’s impossible not to be charmed by her moxie and her forthright, take-no-prisoners personality. The shenanigans range from hilarious to edge-of-the-seat, and I can pretty much guarantee that by the end you’ll want to read everything Portis has ever written.

Your turn, readers. Best book you read in June?