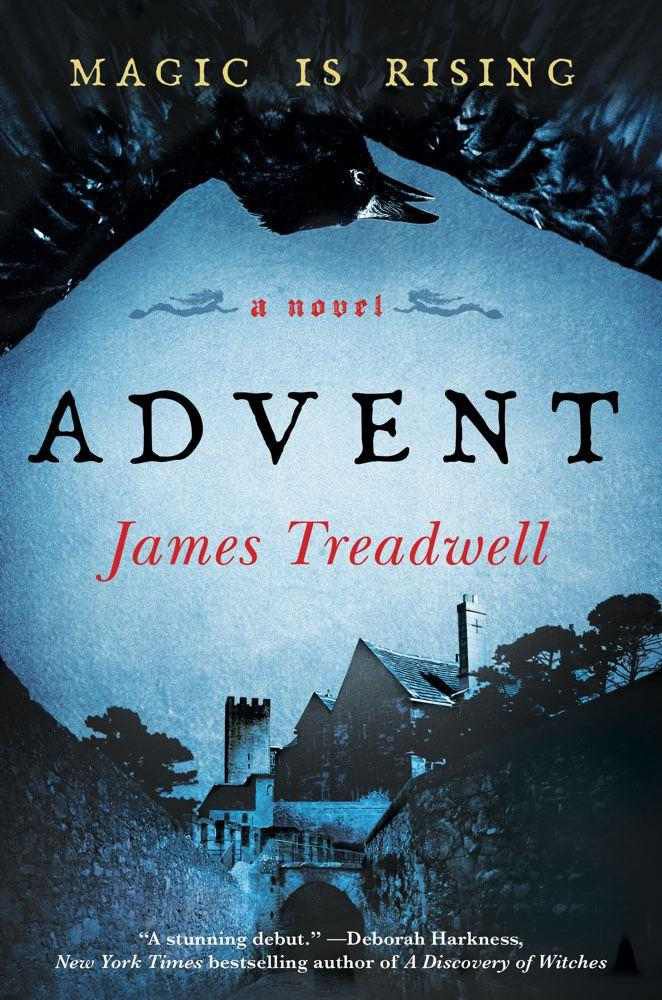 A choice beyond tough, but this month I’ll go with the book the delighted me most: Advent by James Treadwell, from Emily Bestler Books/Atria. It’s book one of a trilogy, and convinced me that I am still not “up to here” with books about adolescents, magic, and battles between good and evil.

I read painfully slowly, especially when compared to my more bookivorous friends, so I’ve spent a bulk of July reading the same book, Nick Harkaway’s Angelmaker. “But, Ali, if you only read one book this month, how can you say it’s the best? There’s nothing to compare it to,” is probably what you’re thinking. To which I say, “This is pretty much the best book EVAR!!!” Hyperbole aside, I have not been in love with a book the way I’m in love with Angelmaker in a long time. This is the Real Thing. I just want to curl up and live inside this book forever. I mean, there’s swashbuckling and spies, bees and automata, gangsters and supervillains, and Women of Consequence. Oh, the Women of Consequence! I love every single one of the characters Harkaway has created, even the ones I love to hate. Even London itself feels more like a character than simply a setting. The whole book just buzzes with life, and I simply adore it to pieces. To steal Liberty’s recap: *MUPPET ARMS*.

The Antagonist by Lynn Coady

A former teenage thug confronts the novelist who borrowed his life experience for fiction, and in so doing uncovers the reasons that underlie the choices we all make. Funny and arresting, and occasionally very very uncomfortable, this is Coady at her best since her groundbreaking Strange Heaven.

Lauren Groff’s Arcadia is not just the best book I’ve read this month, it’s the best book I’ve read, well, in some long arbitrary length of time. It’s brilliant. Beautiful. Moving. Absorbing. And any other adjective that describes the best books and the reasons we love to read. The story follows Bit, a kind of wimpy kid born in a Hippie commune called Arcadia in upstate New York, through his whole life — his loves, his losses, and his long-standing relationships forged during his unusual youth. This is an absolute must-read. Do it now!

The Best of Roald Dahl

Was browsing in a bookstore with a dear friend and when she discovered I’d never read this collection of Dahl’s stories, she swooped in and treated me to it. Haven’t slept the same since. After reading “Pig,” I passed up at least six opportunities to eat delicious pork. (My friend and I have debated since which are the scariest, most unsettling tales… for me, even “Pig” can’t outdo the shuddery, wonderfully horrific description of the ratman who puts a rat and a ferret inside his shirt for a bloody deathmatch.) There’s the sexual humiliation of “The Great Switcheroo.” But just when you start feeling queasy, there’s the pleasure of Uncle Oswald in “The Visitor,” the kind of dashing, globetrotting, impeccably elegant womanizer we all wish we had in our family. He plays Verdi while driving a Lagonda through Egypt after seducing a woman atop a pyramid! And there’s the pheasant-stuffed adventure of the “Champion of the World.” All brilliant, but thank god I didn’t get ahold of this when I was under twelve.

I was going to mountaintop-shout my love for Shine Shine Shine, too….but Liberty said it all, and then some (below). So, the OTHER great book I read in July was Billy Lynn’s Long Halftime Walk by Ben Fountain. It’s a book that will give you road rash, make you break out in hives and give you coughing fits of laughter and outrage. Simply put, this novel is the sharp pin to the over-inflated balloon of our national hubris. The book follows the titular Specialist Billy Lynn and his fellow Bravo Squad members on the final day of their Victory Tour on which the Army has sent them after they emerged heroes from a fierce firefight in Iraq. Billy and the others are to be featured in a bombastic Super Bowl halftime show starring Destiny’s Child. In the hours leading up to event, the soldiers meet with the Dallas Cowboys football team, are given a VIP tour of the team owner’s luxury suite overlooking the field, get cozy with the cheerleaders, and negotiate a movie deal about “the battle of Al-Ansakar Canal.” It’s a big crazy parade of pop-culture satire, and it never stops firing on all cylinders. This is a book about the Iraq War in only a sidelong-glance sort of way; mostly, it’s about hypocrisy and patriotism and the blurry line between the two.

You might think you’ve seen the best of the linked-short-stories trend, but you have not until you’ve read this dazzling collection. That’s right, it’s so good, it made me bust out the uber-cliché book critic buzzwords. Schappell explores the complexities of women’s relationships–with their mothers, their fathers, their sisters, their lovers, their children, their friends, their work, and their bodies–and the tiny but un-ignorable acts of compassion and cruelty that can change and define their lives. Hilarious at points but more often grab-a-Kleenex moving, Blueprints for Building Better Girls is one of those books that holds up a mirror and makes you take a good long look. It’ll probably make you do the ugly cry, but you’ll be too overwhelmed by its beauty to mind.

The O’Briens by Peter Behrens

The fact that I’m not even finished with this book and its topping my list for the month speaks very highly of Behrens’ amazing storytelling ability. This is totally in my historical fiction sweet spot; starting just before the turn of the 20th century in the backwoods of Canada, the book works its way forward and ends in 1960. It is a family epic that criss-crosses the borders of Canada on the East Coast, and America on the West, and manages to be everything you want a family epic to be that covers all the major historical events of the early 20th century without feeling stale and overdone. Maybe it’s the Canadian element, but this book feels new and shiny but also lived in and comfortable. Excellent characters, excellent plot, and the narrative structure – with the POV shifting depending on who is best suited for that part of the story – isn’t distracting at all, but rather lends a lot more to the story. I can’t wait to see how this ends.

The New York Review of Books imprint has one of the highest batting averages of any publishing house out there, and they definitely bring it with The Radiance of the King. Set in a pre-World War II Africa, a sort of schlubby British guy, hard up on his luck and full of colonial entitlement, is assisted by a beggar and two rambunctious teens in making his way to offer his services to the king. He moves through an almost hallucinogenic landscape, his pretensions and assumptions ripped away from him, until he is (SPOILER ALERT) eventually sold into slavery as a member of the king’s harem. This isn’t just a classic of African Literature, it’s a Classic, period.

If there was buzz on this book I completely missed it — thank god for coworkers with excellent taste in YA! Seraphina has joined the ranks of favorite heroines who use their brains and aren’t afraid to get their hands dirty (see also Alanna, Katsa, Harimad, Buffy and Hermione). She’s a musical genius with a secret — one that could bring down not only herself but her family at court — which means she needs to stay off the radar and out of the limelight. But when a conflict begins to brew between humans and dragons, she does what she can despite the dangers. Cannot wait for the sequel!

Shadow of Night by Deborah Harkness

This month, I totally hopped on the hype train and read the follow-up to Deborah Harkness’ A Discovery of Witches, titled Shadow of Night. I expected something either completely different from the first book or something that tried too hard to maintain its connection to that story. It was neither. It was a solid continuation of the first story, and I was quite impressed by how well the jumps to the present fit in with Diana and Matthew’s experiences in the past. At times, I felt a bit like I was reading Geraldine Brooks’ The People of the Book – that’s how well it worked. I think it’s definitely worth checking out, but you definitely need to read A Discovery of Witches first.

I realize that there’s nothing I can tell you about Shine Shine Shine by Lydia Netzer that Amanda didn’t already say better back in our May round-up…but I’m going to gush about it anyway. Because I loved it. As Andrew Shaffer says, I Joseph Gordon-Loved It. The book is about Sunny, who is pregnant and bald (go with me here) and left looking after her autistic son and her dying mother while her genius husband Maxon is on a rocketship mission to the moon. It is so unusual and sweet and smart. And it is sad, too. It made me cry, and I hardly ever cry over books. I love it when that happens. It reminded me a little bit of The World According to Garp, especially the character of Emma, Sunny’s strong single mother. To recap: *MUPPET ARMS*. Pick up this book and shine on, you crazy diamonds.

The best (and almost only) book I read this month was James Joyce’s Ulysses. While it’s often a frustrating and even indecipherable work, Joyce’s genius is obvious. It’s so obvious, in fact, that it just might make you look at other authors you think of as geniuses with a new level of meh. I think most of the criticism about Ulysses is true- it is mostly Joyce getting caught up in his own erudition- but that doesn’t make it any less impressive. It’s a masterpiece of modernism, and you should read it if only to stand in awe of all the smarty-pants-ness going on in Joyce’s head. In Latin.

Your turn, readers. What was your best book of July?