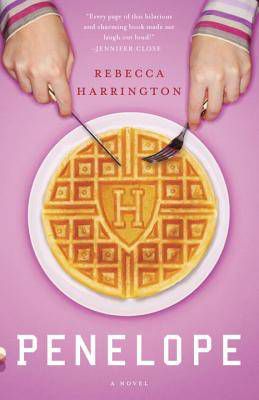 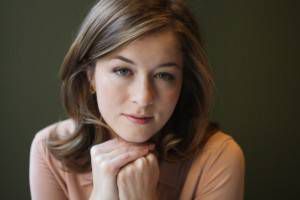 Rebecca Harrington is a twenty-six-year-old writer living in New York City. She currently works at The Huffington Post and studied history and literature at Harvard and journalism at Columbia. Penelope is her first novel, currently out as a Vintage Original paperback.

Book Riot: Which books most inspired Penelope, your tale of an incredibly hapless Harvard first-year undergraduate?

Rebecca Harrington: I was inspired by a set of 1930s campus novels set in Oxford/Cambridge: Decline and Fall, Lucky Jim, Zuleika Dobson, they used Oxbridge in this kind of interesting way, as a microcosm for satirizing their class system. It’s interesting to look at American campus like that, because in American fiction you generally see Transcendentalist view of education–that is, education transforms a person’s life. British fiction of the type I’m talking about gives a gimlet eye on undergraduate institutions.

BR: Hmmm, lots of British novels. Do you think there’s something that the Brits get about the college experience in particular?

RH: The Brits always do it so well, but one American writer who gets it is O’Hara–Appointment in Samarra is a really interesting book about class even if it’s sort of melodramatic at that moment when he throws the drink in the guy’s face. It’s more psychically awful than anything else, but the anger and emotion in O’Hara’s novel rang true.

BR: How about modern British fiction?

RH: Ishiguro is the ultimate master of pretty much of everything and everyone; he’s probably my favorite modern writer. The way he writes about social class, and uses it as an instrument of consciousness, is astonishing. Never Let Me Go mirrors the culture of exceptionalism in boarding schools, those inexplicable things we do because we’ve always done them, one of the most interesting and subtle examinations of

BR: Which books and/or authors do you recommend over and over again?

RH: Buddenbrooks and The Good Soldier.

RH:  The list is endless!  The Good Soldier, A Handful of Dust, everything that Jane Austen ever wrote, Love in a Cold Climate… Decline and Fall was probably the most formative book I ever read in my life because I think his sense of humor is so subtle, his timing is impeccable, his dialogue is really idiomatic even though it almost veers into farce…this quality of the absurd.

BR: Which authors do you count among your greatest influences?

BR: Where and how do you read?

RH: I read a lot on my iPhone while I’m commuting–I was recently reading War and Peace on it! I tend to read three books a week when I’m in a zone, but rarely more than that.

BR: How did you read for writing this novel?

RH: I wanted to develop a character who would be something of a conundrum–Penelope, the one person utterly unable to cope with the abundance of choices available at Harvard. I took a lot from my own experiences at Harvard, but I was more inspired by a line I wrote in a review for The Crimson of a production of Caligula much like the one in my novel. I called the production “mundane and absurd events that propel you towards nothing,” and thought: What if someone’s freshman year were like that? So I read a lot of Crimson reviews, thinking about that style. I wanted to be sure that even when I made stuff up that the way people talked and what they did at least be accurate.

BR: Which book would you take with you on a desert island?

RH: Jane Austen’s juvenalia on a desert island would be so calming!

BR: Is there any book you’re ashamed of not having read?

BR: What is your all-time, number-one, favorite book?

RH: Decline and Fall was probably the most formative book I ever read in my life. I think Waugh’s sense of humor is so subtle, his timing so impeccalbe, and his dialogue really idiomatic, even though it almost veers into farce.

BR: What are you working on now?

RH: I’m not working on anything right now, technically; I’m sort of in the thought phase of a couple of different novels. I get very influenced by genres and forms, so when I write campus a novel, I read a bunch of campus novels; now I’m sort of in that research phase of three different ideas that involve Bleak House, contractual obligations, and comedies of manners. We’ll see what develops!