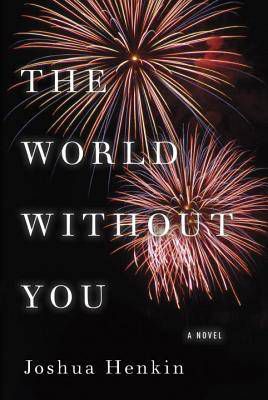 Joshua Henkin is the author of the novels Swimming Across the Hudson (a Los Angeles Times Notable Book) and Matrimony (a New York Times Notable Book). His stories have been published widely, cited for distinction in Best American Short Stories, and broadcast on NPR’s “Selected Shorts.” He directs the MFA Program in Fiction Writing at Brooklyn College. His latest novel, The World Without You (Knopf/Pantheon) has received much critical acclaim.

Joshua Henkin: So I’m reading a lot of things at the same time, including American Rust by Philip Meyer, Goodnight Nebraska by Tom McNeal, and Maile Meloy’s Both Ways Is the Only Way I Like It, and the manuscript of a novel from one of my students. I’m always a few weeks behind on The New Yorker; I knew this guy in Ann Arbor who used to read the New York Times from cover to cover every day, and he was years behind, so I’m a little bit like that. There was a Donald Antrim story from a few weeks ago that was very good, and it reminded me of reading an essay of his about finding a mattress with his girlfriend. Oh, I’m also reading the first of Edward St. Aubyn’s Patrick Melrose series, Never Mind. I don’t always finish things I try. I used to, on principal, but now if I’m halfway through a book and it’s not doing it for me, I stop. However, everything I’m reading so far seems really strong.

JH: I feel like every book I love, I wish I’d written. Madame Bovary, The Great Gatsby, any of Alice Munro’s short stories as well as John Cheever’s journals–as long as I would not have had to live his life! Dubliners. Augie March, Revolutionary Road. I think David Foster Wallace’s essays are tremendous–the one on English grammar and usage in particular.

JH: I like to recommend books that haven’t gotten the attention they deserve, like Tom McNeal’s book To Be Sung Underwater that has a strange, slightly implausible premise. There was a collection of stories from about 25 years ago titled Sweet Talk by Stephanie Vaughan that has recently been reissued with an introduction by Tobias Wolff, which makes me really psyched. Oh, and The Privileges by Jonathan Dee. I think certain books are better for being imperfect, too–those that take risks and do things that surprise you and don’t entirely work but nonetheless make you experience things you wouldn’t otherwise, so even though the Dee may not be flawless, he knows how to write characters, and I’m a character guy. In that novel, character just jumps off of the page at you.

I also often recommend early Jane Smiley novellas, like The Age of Grief, which is devastatingly good in a quiet, heartbreaking way. She’s one of those writers whose books feel dissimilar.

BR: Has a book every disappointed you?

JH: Most books disappoint me, in the sense that I think it’s really hard to write a good novel. In grad school, Richard Ford and Richard Russo both emphasized that “even writing a bad novel is a major accomplishment.” But you know, if it’s hard to write a bad novel, it’s even harder to write a good novel! Most books disappoint, but I keep on reading because it’s worth it for the novels that are great. Even if a novel disappoints, that feeling, for me, is tempered by a kind of humility. I happen to teach grad students; I’ve gotta say, some of them are writing work that blows me away and is better than most published work.

BR: Which book changed your life?

JH: I remember my childhood pretty clearly but I don’t feel there was a book–perhaps E.B. White’s The Trumpet of the Swan?–that changed my life or rocked my world. However, all of the books I read then had a big impact on me as a writer. All the books you read affect you in ways that you often can’t fully figure out. I remember when Ethan Canin’s The Emperor of the Air came out and I read one of the stories in it, “The Year of Getting to Know Us” and thought: Oh! I’d like to do that, too.

My first writing instructor was Leonard Michaels, and the way he writes about sex and violence was very powerful for me. It took me 10 years to write Matrimony. I re-read Empire Falls by Richard Russo, and there was something about the way he dealt with time in that book that helped me find a way to structure Matrimony so that it opened up and worked.

This Boy’s Life by Tobias Wolff was life changing in terms of my model book as a writer. It is so deeply unwritten you are  unaware of the author. That’s’s how I like to write. It’s not the only way, but it takes a lot of effort to make something seem effortless–you have to be so on top of things in order to disappear!

JH: It’s basically the same–that is, I’m writing all the time. To me, I want to read as widely and deeply as possible. I never understand this anxiety of influence stuff–I feel the opposite! I just don’t buy not being influenced. You  should be influenced, and be influenced by the good writing. When I was in grad school, there was a lass on imitation. People are so concerned about originality, but if you’re good and you have a voice, that will show. There are really only a couple of stories: A stranger comes to town, or someone goes on a trip. The more you read, the more you can riff on those plots. If you’re not a reader, you’re not a writer.