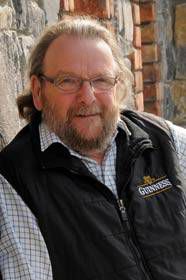 Leap Day comes just once every four years–and since it’s a rare day, too, when author Patrick Taylor visits Brooklyn, it was fitting that last week on February 29th Taylor made his only New York appearance for his latest book, An Irish Country Girl, at the Carroll Gardens Branch of the Brooklyn Public Library. Since we’re all about Brooklyn here at Book Riot, we took the opportunity afterwards to pepper the Irish-born, Canadian-bound writer with our reader-focused “Riot Asks” questions.

BOOK RIOT: What are you reading?

PATRICK TAYLOR: Well, I’m reading Wilbur Smith’s For Those in Peril on the Sea, a paperback thriller, because that’s all I could find at the airport! I just finished reading a collection of Wilkie Collins short stories before that; did you know he even has one about the first woman detective? It’s true! She’s a seamstress waiting for the man she loves to come home from America, and she’s broke–but she tracks down a murderer. Great stuff. I mostly read nonfiction, because if I read vast amounts of fiction I couldn’t write myself, as you see most of the good writers are so much better than me that I get discouraged and start writing in their style. But I did read quite a bit of fiction since for the past two and a half months we’ve been in Tenerife. I’m not a golfer and I’m not the type to sit in the sun, so when I’m on vacation I read.

PT: Without a doubt, A Tale of Two Cities. However, there’s another one, much lesser know: The Citadel by A.J. Cronin. It’s about a young doctor who took a dim view of the Harley Street types who would inject patients with little more than sterile water and charge them a guinea. Cronin was a socialist, you see. He also happened to be a remarkable storyteller.

BR:  Which book do you recommend over and over again?

PT: Whenever someone asks me who is your greatest hero from English literature, I always tell them Stevens the butler from Kazuo Ishiguro’s The Remains of the Day. He’s a man of enormous principle who is totally out of his depth in a new era; it’s a fantastic book. For nonfiction, I’ve several, but I’ll mention The Great Hunger by Cecil Wooden Smith, about the Irish potato famine.

BR:  Who is your ideal reader?

PT: I don’t have an ideal reader; I just chuck ’em out there. I suspect my reading demo is women over 60!

BR:  Who are your greatest influences as a writer?

PT: Shakespeare, the King James Version of the Bible, Somerset Maugham, Graham Green, P.G. Wodehouse, and C.P. Snow. How are those for a start?

PT: I haven’t read Cities for like ten years but I do keep dipping back into it. I always see Sidney Carton as Dirk Bogaards! I go back to Shogun once a year–talk about wonderful storytelling.

BR: Whose book(s) do you most look forward to?

PT: My reading nook is very simple, and includes (because I didn’t build it) a great big unit with a wide-screen TV and a faux-flame fireplace. I have shelves holding things like a photograph of my mother in her wedding dress, my father’s World War II orders, and paintings by my lovely and talented Dorothy.

PT: Over and over...The Da Vinci Code  was absolute nonsense, but given how many people have read and are reading it, I’m clearly wrong.

PT: When I was a medical student, one book confirmed my decision to go into gynecology–Lady Chatterley’s Lover! Well I’m joking, but just a bit. I will say that The Citadel had a real effect on me. My father was a doctor and it was on his bookshelf. I read it when I was 16 and just ready to go to medical college.