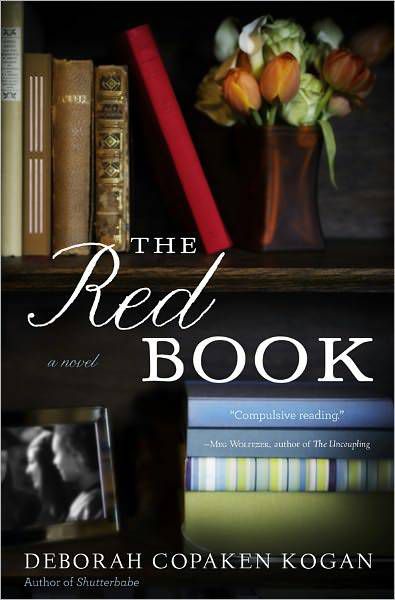 Our second “Riot Asks” reading-centric Q&A features the versatile photographer, memoirist, and fiction writer Deobrah Copaken Kogan, whose newly released The Red Book: A Novel (Hyperion) takes its title from the Harvard College (yes, kiddies, that’s what the undergraduate portion of a university is called) annual class publication. Copaken Kogan’s send-up of her real-life Class of 1988 25th-reunion hijinks actually forms a great backdrop for this interview, because she swooped easily from childhood memories to current events and back to Ivy-League recollections as she discussed the ways reading has influenced her life. For Copaken Kogan, the past is present, perhaps especially when she’s re-reading The Great Gatsby on her iPhone during a daily subway ride…
____________________________
BOOK RIOT: What are you reading?

DEBORAH COPAKEN KOGAN: Right now I am just finishing up When the Air Hits Your Brain: Tales from Neurosurgery by Frank Vertosick, Jr. Brad Reese posted about it on Facebook about a month ago because he’d gotten an early copy from a friend who is also a brain surgeon. It’s totally fascinating! I usually kind of alternate between fiction and nonfiction, but this book I downloaded immediately onto my Kindle because it just came out. It’s such a pleasure; Vertosick went to med school in the first place because he thought he wasn’t smart enough to be a physicist–then he winds up going into neurology because there aren’t any places left in cardiology–that sense of a him as a sort of bumbling Zelig-like outsider persists through the entire book and makes it human. I started reading it on the plane between college visits with my son Jacob. It took me all the way from California to home.

I also just  finished The Class by Erich Segal because while I was writing my book everyone kept telling me, “You should read Erich Segal’s novel about Harvard!” I waited until I was finished! And now, I think I’m gonna write an essay about the reading experience. I mean, his book is a portrait of 1958 written in 1985, and his attitude toward women sort of made me crazy sometimes. There are some really misogynistic moments in the 50s events, some that I don’t even think Segal recognizes as such. Also, most of the Harvard friends and classmates he references became Big and Famous and Noteworthy. Guess what? My Harvard friends and classmates, for the most part, all became ordinary. Is this a difference of temperament? Gender? Both? I don’t know. But I’m going to write about it.

DCK: To the Lighthouse by Virginia Woolf. I read that over and over and over again. When my dad was dying and we were all at our beach house in Delaware, parts of which he had built–well, to be there after his pancreatic cancer diagnosis and reading Lighthouse was unspeakably hard but necessary. I read it again the next summer after he was gone. I can’t imagine life without this book.

BR:  Which book do you recommend over and over again?

DCK: You know, I find Philip Roth’s The Counterlife a really cool book because it really puts you, the reader, on edge. You finish the first chapter and hit the second and think wait, what’s going on? And you go back and re-read the first chapter thinking you’ll figure it out and you don’t and you think “WHAT IS HE DOING TO ME?” Then you hit Chapter Three and realize ooohhhh, now I get it!

BR:  Who are your greatest influences as a writer?

DCK: The cliché ones: Anne Frank, when I was really young, like in third grade. She was just an ordinary girl, writing in a diary, yet look what she produced. She taught me that you didn’t have to be an old woman to write, you could just start writing. You didn’t have to be a quote-unquote writer to writer It was an amazing lesson that I didn’t take in for way too many years, but I did learn it. A few others: Island of the Blue Dolphins hit me in the gut, the first book I can remember that did. The Little House books were very important to me because they led to the excitement of going to the bookstore to buy the entire set, the first time I felt that sort of greed and anticipation with reading. Finally, The Catcher in the Rye. During one teenaged summer with my family in West Harwich, Massachusetts, we frequented two beaches: The Big Beach and the Little Beach. While the rest of Them hit Big Beach, I would sulkily take my towel, all alone, to Little Beach and devour Salinger’s prose.

DCK: I read The Great Gatsby every five years or so. When I was on this trip with my son, visiting colleges, he was reading it, too. I said hey, do you like it? And he responded, I’m not sure yet, I just started. I almost shouted Do you know who you are? You are the luckiest person in the world right now! You’re reading The Great Gatsby for the first time! This led to one of my favorite moments of the trip. We were standing in the security line at the airport and he saw a map of New York that included Long Island. He tried to figure out which of the “bumps” on it were West and East Egg. I didn’t want to burst his bubble…

BR: Whose book(s) do you most look forward to?

DCK: Ian McEwan. Whenever one comes out, I just get very excited by it.

DCK: I read in many places. One is the glider thing you have when your kids are babies. Ours is old and shabby and covered with stains from spit up and such, but it’s in our bedroom and it’s such a soothing reading spot. Another: My iPhone’s Kindle app, whenever I’m on the subway. I think it’s increased my reading tenfold; I’ve read something like 44 books since I downloaded it. It keeps me constantly reading without having to remember to throw a book into my bag or try and fumble it out of my bag when I’m in a crowded car on the A train.

DCK: Probably. But am I going to name names? No, I’m not. Why bother possibly turning off other potential readers of a book just because I didn’t like it?

DCK: Frank McCourt’s Angela’s Ashes. I was reading that at a particular crossroads moment in my life, when I was not liking my job as a producer at Dateline at all. I’d always wanted to be a writer, and I had done lots of writing during my years in public school, but when I got to Harvard there was just one creative-writing course, with Mary Robeson–and I tried to get in twice and was rejected. I thought OK, I’m not a writer. I decided to give up that dream. But then, while working on a team at Dateline, I realized I’m not a good collaborator. I just am not. I’m a perfectionist, and I was not suited for that life. I read McCourt’s book and thought: You know what, here’s this teacher. He finally sat down and look what he made! What could he have done if he’d started sooner? Ultimately, I did not want to be that parent who comes home miserable every day. I wanted to be proud of what I did, what I made. That was 1998, and I was 32 years old. I’ve never looked back–truth.