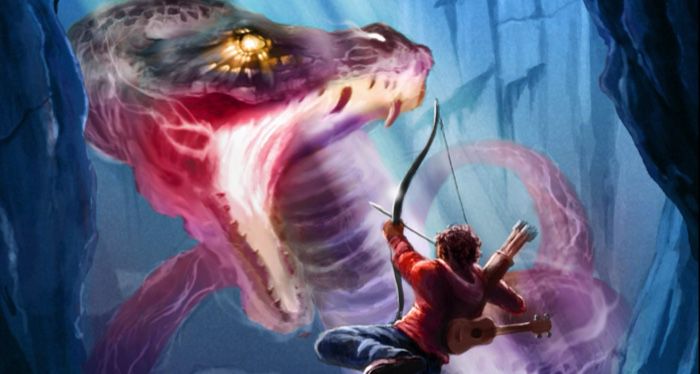 After many, many years and many, many books, Rick Riordan’s Camp Half Blood Chronicles are finally coming to an end. The chronicles began with Percy Jackson and the Lightning Thief, in which our titular 12-year-old learns of his demigod status, arrives at Camp Half Blood for the first time, and must track down Zeus’s stolen lightning bolt. Over the course of five books, readers watched Percy grow into a powerful demigod teenager, taking on titans, navigating labyrinths, and unraveling prophecies. Today, readers are still loyal to Percy (and will soon get to see him the small screen), and all the love for him led to the sprawling universe that will be brought to an end this fall with Rick Riordan’s new book.

Over the years, the chronicles grew to include Roman demigod Jason with The Heroes of Olympus, arriving at Camp Half Blood with his friends but without his memories. It’s through The Heroes of Olympus that the world began to expand immensely as Percy and other fan favorite characters unite with new ones to save the world from all kinds of deadly creatures from Greek and Roman myth.

Riordan’s two other series aren’t technically part of the Camp Half Blood Chronicles but take place in the same fictional universe (and occasionally feature delightful cameos from Percy and his friends). In The Kane Chronicles, we meet the Kane twins Sadie and Carter as they take on Egyptian gods who escape into the modern world. In Magnus Chase and the Gods of Asgard, we meet Magnus Chase who, much like Percy, is dragged into all sorts of world-threatening chaos but centered on the gods and goddesses of Norse mythology.

Currently ongoing is Riordan’s The Trials of Apollo, which features, of course, banished god Apollo. His story concludes this fall with Tower of Nero, expected out on October 6, 2020 (note that this post originally said September 29 and has been updated). It will wrap up the story that began in 2016 with Greek god Apollo banished from Olympus and stripped of his godly powers. Living as Lester Papadopoulos, Apollo has worked to reclaim his powers, returning to his godly form while also becoming more human.

What We Know About The Tower of Nero 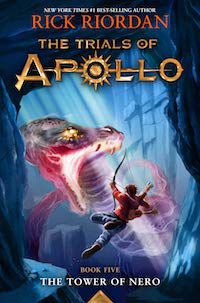 Plot details for Rick Riordan’s new book The Tower of Nero are being kept tightly under wraps, but we know a bit of what to expect in this final book.

After the events of The Tyrant’s Tomb, in which Apollo and Meg returned to Camp Jupiter to face off against Caligula and Commodus, they’re headed back to New York to confront Nero. This is a huge moment not only for Apollo but also Meg, whose difficult journey enduring Nero’s mental and emotional abuse is finally nearing its end.

Apollo will also clash again with Python, who’s reclaimed the caverns of Delphi. (The cover image depicts Apollo meeting his old nemesis again, but Riordan indicates that this image doesn’t necessarily reflect exactly what we’ll see in an Apollo vs. Python match up.) What we don’t know is if Apollo will face Python as Lester Papadopoulos or as a fully powered god once again.

Other familiar faces will put in appearances, including Nico di Angelo and Will Solace, who will play important roles in this book. A few others from Camp Half Blood will also get in on the action (our fingers are crossed for an assist from Percy!)

Tower of Nero isn’t out until September 29, but you can keep up with new books with our New Releases Index, available to Book Riot Insiders. You can sign up today at insiders.bookriot.com and enjoy a host of other bookish goodies with our online book club and more!