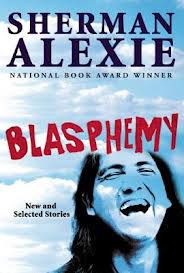 Publisher’s Synopsis: “A bold and irreverent observer of life among Native Americans in the Pacific Northwest, the daring, versatile, funny, and outrageous Alexie show­cases his many talents in Blasphemy, where he unites fifteen beloved classics with fifteen new stories in one sweeping anthology for devoted fans and first-time readers. Included here are some of his most esteemed tales, including “What You Pawn I Will Redeem,” in which a homeless Indian man quests to win back a family heirloom; “This Is What It Means to Say Phoenix, Arizona,” a road-trip morality tale; “The Toughest Indian in the World,” about a night shared between a writer and a hitchhiker; and his most recent, “War Dances,” about a man grappling with sudden hearing loss in the wake of his father’s death. Alexie’s new stories are fresh and quintessential, about donkey basket­ball leagues, lethal wind turbines, a twenty-four hour Asian manicure salon, good and bad marriages, and all species of warriors in America today.

An indispensable Alexie collection, Blasphemy reminds us, on every thrill­ing page, why he is one of our greatest contemporary writers and a true master of the short story.”

Gold Star: “Over the years, Alexie has carved out a space in American literature as the great, tragicomic bard of the modern Native American experience. The stories in “Blasphemy,” written over the course of the last two decades, offer ample proof why.”

Demerit: “Unfortunately, not all of the new pieces are gems…”

Gold Star: “…Alexie hammers away at ever-simmering issues, like racism, addiction, and infidelity, using a no-holds-barred approach and seamlessly shattering the boundary between character and reader.”

Gold Star: “Whether recent or from his earliest period, these pieces show Alexie at his best: as an interpreter and observer, always funny if sometimes angry, and someone, as a cop says of one of his characters, who doesn’t “fit the profile of the neighborhood.””