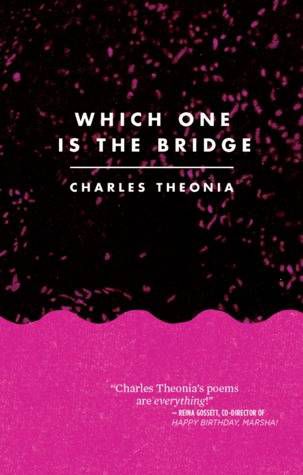 When I received my review copy of Which One is the Bridge, one of two June releases from Heliotrope, the new poetry imprint of Topside Press, I consumed it in one sitting. After finishing it I put it right onto my desk and prepared to start writing the review. For the past month this book has stared at me, a glaring reminder that I had yet to start writing. The trouble is that I couldn’t really pin down what I felt about Charles Theonia’s first book which meant that every time I went to write I ended up watching the neighbors through the window while tapping a pen on my notepad. After some rereading and self-reflection I think I’ve figured out what the issues was: Although I enjoyed reading Which One is the Bridge I only really loved a few of the poems. While I can normally handle nuance and mixed emotions my brain just wasn’t sure how to deal with a collection of poems that I appreciated but which I didn’t feel strongly one way or the other about.

My reading of Which One is the Bridge is that it’s a collection centered around memories. While the poems deal with topics that range from the sweating summers of Brooklyn, the tender moments of relationships, and coming out to loved ones I read them all as memories that Theonia is sharing with us. There’s no denying that Theonia is talented at creating scenes with careful phrasing but as a reader I was constantly aware that the poems that I loved, the ones that I truly connected with, were poems that I was in someway directly related to. Although I was able to enjoy the language throughout the collection the majority of poems felt like I was politely half-listening to a friend tell stories about their friends from high school. Sure I enjoy hearing about that time my friend’s clique stole booze from the store downtown but it’s also a story about people I’ll never meet and honestly it’s a story that I’m not going get super invested in.

The poems that I connected with were the poems that spoke to a year in my life where I wore dark lipstick, made out with a seamstress at a New Year’s Eve party, and drank a fair amount of boxed wine from a metal mug while avoiding my homework. These poems spoke to my love for gold glitter eyeliner and my anxieties about feeling like a gentrifier in places that I consider my home. The one that really resonated with me (After reading it I wrote “nodded so hard i hit my head on the wall” in the margin.) was “Fire Island”, five stanzas about a day at the beaches of Cherry Grove. Although my experiences of swimming in the questionable water around New York City are based in Coney Island Theonia’s depiction of walking into waves and wanting to touch everything they saw reminded me so much of my beloved memories that I wanted to strip off my clothes, drive to New York and jump into the water. This poem also includes one of the best descriptions I’ve read of being reminded that even in spaces carved outside of a cisgender and heterosexual dominated world there are still people who end up excluded and marginalized:

(Later Reina tells me about this same beach,

her sense that only a certain kind of girl

was wanted. I’d felt so easy in myself

Even if I didn’t love Which One is the Bridge the truth is that I’m going to be recommending it left and right because I know plenty of people who will get so much from it. While I may not be the target audience (I think of my myself as “adjacent to the target audience”) I can appreciate that these poems can speak to a population that may struggle to find literature they can relate to: young queer and trans folks who live with crystals in their pockets, ever present cell phones (the poems are rife with emoticons and text messages), open relationships and questions about where they belong. It’s this representation that makes me so excited about Which One is the Bridge and why it’s earned a place on my list of “Books I’ll Buy In Bulk When I Have Lots Of Cash And Then Donate Them To Libraries And To Community Spaces For Other Trans People To Find.”