Do they still have book orders at elementary schools? I hope so.

I guess the internet has extinguished the need for them to a certain extent, but as a bookish kid growing up in a small town (and having spent each summer exhausting the library’s resources), the book fairs and monthly Scholastic book orders — there was a second company that offered book orders too, but I forget their name — were an incredibly exciting resource. My allowance was hoarded for the purpose of book order time.

A few weeks ago, I did a little piece for Book Riot called Retro YA Thriller Throwdown. People seemed to enjoy it, and so I thought it might be time for another one. This one came to me while browsing the book shelves at our local Value Village. I came across two books that I remember ordering in the same book order circa 1990 or so. They were packaged together with a few others in one of the “Grab Bags” they used to offer, where you could get 4 or 5 books of a similar theme at a discount. The theme was “School Daze,” which I found totally hilarious at the time. The books were Louis Sachar’s Sideways Stories from Wayside School — a book about a crazy school that instead of having thirty classrooms on one story, has one classroom on each of thirty stories — and Bruce Coville’s My Teacher Is an Alien — a book about, well, exactly what the title suggests it’s about. And then, just a week or so ago, here they were, at the thrift store, for $1 a piece.

Obviously, I bought them. Obviously, they’re the subject of this week’s throwdown.

Who tells the better whacked-out school story? Sachar or Coville? Again, we’ll have five categories; this time: retro language, use of humour, level of freak, danger zone, and adult obliviousness. To the victor go the spoils.

Coville: The second word in the novel is “Geekoid.” Geekoid!  I mean, come on, that’s just amazing. I also had a “Dorkwad” sighting.

Sachar: Remarkably un-retro in its language.

Round Two: Use of Humour

Coville: Some black humour and some the-school-bully-is-actually-pretty-wimpy yuks, but for the most part the thrills are more scary than funny.

Sachar: Absurdist humour from beginning to end. It’s like Monty Python for fourth-graders. In one chapter, all the students (and the teacher) trade names with delightfully dead-parrot-sketch-like results.

Advantage: Sachar. I’m pretty sure my own whacked out sense of humour is at least partly Sachar’s fault.

Round Three: Level of Freak

Coville: This text freaks one’s freak pretty effectively — there’s a lot of bizarre stuff including an alien teacher keeping a non-alien teacher in suspended animation within a forcefield in his suburban attic. (Incidentally, I am certain this happens more often than we can know.)

Sachar: Thirty different stories offer thirty opportunities to be freaked out, including (but not limited to): a missing nineteenth story and missing nineteenth teacher; a teacher’s ability to turn students into apples; the overwhelming desire dead rats have to sneak into classrooms in raincoats; and the days when two plus two just stop equaling four. 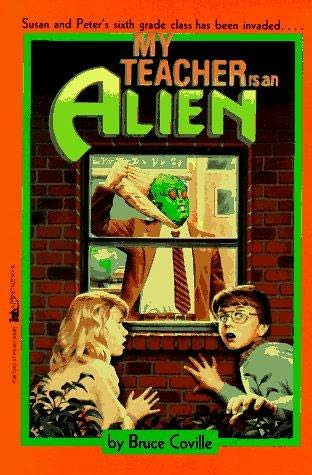 Coville: There is actual peril in this book. The alien teacher intends to take the best, worst, and three most average students back with him to his home planet, and there’s every chance our protagonist could be among them. Legitimately scary!

Sachar: There’s never any real danger for the kids, though teachers are fair game (one gets eaten).

Advantage: Coville. Reading these books as a kid, I always wanted to be a little thrilled at least. Coville keeps you on your toes.

Coville: Taken to a new level here. Our protagonist’s parents are fairly disconnected, though the dad less than the mom, and the teachers are pretty out to lunch. But one character’s single dad is so obtuse that he doesn’t notice when his son has a friend living at his house for a week, and then still doesn’t seem to notice when his son is abducted by aliens. Awesome.

Sachar: The adults are goofballs in this text, and complicit in the absurdity, but they are present and aware and act as allies to the children. And that’s no fun at all.

Advantage: Coville. This is my favourite round because it’s such an important trope in these other-worldly children’s chapter books. Adults aren’t around, so kids have to solve their dilemmas for themselves. It’s good for promoting a sense of autonomy, but it also just makes a better story.

Winner: Coville, with three out of a possible five categories. I have to be honest; I really thought Sachar would take this handily, but Coville’s construction of parents puts him over the top.

And PS, these would both make excellent gifts for the young readers in your life this holiday season.