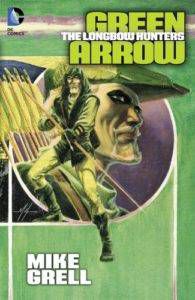 A few weeks ago, someone asked me to recommend some key Green Arrow comics, knowing that I was a fan. I went to my old standbys: Green Lantern/Green Arrow by O’Neil and Adams, Quiver by Smith and Hester, the current delightful run by Percy, Schmidt, and Ferreyra. Then I started to recommend The Longbow Hunters, with my usual caveats. And then I stopped.

If you’re not familiar with it, The Longbow Hunters is a three-issue miniseries from 1987, written and drawn by Mike Grell, in which Green Arrow and his partner Black Canary become the resident superheroes of Seattle. It’s very much part and parcel of a lot of trends of the eighties: it’s auteur-esque, with Grell switching visual styles and mediums to convey different moods. It’s “gritty,” to borrow an overused term, focusing on street and organized crime instead of supervillains with ray guns.

And it contains sexual assault. Specifically, Black Canary is captured by the villains of the piece and tortured in a deliberately sexualized fashion until Green Arrow rescues her, killing her tormentors in the process.

I’ve been a Green Arrow fan for years, and normally I just go ahead and recommend The Longbow Hunters, with a content warning to whoever I’m speaking to that the story includes assault – a gratuitous attack on a decades-old female character with no other narrative purpose than to spur the hero to commit murder.

But it’s a shame, because Dinah’s assault is a low point in a run that otherwise treats her very well. The Longbow Hunters was successful enough that DC gave Grell an ongoing series (beautifully drawn by Ed Hannigan and Dick Giordano), and in both the mini and the ongoing he portrays Dinah as a complex, intelligent, badass woman with her own life and her own agency, and her relationship with Ollie as nuanced, loving, mutually supportive (until it all falls apart) and joyfully sexual. 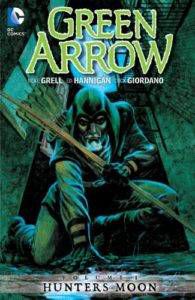 In fact, in the first arc of the ongoing series, Hunter’s Moon, Dinah realizes to her frustration that she can’t bear to have Ollie touch her after what she’s recently experienced. She wants to resume a sexual relationship with him, but can’t. They decide to go to couples counseling – and this being comics, their therapist is also a survivor of sexual assault and her former assaulter is threatening her again and Green Arrow has to stop him. It’s a story about defeating a bad guy, but more importantly, it’s a story about Dinah starting to feel comfortable in her own body again, and about two survivors talking about their experiences together. Neither Dinah nor Ollie is over the events of The Longbow Hunters by the end of Hunter’s Moon, but it’s still a story about healing.

In other words, Hunter’s Moon has everything The Longbow Hunters has – the exquisite art, the gritty tone, the compelling relationship between the leads – without the assault (or the extremely problematic Dragon Lady portrayal of supporting character Shado). But I never see Hunter’s Moon on rec lists, only The Longbow Hunters. And when asked for suggestions, I went immediately for the latter.

Part of this is because Hunter’s Moon only recently became available in trade. The popularity of Arrow, which was originally largely inspired by the Grell run, has encouraged DC to collect their Green Arrow back catalogue. And it’s only recently that the Big Two have started putting collecting basically everything in trade, a practice that used to be reserved for only their greatest hits. For literally decades, Green Lantern/Green Arrow and The Longbow Hunters – and Quiver, once it was published – were the only Green Arrow titles available in bookstores. Small wonder, then, that they were the ones continually recommended.

But what makes The Longbow Hunters a greatest hit in the first place? What qualifies it to remain perpetually in print? Why doesn’t sexual assault and racism disqualify it?

When I look at lists of must-read comics, I see the same books over and over again: Miller, Moore, Gaiman. Grell. White men who made their names in the 80s writing (and sometimes drawing) stories in which women are assaulted, raped, brutalized. I’m not denying that there’s a scale of attitudes towards women on display here – Gaiman is not Miller, and Gaiman of Sandman is not Gaiman of today – but how many books on those must-read lists feature women as victims? Conversely, how many feature women as protagonists?

It’s so easy to always champion the same things. They stay in print because we recommend them; we recommend them because they’re in print. And I’m not saying there’s nothing of value in the works I’ve referenced above, not when Sandman was one of the first comics I read and loved, not when I’ve read The Longbow Hunters and Miller’s Daredevil multiple times.

But I’m making it a personal goal to be more intentional about my recommendations from now on. Instead of saying “read this book, but look out for these terrible things,” I’m going to think a bit harder about what I can talk up that has the same pros, but fewer cons.

Suggestions are welcome, of course! What would you recommend instead of The Killing Joke? Instead of Watchmen? Instead of The Dark Knight Returns? Are they truly the only books out there that do what they do well? Or does every celebrated story need to involve a brutalized woman bleeding on the floor?

It’s a process, and no book is perfect. (To wit: Hunter’s Moon, despite the best of intentions, is clumsy in how it handles its recovery aspect – not to mention the use of dated language around race and a gay-bashing plotline.) I’m still going to wind up occasionally recommending comics by saying “It’s great, but…”

But I’m working on it. And the more I can minimize those caveats, the happier I’ll be recommending the books I love.