This is a guest post from Mamie Cox: Through a series of quite fortunate events, I found myself spending a magical year studying children’s literature at the University of Cambridge. When not getting riled up about something on Twitter, I am thinking about fan engagement in online spaces, and the ways in which literature for children and young adults can be better.

As a graduate student in children’s literature, I quickly learned that revisiting your favorite childhood stories as an adult is a dangerous game. It seldom lives up to your original experience and is really just asking for pain and shattered childhood memories.

So naturally, I do it as often as I can. 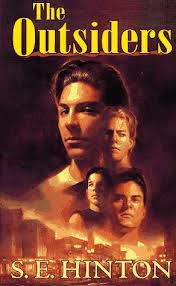 One particular day when I wanted to have my little heart broke, I decided to revisit the first book I ever truly loved: The Outsiders. Halfway through rereading Hinton’s novel, I was hit hard with the realization that the book I remembered was not the book I was reading.

Now, I’ll preface this by saying that it’s one thing to forget plot points of a novel you read once as a pre-teen — but this is not that. You guys, I was low-key obsessed. When I discovered The Outsiders at age 11, it was the first book I ever finished and immediately reread cover to cover. I checked it out so many times from my school library that when the time came for the tattered, stained copy to be updated, our librarian simply slipped it into my hands with a conspiratorial wink. Sodapop Curtis was my first literary crush and Robert Frost’s “Nothing Gold Can Stay,” was the first poem I ever memorized.

I watched the film with similar fervor, discovering my eternal love for Patrick Swayze at the ripe old age of 12. Through countless rereadings and movie viewings, I knew every plot-point and character inside and out, gaining a near encyclopedic knowledge on Hinton’s gang of greasers and the actors who portrayed them. If I had known about the concept of fandom as a pre-teen, or had any knowledge as to the existence of one for The Outsiders, you can bet that I would have been president.

So, I was understandably confused when I picked up The Outsiders a decade later and felt as if I were reading an entirely new story.  I was shocked to realize that I had not just forgotten bits and pieces, but had completely omitted key, climactic plot points, including Ponyboy and Johnny’s experience as runaways as well as both Dally and Johnny’s traumatic deaths. Even the violent interactions between the greasers and the socs felt like new territory.

So, what did I remember from my favorite childhood novel? Because it apparently wasn’t, you know, the actual plot.

Basically, I remembered the good stuff.

I remembered small character points, like  Two-Bit’s love of Mickey Mouse (which, upon rereading, I realize was actually only present in the film) and the Curtis brother’s childlike love of chocolate cake for breakfast. I remembered seemingly unbreakable bonds between brothers, thrown together by unfortunate circumstance and bonded together through true brotherly love and affection. I never forgot Two-Bit’s line to Ponyboy after he’s jumped by a group of socs coming out of the movie theatre: “Next time get one of us to go with you, Ponyboy. Any of us will.” While I never envied their situation, I did envy their closeness. I loved and remembered the novel for Ponyboy’s compassionate voice, and his desire to understand both his brothers and their rivals.

It’s telling  to realize that from what was surely the grittiest and most tragic book I had read up to that point in my young life, I only remembered the goodness.

I don’t think I blocked out the traumatic deaths of Johnny and Dally or the war between the greasers and the socs because they were too grim or I wasn’t emotionally ready to experience that kind of violence. I simply think that wasn’t the story I was looking for.

It’s no secret that middle school is hard. And as a painfully shy pre-teen who just admitted above to being in cahoots with the school librarian for free books, clearly I can  relate.  At a time when I was knee deep in the horrors of middle school, searching for both friends and understanding of my own, it’s understandable that I would want the same for the characters in my books. By amplifying the relationship between the greasers and focusing on their dependence on one another as opposed to their tragic reality, I allowed Ponyboy and his gang the same thing I looked for myself: connection, love, and acceptance.