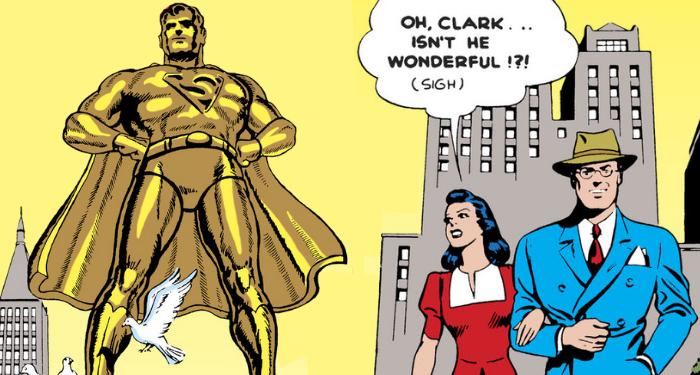 Superhero comics have many well-worn motifs which have been popularized, subverted, and scoffed at over the decades, like secret identities, reporter girlfriends, and radioactive everything. In Tropes in Capes, I’ll look at the history of these elements: how they got started, when and if they fell out of favor, and where they are now. Today: the reporter girlfriend!

In pastiches, parodies, and homages to superhero media, the superhero in question will almost always have a fast-talking, thrill-seeking journalist as (usually) his love interest. This is, of course, a tribute to Lois Lane, the first and greatest of superhero comics “newshens.” (Yes, they used that word. Sigh.) But scratch the surface of the genre and you’ll find a fair amount of other journalistic romances. Where did this trope come from and how did it become so iconic?

Clark Kent, Lois Lane, and the then-unnamed newspaper for which they worked all first appeared in Action Comics #1 in 1938. Though that first story explains Clark’s extraterrestrial origins, it doesn’t explain why he would choose to disguise himself as an ordinary human and work at a newspaper. That’s because it wasn’t necessary to explain to 1930s readers. As James Vance points out in his introduction to Superman: The Dailies, 1939-1940, “the press was respected by the public and feared by the corrupt. Decades before Woodward and Bernstein brought the notion back into vogue with their exposure of the Watergate scandal, journalists were seen as heroes who battled social injustice — a conviction and a concern obviously shared by [Superman’s creators] Siegel and Shuster […] even when the Man of Steel wasn’t around, it seemed that Clark and Lois were forever being threatened, kidnapped, and nearly murdered by gangsters and lowlifes in high places…just because they were reporters.”

Comics of the 1930s and ’40s abounded with heroic reporters, as did other media, and that often included women. Warner Brothers made nine movies between 1937 and 1939 about Torchy Blane, a heroic female journalist and an acknowledged inspiration for Lois Lane. Female reporters were the stars of comic strips like Jane Arden (1928) and Brenda Starr (1940); His Girl Friday hit theaters in 1940.

Lois was so popular and important to the Superman mythos, in fact, that early on she was given a regular backup feature in the self-titled Superman comic. Each Lois Lane generally opens either with her being given an obviously gendered puff piece to write, or being teased for not being able to get a story without Superman’s help. She then inevitably winds up stumbling into a crime of some sort and apprehending the criminals while also getting the scoop, always with plenty of slapstick involved. While Clark occasionally appears at the beginning or end of the story, Superman never does. These stories are silly, but they’re also a staunch defense of Lois’s skills and independence throughout the war years.

Though other reporters abounded in the Golden Age (Captain Marvel/Billy Batson, Green Lantern/Alan Scott, Johnny Quick/Johnny Chambers), surprisingly few contemporary comics emulated the Lois formula, though Liberty Belle’s alter ego Libby Lawrence was a radio columnist. A notable exception was the Blue Beetle’s love interest, Joan Mason, who is undeniably cast in the Lois mold, from her no-nonsense patter to the gun in her purse. But then, Blue Beetle was published by Fox Comics, who were sued by DC for plagiarism of Superman for the very first comic they ever published, so maybe they were the only publisher with the chutzpah to copy Lois so directly.

In the postwar years and moving into the Silver Age, Lois was sadly defanged. No longer was she slapping gangsters and busting crime rings; now she was trying to trick Superman into either proposing or admitting that he was really Clark Kent. As comics settled into staid mid-century paternalism (especially under the stultifying auspices of the Comics Code), other books began to hew closer to the Superman formula. Thus in 1948, Batman finally got a reporter girlfriend in the form of Vicki Vale, a very Silver Age character even if she technically debuted in the waning years of the Golden Age, and when Barry Allen debuted as the Flash in 1956 and kicked off the Silver Age, he came complete with reporter girlfriend Iris West.

Though Lois did get her own book in 1958 — and Superman’s Girl Friend, Lois Lane was a bestseller that ran for a whopping 16 years, which is nothing to sneeze at — Lois, Vicki, and Iris spent the ’50s and ’60s reporting on fashion shows, ribbon-cutting ceremonies, and parades honoring their respective heroes. Torchy Blane would have been disgusted.

Iris was killed in 1979, but Vicki and Lois eventually got to do more interesting things, and by the onset of what’s sometimes called the Modern Age of Comics, in the ’80s, the superhero girlfriend was firmly cemented as iconic, even if comics examples weren’t exactly thick on the ground. Out of Batman’s many potential love interests, it was Vicki Vale who hit the big screen with him in 1989’s Batman. Almost more tellingly, though she’s not exactly a girlfriend, the world’s most beloved superhero parody would come complete with a daring female reporter ally in 1987: Teenage Mutant Ninja Turtles and April O’Neil. Another famous superhero parody, the 2010 animated superhero parody Megamind, included a reporter love interest, the — of course — alliteratively named Roxanne Ritchi.

Reporter girlfriends (and love interests of all genders) remain most strongly associated with the Superman franchise, of course. The Kon-El/Conner Kent Superboy’s first love interest was the reporter Tana Moon, in 1993; Smallville inserted teen journalist Chloe Sullivan into Clark Kent’s high school days in 2001; Supergirl set up the dreamiest Jimmy Olsen yet as a love interest for its heroine in 2015 before swapping him out with the unbearable Mon-El; and last year, current Superman Jon Kent got his first boyfriend, Jay Nakamura, whose internet exposés call to mind the corruption-exposing Lois of the late 1930s. The Flash franchise also remained pretty loyal to the trope, with Wally West following in his uncle’s footsteps and falling for reporter Linda Park, who debuted in 1989.

Even more than every kid sidekick owes a debt to Robin, every reporter girlfriend owes a debt to the mighty Lois Lane. She set the trend so thoroughly that reporters and superheroes became indelibly linked in the public mind, even though they aren’t really any more common than secretary girlfriends or (sigh) model girlfriends. But there are plenty of worse characters to emulate ad nauseum than Lois. (Looking at you, Joker.) And besides, there’s something about figuratively and sometimes literally marrying a superhero to a character who represents the quest for truth that feels right and fitting.

So hats off to Lois Lane, and all her fast-talking, truth-telling, corruption-fighting sisters in ink. I love Superman, but at the end of the day, the reporter girlfriend will always be my hero.